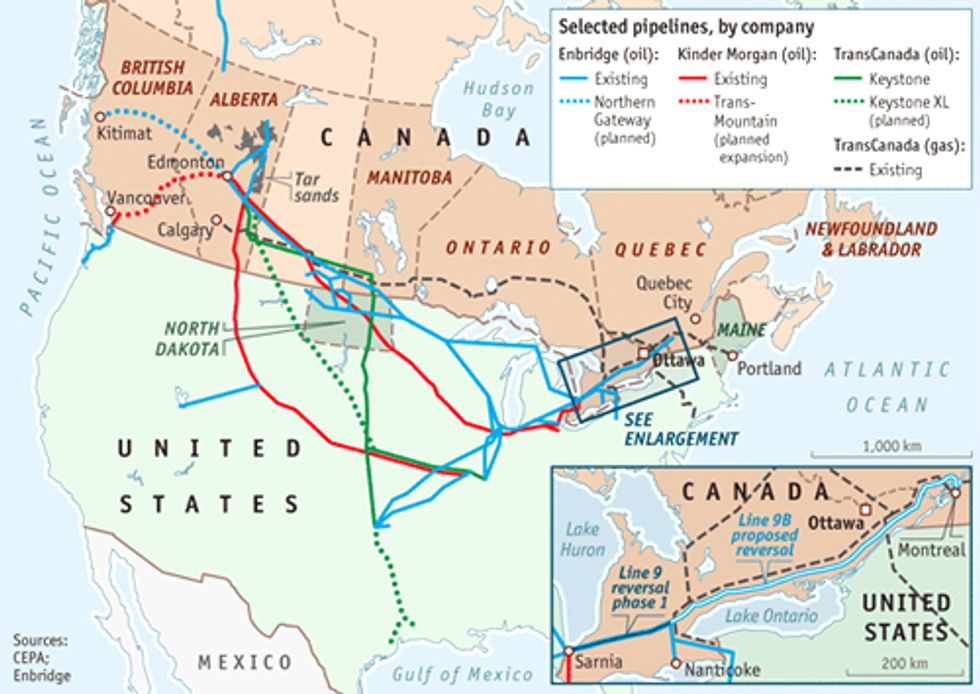 Pipeline giant Enbridge filed yesterday to seek approval to reverse its Line 9B pipeline to bring more dangerous tar sands oil eastward to Montreal for export. Groups in Canada and the U.S., including Environmental Defence, Greenpeace Canada and Natural Resources Defense Council, are calling on the Canadian National Energy Board to review the full scope of this tar sands proposal.

“This project could turn Ontario into a sewer for dangerous tar sands oil, putting communities at risk of oil spills into drinking water and onto farmland in the most populated part of the country,” said Adam Scott of Environmental Defence. “And all this to allow big oil to increase tar sands production and export.”

Several municipalities, including Hamilton, Toronto, Burlington and Mississauga situated along Line 9’s route have already taken the first step to protect the interests of their citizens, seeking answers on increased risks to water, health and the natural environment from the proposal.

In yesterday’s formal application to Canada’s National Energy Board, Enbridge seeks approval to reverse the flow of its Line 9 pipeline to Montreal to transport “heavy crude” oil from western Canada to the east coast, increasing the flow of the pipeline by 25 percent to 300,000 barrels per day. In the application announcement, Enbridge and the National Energy Board acknowledge the line may carry “heavy crude” and its purpose would be to access “western Canadian crude.”

The National Energy Board is required to review all major pipeline projects or modifications in Canada, and has already approved reversal of part of Line 9 between Sarnia, Ontario and Montreal. Citizens from the U.S. and Canada had previously submitted 41,000 comments to the Canadian National Energy Board opposing the first phase of the pipeline reversal.

It is widely understood this filing is part of a larger oil export plan to move tar sands out of Alberta, east through Montreal and down to Maine, raising similar concerns south of the border.

“Communities all over New England are rightfully concerned about increased risks to rivers and lakes from tar sands pipelines, with dozens of citizen-organized educational meetings and protests occurring over the last six months, and thousands of people in the region signing petitions against the pipeline,” said Danielle Droitsch of the Natural Resources Defense Council.