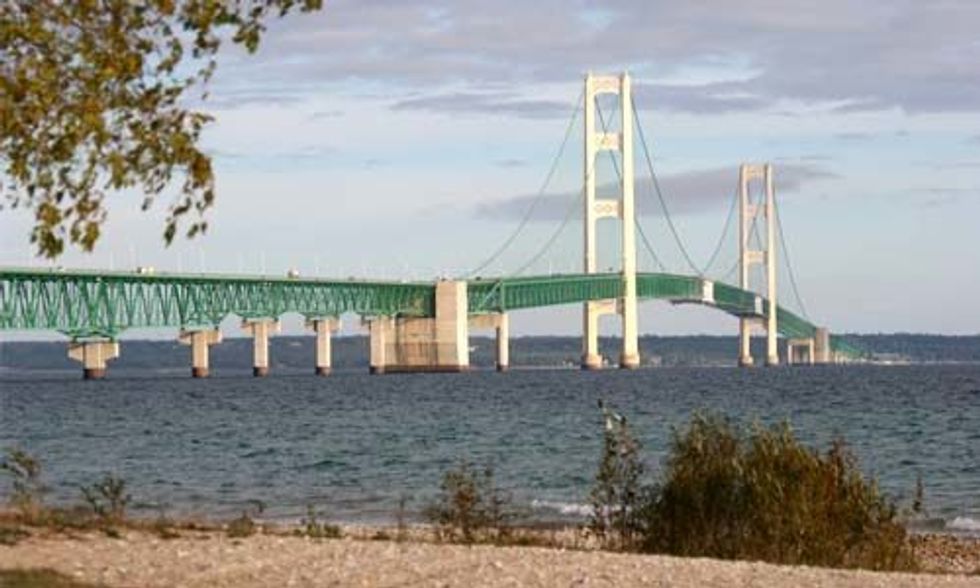 The Straits of Mackinac is a narrow waterway that separates Michigan's lower peninsula from its upper peninsula. The straights connect two of the Great Lakes: Lake Huron and Lake Michigan. But underneath this iconic part of the Great Lakes are two 62-year old pipelines.

The pipelines have never been replaced, despite the well-documented risk of a rupture. "If just one of the pipelines ruptured, it would result in a spill of 1.5 million gallons of oil—and that’s if Enbridge, the company that owns them, is able to fix the pipeline immediately," says Motherboard. “I can’t imagine another place in the Great Lakes where it’d be more devastating to have an oil spill, University of Michigan research scientist Dave Schwab told Motherboard.

Enbridge does not have a good record when it comes to spills either. It's responsible for more than 800 spills between 1999 and 2010, totaling 6.8 million gallons of spilled oil. And in 2010, it spilled more than 800,000 gallons into the Kalamazoo River in Michigan—creating the biggest inland oil spill in the country's history. It did not receive as much national attention because the country was fixated on another oil spill: the BP oil spill in the Gulf of Mexico.

Enbridge maintains that the pipeline, which was only supposed to last 50 years, is still in working order. Others beg to differ. After nearly two years of pressing Enbridge and pipeline regulators to release information about the integrity of the pipelines, the National Wildlife Federation was finally fed up and conducted its own diving expedition to survey them in 2013. Their footage revealed "some original supports broken away—indicating the presence of corrosion—and some sections of the suspended pipelines covered in large piles of unknown debris."

Last month, Motherboard correspondent Spencer Chumbley went to Michigan to investigate. Watch here to find out what he discovered: