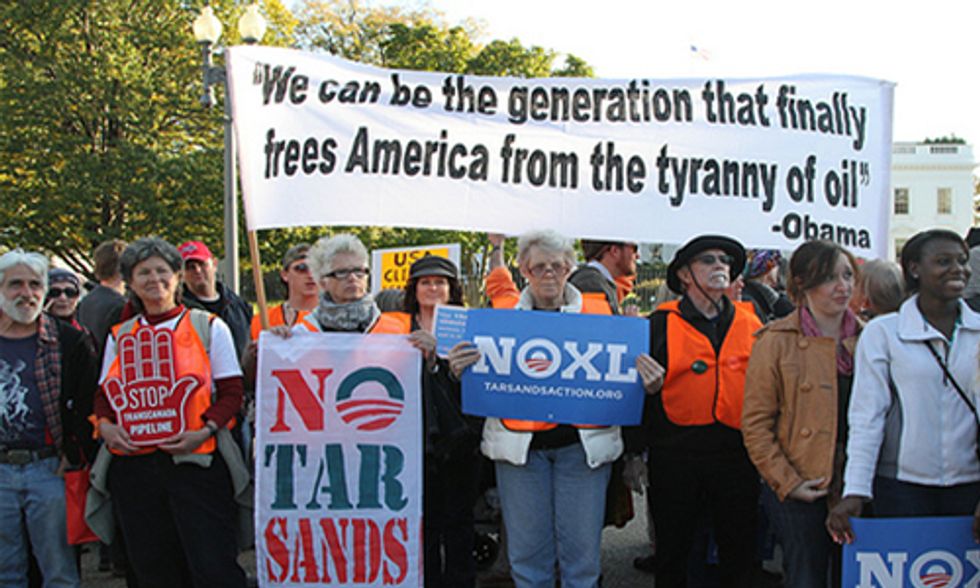 In a narrow victory for common sense, yesterday the Senate rejected an attempt to legislate approval of the Keystone XL tar sands pipeline. Senators like California's Barbara Boxer, Hawaii's Brian Schatz and Virginia's Tim Kaine stood up as environmental champions and deserve our thanks for their leadership. But since the beginning, the decision on the pipeline has belonged to President Obama, so there's no good reason for the Senate to have wasted time on trying to circumvent the approval process.

More than 12,000 people showed up to circle the White House on Nov. 6, 2011 in a call to President Obama to reject the proposed Keystone XL tar sands pipeline. Photo credit: Sierra Club

The bigger issue, though, is that there's no good reason to support Canadian tar sands expansion, much less allow more dirty tar sands oil into our country. Even though everything about tar sands oil is destructive, dirty and dangerous, oil companies (and their champions on the Hill) are determined to bring as much of it as they can across our border, even if it means bending, breaking or changing the rules. TransCanada failed this week to get the Senate to do an end run, but another tar sands company, Enbridge, has been having more success in a different branch of government.

Enbridge somehow has convinced the State Department to approve its Keystone XL-sized tar sands pipeline expansion. That's right, this is the same company responsible for the largest onshore oil spill in U.S. history, which contaminated 35 miles of Michigan waterways and wetlands in 2010 with diluted bitumen from tar sands. If Enbridge's expansion of its Alberta Clipper pipeline goes through, the increase in tar sands exports will be equivalent to building 20 new coal-fired power plants.

How did this happen? Enbridge had applied to the State Department to expand the Alberta Clipper back in 2012, which was necessary because, like Keystone XL, the pipe would cross our border with Canada. Since then, the State Department has been going through the environmental review process required by law before making a decision. But Enbridge got tired of waiting. Tar sands producers aren't in it for the long haul—they're eager to cash in while their extreme oil is still economically viable.

Give them points for chutzpah. But, in fact, the State Department has jurisdiction over the entire border, including Line 3. Both pipelines operate under the permission of the State Department. The permits for both pipelines prohibit these kinds of operational changes, and the State Department has the authority to revoke or terminate either permit at any time. Not surprisingly, Enbridge also ignored that the State Department's job is to evaluate whether increased tar sands oil imports into the U.S. are in our national interest, including climate impacts. Just last week, the White House reaffirmed that it is "firmly committed" to that process, which is why we expect President Obama to veto any future legislative attempts to shove Keystone XL down our throats.

Not everyone in his administration, though, seems to have gotten that message, because in July the State Department replied to Enbridge's blatant attempt to avoid the Alberta Clipper permitting process by agreeing that the expansion could go forward.

Maybe we shouldn't be surprised. After all, this is not the first time that the State Department's ties to the oil industry have raised eyebrows. Twice it has ignored its own conflict-of-interest procedures and come under fire for hiring oil-industry groups to write the environmental impact statements for Keystone XL. The resulting reports naturally downplayed Keystone XL's negative impacts despite overwhelming evidence to the contrary. In this case, it appears that the State Department privately met with Enbridge to discuss this new scheme as far back as June 3, yet nothing was disclosed to the public until almost three months later. In addition, the State Department has refused to disclose crucial permitting documents despite Sierra Club requests under the Freedom of Information Act.

That's why the Sierra Club, together with a coalition of environmental and tribal allies, has filed a lawsuit challenging Enbridge's illegal scheme to nearly double the amount of tar sands coming across our border, while avoiding public review and the presidential permit process.

Once again, though, it's important to remember that the stakes extend far beyond the approval of any single pipeline—whether it's proposed by Enbridge or TransCanada. We should be looking for ways to avoid—not encourage—extreme oil sources.