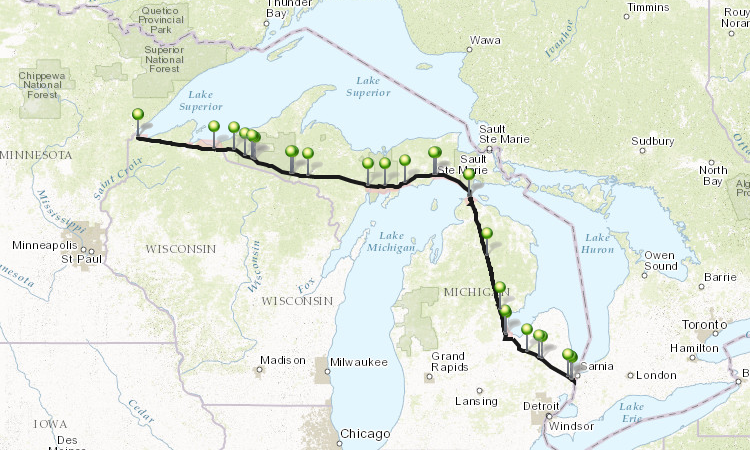 Enbridge Energy Partners‘ aging Line 5 pipeline, which runs through the heart of the Great Lakes, has spilled more than 1 million gallons of oil and natural gas liquids in at least 29 incidents since 1968, according to data from the federal Pipeline Hazardous Materials Safety Administration obtained by the National Wildlife Federation.

Built in 1953, the 645-mile, 30-inch-diameter pipeline carries petroleum to eastern Canada via the Great Lakes states. As it travels under the Straits of Mackinac, a narrow waterway that connects Lake Michigan and Lake Huron, Line 5 splits into twin 20-inch-diameter, parallel pipelines.

Line 5 opponents fear that a spill in the Great Lakes, which contains 21 percent of the world’s surface fresh water, would be an ecological disaster. Notably, the straits’ strong currents reverse direction every few days and a spill would quickly contaminate shoreline communities miles away.

Enbridge is behind a number of major spills, most notoriously in 2010 when an Enbridge line spilled more than 800,000 gallons into the Kalamazoo River in Michigan—creating the biggest inland oil spill in U.S. history.

“We have a pipeline system with a history of problems running through our country’s largest source of surface freshwater, and it happens to be operated by the company responsible for one of the largest inland oil spills in North America,” said Mike Shriberg, executive director for the National Wildlife Federation’s Great Lakes Regional Center.

“This pipeline system places the Great Lakes and many local communities at an unacceptable risk. The state of Michigan needs to find an alternative to this risky pipeline to protect our drinking water, health, jobs and way of life.”

The National Wildlife Federation has released a new interactive map showing what has spilled from Enbridge’s pipeline system, the repair methods that have been used, and how leaks and defects are being discovered.

The conservation organization noticed from the records that only one of the 29 recorded incidents was detected by a remote pipeline detection system. By contrast, 15 releases were detected by local personnel or the public.

“This new information causes us grave concern about the integrity of the inland pipe system, inconsistencies with spill reporting, and the effectiveness of leak detection systems, repair methods, and long-term planning for the integrity of the decades-old pipeline system,” said Beth Wallace, the National Wildlife Federation pipeline safety specialist who discovered the newly released data.

Wallace added, “a significant number of these releases note manufacturing and construction defects, as well as weld failure, which calls into question the overall integrity of the Line 5 system.”

Last September, Enbridge filed a work plan with the U.S. Environmental Protection Agency identifying 18 “holidays” on Line 5—an oil and gas industry term that refers to areas on a pipeline where anti-corrosive coating is missing. However, Enbridge’s director of integrity programs Kurt Baraniecki said at a Pipeline Safety Advisory Board meeting last month that the report used imprecise language.

“This is not new information and we have addressed this issue many times in the past,” company spokesperson Ryan Duffy said via email to MLive. “Over the past fifteen years, there have been three incidents on Line 5 that have resulted in a total of approximately 21 barrels of product being released off the mainline. All of the product released during these three incidents was recovered. There has never been an incident on Line 5 at the Straits.”

Still, as InsideClimate News reported, Line 5 is facing mounting political pressure. In January, the Bad River Band of the Lake Superior Tribe of Chippewa Indians in northern Wisconsin voted not to renew easements that allowed the pipeline to pass through tribal lands. Also in January, U.S. Reps. Dave Trott (R-Mich) and Debbie Dingell (D-Mich) introduced legislation calling for a shutdown of the pipeline if a federal study determines it poses significant threat to the Great Lakes.

Enbridge is not the only pipeline company facing opposition over fears of contamination. On Tuesday, a coalition of more than two dozen organizations launched a new campaign to challenge Energy Transfer Partners‘ (ETP) operations.

Dallas-based Energy Transfer Partners is the company behind the controversial Dakota Access Pipeline, the proposed Bayou Bridge Pipeline and the under-construction Rover Pipeline, which just spilled 2 million of gallons of drilling fluids into two of Ohio’s wetlands on April 22.

The coalition has fired off an open letter to the company outlining their grievances and demands. The group has also launched the website StopETP.org as an online hub for the campaign.

ETP is expected to vote to merge with Sunoco Logistics on Wednesday.

“Energy Transfer Partners and Sunoco Logistics have a damning history of pipeline fires, leaks, and spills, causing millions of dollars in property damage and leaving thousands of gallons of hazardous products in the environment,” said Marc Yaggi, executive director of Waterkeeper Alliance, one of the participating organizations. “These incidents demonstrate a blatant disregard for the communities and waterways impacted by these pipelines.”

Lena Moffitt, director of Sierra Club’s Beyond Dirty Fuels campaign, said momentum has been building across the nation.

“From Standing Rock, to Texas, to Ohio, to towns across the country, people are mobilizing against Energy Transfer Partners and its reckless agenda that has threatened our communities, our clean air and water, and our climate,” Moffitt said. “We the people are organized, we are determined, and together, we will stop Energy Transfer Partners’ dirty and dangerous plans.”