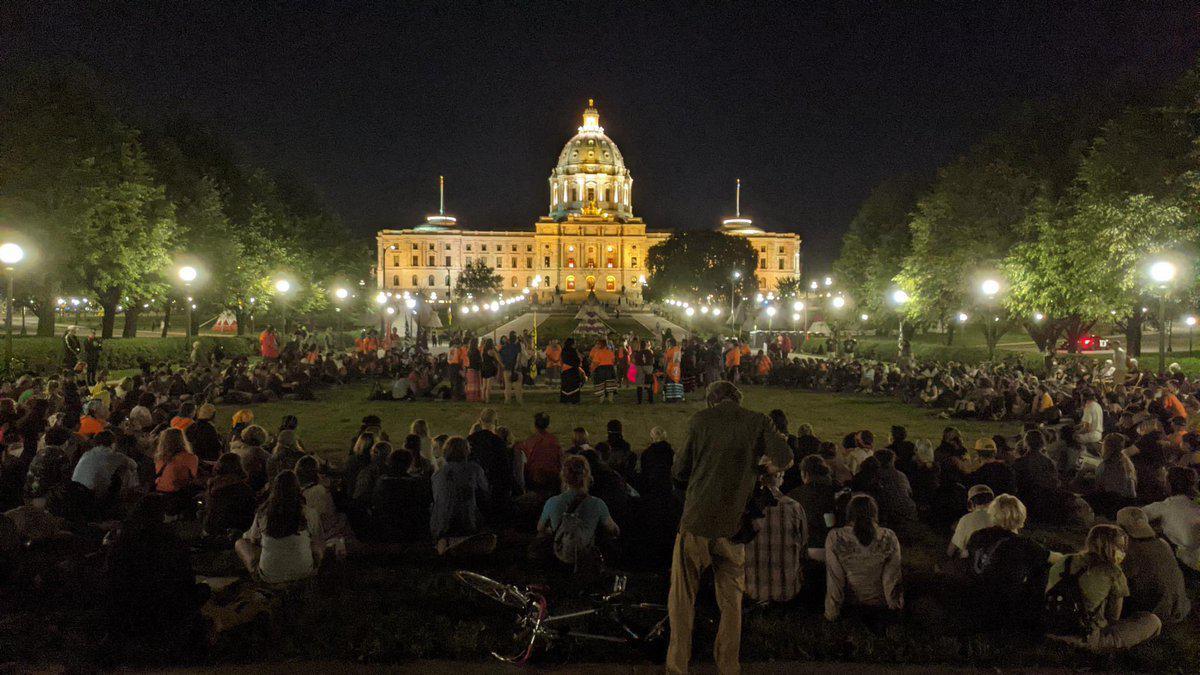 Demonstrators protest the Line 3 pipeline on the grounds of the Minnesota State Capitol on Aug. 25, 2021. RootsAction

With Enbridge on the verge of completing its multibillion-dollar Line 3 pipeline, thousands of Indigenous leaders and environmentalists brought their protests against the sprawling tar sands project to the grounds of the Minnesota state capitol building on Wednesday to demand that lawmakers intervene before the dirty oil starts flowing.

Roughly 2,000 demonstrators — including Indigenous leaders who marched over 250 miles along the pipeline’s route — rallied at the capitol Wednesday afternoon and hundreds stayed through the night as Minnesota police officers guarded the building’s perimeter, which was surrounded by a chain-link fence installed in anticipation of the protest.

“The cops are gathered here by the hundred and the governor’s brand new fence glimmers in the background, but our spirit is resolved,” the Resist Line 3 Media Collective tweeted as pipeline opponents prepared to camp on the lawn of the capitol building. “We’re staying.”

There’s been a beautiful ceremony in front of the Minnesota state Capitol led by Indigenous elders and water protectors all day. We are fortunate to have been in community with everyone here.

Part of a “Treaties Not Tar Sands” week of action against Line 3, Wednesday’s demonstration came after the Minnesota Supreme Court let stand state regulators’ decision to greenlight construction of the massive oil project, leaving the movement with dwindling legal options. If completed, the pipeline will have the capacity to carry around 750,000 barrels of tar sands oil each day from Alberta, Canada to Wisconsin, traversing hundreds of bodies of water and wetlands along the way.

With the pipeline on track to be operational as soon as next month, water protectors are vowing to ramp up their opposition. To date, around 900 people have been arrested for engaging in civil disobedience at anti-Line 3 protests, which have frequently been met with violent police crackdowns.

“We’re here in ceremony. We’re here to assert our treaty rights and our right to exist and our right to clean water,” Nancy Beaulieu, a founder of the Resilient Indigenous Sisters Engaging Coalition, said during the rally Wednesday. “Line 3 violates our treaty and all the treaties along the Mississippi because the water flows. This is a people’s problem, this is not just a Native issue here.”

The U.S. portion of the near-complete Line 3 project involves the replacement of more than 300 miles of existing pipeline, which is part of a system that extends 1,097 miles.

First approved during the Trump administration, the pipeline has won the backing of the Biden Justice Department, which filed a legal brief defending the project in June — outraging environmental leaders who said the move ran counter to the Biden administration’s promise to treat the climate crisis as an existential emergency.

Tim Walz, Minnesota’s Democratic governor, has also voiced support for completion of the Line 3 project, despite warnings that it poses a threat to tribal lands and waters as well as the climate, with its contribution to the nation’s planet-warming carbon emissions. One estimate suggests the Line 3 expansion project could have the equivalent climate impact of 50 new coal-fired power plants.

Winona LaDuke, executive director of the Indigenous-led environmental group Honor the Earth, told The Associated Press that Minnesota police “have arrested 800, almost 900 people all for a Canadian corporation to make a buck in the middle of climate chaos.”

“It’s poor policy and it’s worse practice,” said LaDuke, “and we’re here to ask the governor why he continues with such egregious policies and how we’re going to change that.”

Today 1000s of water protectors from across race, occupation, and generation came together at the MN capitol.

And when our politicians violate them we rise up. #stopline3 pic.twitter.com/olugTmAnvQ

In a tweet late Wednesday, Rep. Ilhan Omar (D-Minn.) expressed solidarity with the Line 3 opponents “protesting for a livable planet, and for our future in Minnesota.”

Last week, Omar joined Rep. Pramila Jayapal (D-Wash.), Sen. Jeff Merkley (D-Ore.), and dozens of other members of Congress in calling on the Biden administration to immediately suspend the federal Clean Water Act permit allowing the construction of Line 3 and “undertake a thorough review” of its predecessor’s permitting process.

“This pipeline’s dangerous effects on the environment, surrounding communities, and Tribal groups will be irreversible,” said Jayapal, the chair of the Congressional Progressive Caucus. “The Biden administration must immediately suspend Line 3’s Clean Water Act permit and conduct a full environmental impact statement.”