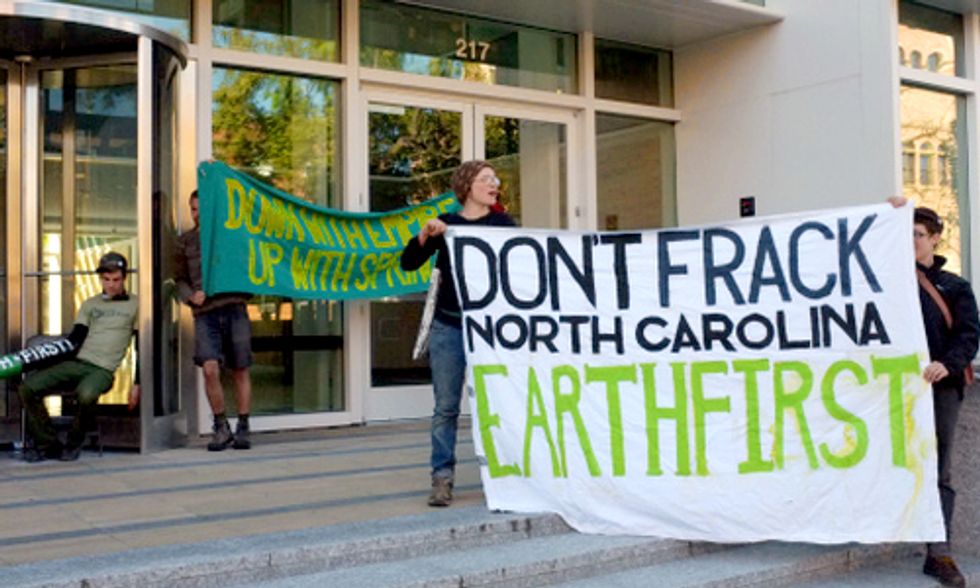 In North Carolina, Halliburton and other fracking industry interests helped write a fracking chemical disclosure bill. But when that bill ended up requiring disclosure of harmful chemicals to the state environmental agency, the bill was killed and replaced with one that further limited disclosure of the chemicals used in fracking.

A cache of emails obtained by Greenpeace has revealed the cozy relationship between the hydraulic fracturing industry and North Carolina’s Mining and Energy Commission.

The Mining and Energy Commission (MEC) was set up after an errant vote by a state senator legalized fracking in North Carolina. Because the state had not seen oil and gas drilling in recent history, the Mining and Energy Commission was tasked with writing oil and gas regulations, specifically for fracking. The 15 members of the MEC propose regulations for fracking which are then passed on to the North Carolina legislature to be turned into law.

Halliburton has played a significant role in shaping potential fracking regulations in North Carolina. In March of 2013, the Commissioners approved a chemical disclosure bill in committee which would have required fracking companies to disclose to the North Carolina Department of Environment and Natural Resources (DENR) the chemical ingredients in fracking fluid, many of which are extremely toxic. However, Halliburton, a major fracking services company, raised some reservations which killed the bill, as AP reporter Michael Biesecker confirmed:

In an interview with AP, Mining and Energy Commission Chairman Jim Womack acknowledged that before deciding to delay the vote, he spoke with a senior Halliburton executive.

“They indicated to me in a phone conversation that there may be other options than what was written in that rule,” Womack said.

The bill was taken off the agenda by Womack, and sent back to be rewritten by the chemical disclosure committee. Commissioner Womack himself is not worried about water contamination from fracking. He once said:

“You’re more likely to have a meteorite fall from the sky and hit you on the head than you are to contaminate groundwater with fracking fluid percolating up from under the ground.”

Halliburton has always cast a long shadow over the MEC. Commissioner Vikram Rao was at Halliburton for more than 30 years, ultimately as the company’s Senior Vice President and Chief Technology Officer. He maintains a significant financial stake in Halliburton, and also has more than $10,000 invested in BioLargo, a company involved in disposal of fracking wastewater.

Rao has also called the idea of disclosing the contents of frackfluid “a joke.”

Documents obtained by Greenpeace also reveal that the shale industry was close with one commissioner in particular: George Howard, the pro-fracking conservationist.

George Howard serves as vice chairman of the MEC, and as the chairman of the chemical disclosure committee, which is tasked with creating regulations for frack fluid and other fracking chemicals. He was appointed by North Carolina’s Senate President Pro-Tem Philip E. Berger to serve in one of two “conservation” slots on the MEC. Berger received $46,700 in campaign contributions from fracking interests between 2009 and 2011.

In his tenure as Mining and Energy Commissioner, George Howard has been a strong proponent of hydraulic fracturing. He has said that public fears around fracking are exaggerated and that responding to public pressure is “pandering.” He has also claimed “it is physically impossible for hydraulic fracturing—the full industry term for fracking—to contaminate underground aquifers.”

In addition to serving as commissioner for the MEC, Howard is the founder and CEO of Restoration Systems, an environmental remediation company. Through Restoration Systems, Howard has a significant financial stake in the fracking industry, including a multi-million dollar shale play project in Pennsylvania. Howard has also invested in the area of North Carolina most likely to be leased by fracking companies.

Howard is connected to other top regulators, especially John Skvarla, the Head of North Carolina’s DENR, who was president of Restoration Systems before becoming an environmental regulator. DENR would be the agency responsible for enforcing fracking laws recommended by the MEC.

Documents obtained by Greenpeace include correspondence between George Howard and various representatives of the oil and gas industry during the creation of the first chemical disclosure bill. Howard had multiple meetings with the American Petroleum Institute (API) and spoke with high-ranking members of ANGA. Howard specifically requested help from EID, an oil and gas front group run by the PR firm FTI Consulting and funded by the fracking industry. Howard asked Steve Everley, the spokesman for EID and an FTI Consulting operative, to help him prepare for a MEC meeting on chemical disclosure.

Bowen Heath, who represents the oil and gas industry for the lobbying firm McGuire Woods

Although George Howard met with and solicited information from multiple shale industry groups, one lobbyist was particularly influential. Bowen Heath, who represents Halliburton, Koch Industries and various other oil and gas interests for the lobbying firm McGuireWoods, had unparalleled access to the Commission. Emails reveal a chummy relationship between George Howard and Heath, who spent evenings together and went for beers in the afternoons.

Heath used that access to advocate for a fracking chemical disclosure system that allows generous exemptions for chemicals that companies deem “trade secrets.”

Heath provided a fracking chemical disclosure bill to Howard that the shale industry and its political allies previously passed in Colorado. The Colorado bill was based on a model bill from the American Legislative Exchange Council (ALEC), a corporate-funded group dedicated to passing legislation approved by ALEC’s corporate funders, including fracking companies like Chesapeake Energy. Bo Heath has longstanding ties to ALEC, and has attended ALEC annual meetings.

A New York Times investigation found that the Colorado chemical disclosure bill was the handiwork of one ALEC funder in particular, ExxonMobil.

As part of the push for the ALEC fracking bill passed in Colorado, Bo Heath arranged for Colorado ex-governor Bill Ritter to fly down to North Carolina to meet with George Howard and the MEC. The AP confirmed that Ritter’s fees and expenses were not paid by the MEC, and Bo Heath’s lobbying group refused to comment on Ritter’s funding.

Hallmarks of the ALEC fracking bill include generous exemptions from disclosure for “trade secrets,” and reliance on the FracFocus website for disclosing chemicals to the public. FracFocus’s operational costs are paid for by the oil and gas industry lobbying groups API and ANGA. FracFocus was found to be “severely lacking” as a regulatory tool by a recent Harvard study.

Heath continued to advocate for the industry/ALEC approach to chemical disclosure, and even brought in a key member of FracFocus, Mike Paque. Paque is the executive director of the Ground Water Protection Council (GWPC). The GWPC has long been an ally of the oil and gas industry, receiving funding from the American Petroleum Institute and other industry affiliates. Reports produced by GWPC are the backbone of the oil and gas industry’s claims about the safety of fracking. The GWPC also runs the FracFocus website, and advocates for its use.

Emails between Bowen Heath and George Howard obtained by Greenpeace.

Taking up his drinking buddy’s suggestion, George Howard selected Paque as an expert witness for the MEC. Paque presented the industry-funded FracFocus website in an unrecorded meeting on Dec. 18, 2012.

In the end, even though the bill that George Howard passed through committee was shot down by Jim Womack and Halliburton, it contained most of what Bo Heath and other industry lobbyists wanted. It used the API, ANGA funded website FracFocus for disclosure of chemicals, and exempted chemicals deemed trade secrets from being disclosed to the public on that website. However, Halliburton killed the bill because it required disclosure of all chemicals to the Department of Environment and Natural Resources.

The new bill, which has passed through the MEC committee and is headed for ratification in the State House of North Carolina, included a requirement to use the FracFocus website, following the ALEC fracking model legislation passed in multiple states. And like those states, trade secrets are not disclosed to the state, or the public.

64 Groups From Across U.S. Demand Federal Limits on Air Pollution From Fracking Wells