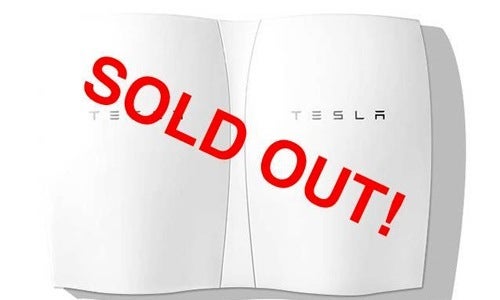 Demand for Tesla Energy’s revolutionary battery “has been crazy,” according to the company’s founder and CEO Elon Musk. Yesterday, in a second quarter earnings call, Musk revealed there have been more than 100,000 reservations (roughly worth $1 billion) of the rechargeable lithium-ion batteries, which have sold out through 2016.

While Tesla is mostly known for its auto industry-disrupting electric cars, the company isn’t shy about wanting to wean the world off of fossil fuels through its suite of batteries as well. The Powerwall offers homes and small businesses the means to use and store energy generated from residential solar panels or when utility rates are low. The larger Powerpack (for large businesses and utilities) allows battery owners to store excess energy on site, or as Forbes contributor Jeff McMahon explained in a report, the “batteries allow utilities to store energy when demand is low and use it when demand is high, without turning on more power plants.”

As Musk boasted during his call, “You can basically, in principle, shut down half of the world’s power plants if you had stationary storage.”

“The fundamental economics of cost are always true, meaning there’s always a cost advantage of system-wide implementation of stationary storage because of high peak to trough of electricity usage,” Musk said.

The energy stored by Tesla’s batteries doesn’t necessarily have to come from renewables, Musk pointed out. “It seems like people link this too much to renewable energy,” he said. “Of course we are great believers in renewable energy, but that is not the gating function for stationary storage.”

Chief technical officer JB Straubel reported during the call that 70 percent of the battery reservations have been for the Powerpack and 30 percent for the Powerwall.

Musk also said his company plans to sell $40-$50 million in batteries in the fourth quarter and will ramp up battery production (undoubtedly at Tesla’s massive Gigafactory in Nevada once it’s complete) in the coming years to meet the predicted demand.

Watch Musk’s Powerwall keynote in the video below.