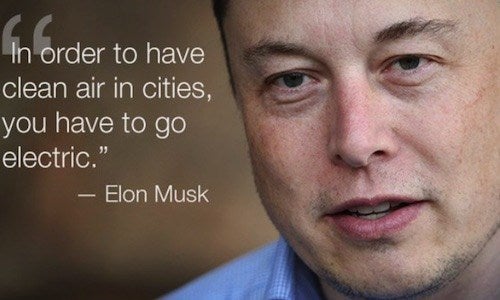 Tesla CEO and multi-hyphenate entrepreneur Elon Musk spoke about the electric vehicle (EV) market and its role in a sustainable energy future in an interview with CNN’s Kristie Lu Stout at the StartmeupHK Festival in Hong Kong this week.

Electric cars are 'important to the future' of China – @elonmusk https://t.co/G0UT7sBB2J $TSLA pic.twitter.com/ieg1t91wo7

Global demand for EVs has rapidly grown, and Musk—who famously opened up his patents for outside use—says he welcomes competitors such as GM’s Chevrolet Bolt and has even partnered with traditional automakers such as Mercedes and Toyota.

Musk said the goal of Tesla has been to “accelerate the advent of sustainable transport.”

Still, with no end in sight to the current glut of cheap oil, Musk admitted during his interview with Stout that “the transition to sustainable energy [will be] more difficult,” however, he said that Tesla aspires to make a car “so compelling that even with lower gas prices that’s still the car you want to buy.”

When asked by the host about the hotly anticipated Model 3—aka Tesla’s mainstream EV—Musk didn’t give many details about its specs but said it would be a smaller version of the luxury Model S without as many bells and whistles but at price point that’s roughly half.

“I think that’s going to the most profound car that we’ve made because that’ll be a very compelling car at an affordable price,” he said.

Musk—who believes electric cars “are the future”—has spoken about this ever-expanding sector before. Earlier this month, he even brushed aside Apple’s long-rumored foray into the EV market, saying it’s an “open secret” that the tech company is coming out with a rival electric car.

It appears that Musk is making a strong push to drive EV sales in China. Hong Kong has “the most number of Teslas per capita” and that China’s vast Supercharger network means you can drive from Beijing to Tibet in a Model S, according to Musk.

In a separate interview with Stout on CNN Money, Musk said that government policies in China are inevitably moving toward reducing emissions and favoring electric vehicles.

“I think there is an understanding by the Chinese government that [electric vehicles] are important to the future,” Musk said. “In order to have clean air in cities, you have to go electric.”

Back at the forum, Stout asked the SolarCity chairman and clean energy advocate if densely packed vertical cities such as Hong Kong have a viable market for residential solar panels. While Hong Kong might not have the best real estate for rooftop arrays, Musk said that city could tap into solar energy produced in China.

“It’s true that in dense cities rooftop solar is not going to solve the energy need, but what you can do is [install] ground-mounted solar power near Hong Kong and tap into the existing power lines that are coming in [to the city],” Musk said. “You can supply Hong Kong with the solar power [it needs] from a land area that’s not too far away.”

He also suggested that China, which happens to be the world’s biggest producer of greenhouse gases, can “easily” generate enough solar power to satisfy its power needs.

“China has actually an enormous land area much of which is hardly occupied at all. Given that the Chinese population is so concentrated along the coast, once you go inland the population in some cases it is remarkably tiny. So you can easily power all of China with solar. Easily,” he said about the world’s most populous country.

The wide-ranging interview also covered Musk’s plans for a Tesla truck and a Tesla submersible (but “I think the market for submarine cars is quite small”). The SpaceX CEO even dished on his plans for space travel and said human missions to Mars could begin by 2025.

“This will be an incredible adventure, the greatest adventure ever, and there needs to be things that inspire people,” he said about a manned-mission to Mars.

“The reasons why you get up in the morning can’t just be solving problems. It’s gotta be something great’s going to happen in the future.”

You can watch the full interview here: