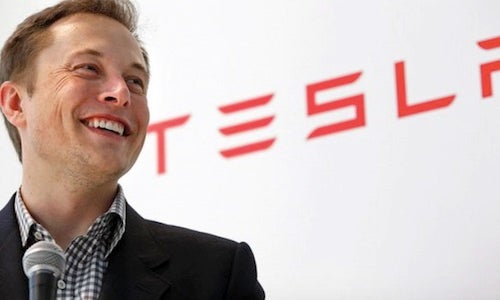 During an interview at the World Energy Innovation Forum (WEIF) at Tesla’s Fremont, California factory Wednesday, Elon Musk criticized fossil fuel subsidies as well as the alleged “propaganda” tactics deployed by Big Oil and Gas to tarnish his companies, including Tesla, SolarCity and SpaceX.

“The fundamental issue with fossil fuels is … every use of fossil fuels comes with a subsidy,” Musk said in his talk with forum organizer and DBL Partners venture capitalist Ira Ehrenpreis.

According to the Tesla CEO, cheap oil and gasoline prices not only prevent drivers from switching their gas-guzzlers to electric cars, it also deters the fight against climate change.

Musk explained that the well-funded fossil fuel industry isn’t even paying for their contribution to environmental destruction.

“It would be like if you could just dump garbage in the street and not pay for garbage pickup,” he said.

Citing data from the International Monetary Fund (IMF), Musk lamented he’s “competing against something that has a $6 trillion per year subsidy,” and that the low gas prices that subsidies create are “weakening the economic-forcing function to sustainable transport and clean energy in general.”

Musk suggested that a carbon tax would help curb Dirty Energy’s emissions but passage of such a policy would be “hugely politically difficult” and that politicians usually pick the easier path of providing subsidies for electric cars, “even though gas cars are getting a bigger subsidy.”

"The only two American car companies that haven't gone bankrupt are Ford and Tesla." Elon Musk at #WEIF2016 pic.twitter.com/VOkm8yvaf5

–like$6 trillion per year,” Musk said. “Then some representatives from the oil and gas industry added up all the incentives that Tesla had received and will receive in the future, which happens to coincide with the $6 billion figure.”

“We need to appeal to the people–educate people to sort of revolt against this and to fight the propaganda of the fossil fuel industry which is unrelenting and enormous,” he concluded.

Earlier in his talk, Musk also predicted that autonomous cars are the future of transportation.

“It’s going to become common for cars to be autonomous a lot faster than people think,” Musk said, adding that half of all new cars will have self-driving technology within seven to 10 years.

“It’ll just be something where it’s odd if it’s not in your car. Like not having GPS or something like that, but even bigger. It’ll just be normal,” he said.

The entire interview was captured by Electrek in the video below. Musk’s discussion about the fossil fuel industry starts around the 18:30 mark.