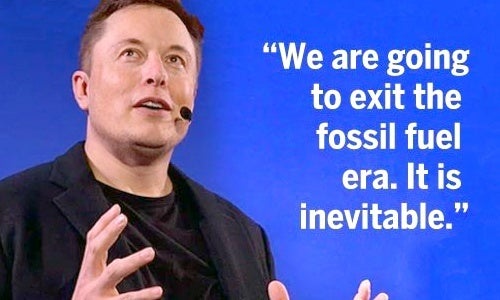 Speaking to students at the Sorbonne University in Paris, Elon Musk said we need a price on carbon similar to the one abolished in Australia to halve the time it will take to transition to renewable energy—a crucial step in addressing climate change.

We have to “remove the effective subsidy of not pricing the damage done by carbon pollution,” Musk said. “By putting a price on carbon, we are fixing a pricing error in the market,” he said. “Any price will be better than the close to zero we have right now.”

“For developing economies they could leapfrog the fossil fuel situation with power lines, you could have remote villages with solar panels and a battery pack, just like mobile phones, a lot of countries just didn’t do the landlines, they skipped right over landlines,” said Musk.

The billionaire businessman also expressed his concern over fracking. “Fracking has elevated my concern about the carbon problem dramatically … I always thought the scarcity of oil would drive up the price … Unfortunately some smart inventors, I wish they could have invented something else … the net result is the accessible oil and gas reserves are dramatically higher, maybe by a factor of 10, and that is crazy for the climate,” he said.

Though Musk struck a note of optimism when he said, “we are going to exit the fossil fuel era. It is inevitable.” He added that it’s not a matter of if, but when, and world leaders meeting at the COP21 climate talks in Paris right now could expedite the process.