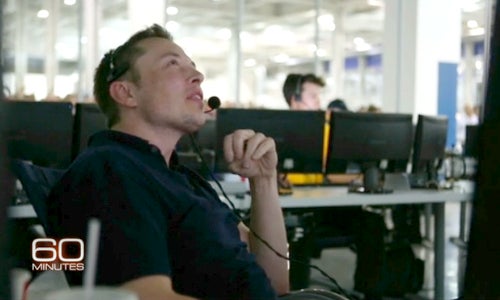 You probably haven’t seen electric vehicles (EV) get the type of primetime exposure they received Sunday evening on network television, but if Elon Musk has his way, they’ll soon become an undeniable part of our infrastructure.

Musk, the CEO of EV maker, Tesla, was the subject of a 60 Minutes feature that brought his ideology to a large-scale viewing audience that he hopes is sick of high-emissions vehicles and steep gas prices.

Though many like show correspondent Scott Pelley believe that Musk could impact cars the way Steve Jobs changed the face of computing and phone communication, Musk revealed that he initially thought the company would fail.

“If something’s important enough, you should try,” he said, “even if the probably outcome is failure.”

The piece also touched on SpaceX, Musk’s firm that stands as the only private company to ever return a spacecraft from low-Earth orbit. He’s also chairman of SolarCity, which he believes can help provide solar energy for the national network of Tesla EV chargers his company is creating.

“You can drive free, forever, on pure sunlight,” he said. “Even if there’s a zombie apocalypse and the grid breaks down, you’ll still be able to charge your car.”

The luxury EV already gets about 250 miles on a charge.

“I’m interested in things that change the world or that affect the future,” Musk said.

Earlier this year, Musk spoke to CBS about the journey from New York to Los Angeles that Tesla personnel took two Model S sedans on, using only supercharger stations. This year, Consumer Reports named the Model S best overall car of the year, which certainly counts as a victory for EVs.

How Tesla’s Massive ‘Gigafactory’ Could Lead to 500,000 EVs Per Year