For
Elon Musk, having one Gigafactory isn’t enough. If all goes to plan, he wants to build Gigafactories on several continents.

A rendering of the completed Sparks, Nevada Tesla Gigafactory which will be topped by rooftop solar panels. The massive battery plant had its grand opening on July 29.Tesla Motors

Musk gave journalists a tour inside the company’s massive Gigafactory Tuesday at it’s grand opening celebration. The unflagging Tesla CEO told
BCC he wanted a factory “in Europe, in India, in China … ultimately, wherever there is a huge amount of demand for the end product.”

The Gigafactory will manufacture lithium-ion batteries for Tesla’s electric cars and Powerwall products that store solar energy for homes and businesses.

To make its products, Tesla currently imports batteries from Japanese electronics company Panasonic. In order to meet Tesla’s
ambitious aim of producing 500,000 cars a year, it partnered with Panasonic to build the $5 billion Gigafactory in Sparks, Nevada to make the batteries locally to speed up production and slash costs. By manufacturing the battery cells onsite, Musk said Tesla will be able to innovate faster and cut out about 30 percent of the cost, according to BBC.

“Where the shipping costs start to become significant, the obvious way to combat that is to at least put a Gigafactory on the same continent,” Musk said.

.@elonmusk speaking to the media at the Tesla Gigafactory. pic.twitter.com/Rh41VqNK3y

The Associated Press reported that the Gigafactory is only 14 percent built after two years of construction. The original projected completion date for the massive project was 2020 but Musk is ramping up construction. Around 1,000 people are working seven days a week on two shifts so the factory can start producing batteries before the end of the year, The Wall Street Journal reported. 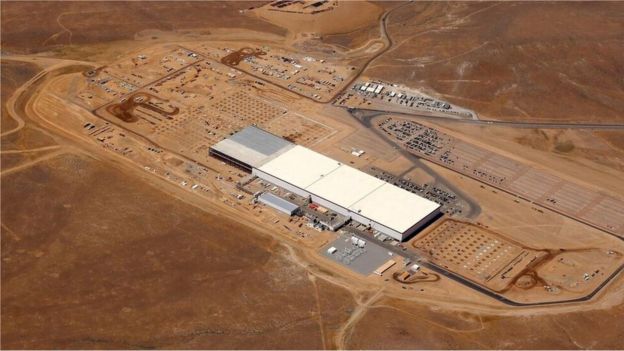 The Gigafactory in Sparks, Nevada is only 14 percent built after two years of construction.Tesla Motors

Once construction is complete, the Gigafactory will be about
three-fourths a mile long at an enormous 10 million square feet—the size of 262 NFL football fields. Musk noted that the factory could eventually employ 10,000 people in the next three to four years.

Not only will the Gigafactory be the
world’s largest building by footprint when construction finishes, it will be powered 100 percent by renewables such as solar, wind and geothermal, and will feature energy-storage technology. The company also plans for the building to achieve net zero energy.

Musk tweeted that the building will recycle old batteries—which will be highly necessary as Tesla aims to nearly double the world’s production of lithium-ion batteries.

Tesla wants the Gigafactory to be a global powerhouse. As the Associated Press described of the company’s goals:

Musk has long
advocated for a sustainable transportation future, and recently made a $2.8 billion move to acquire SolarCity to basically allow Tesla customers to drive on sunshine.

“Given that we must get off fossil fuels anyway and that virtually all scientists agree that dramatically increasing atmospheric and oceanic carbon levels is insane, the faster we achieve sustainability, the better,” Musk wrote.