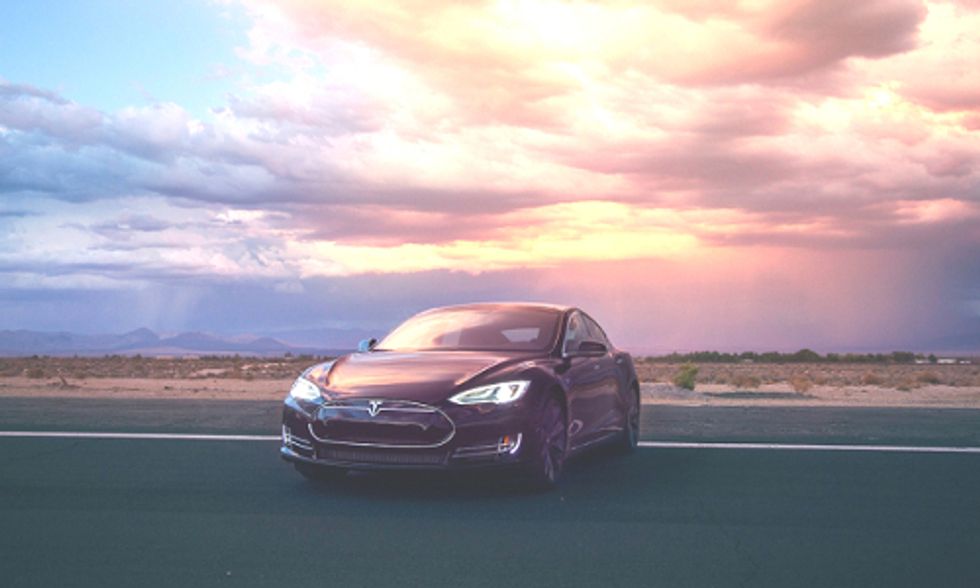 If nothing else, Tesla Motors CEO Elon Musk knows how to make headlines.

One of the most frequently cited drawbacks to electric plug-in vehicles (EV) such as the Tesla is that they don't go very far before you have to stop and charge them, at times greatly exceeding what it takes to fill a gas tank. That's been dubbed "range anxiety." Some EVs only go about 100 miles, while Tesla models average between 200 and 270 mpg. And while the number of public charging stations, including the faster Superchargers, is increasing rapidly especially in EV-dense states such as California, they're not equally easily to find everywhere.

In the middle of the desert, it would be easy for a Tesla driver to suffer from range anxiety. But Elon Musk says he's solved that problem. Photo credit: Tesla Motors

On Sunday, Musk tweeted that he had solved the problem of range anxiety and that he would unveil it on Thursday. And unveil it he did, though whether it's likely to put to rest peoples' fears of running out of a charge is uncertain.

All week EV-related media and fans buzzed with speculation that it would involve a battery redesign, better distribution of power or a more accurate warning system—or something else.

It turns out to be something else. It involved two software updates to the Tesla Model S. One is a "range assurance" application which Musk claims makes it impossible to run out of range unless you do so on purpose. This app lets you know if you're in danger of running out of range and then tells you where to find the closest supercharger. The other is the "Trip Planner," sort of a high-tech version of those old AAA maps that designed a travel route for you. This one would direct a drive to a route that would keep him within comfortable distance from a charging station at all times.

But Musk's melodramatic announcement wasn't the only big Tesla news this week. Wednesday, New Jersey Gov. Chris Christie signed a bill that would allow the company to sell its cars directly to consumers. The bill removes the prohibition on direct sales by auto manufacturers who do not have franchise agreements, allowing Tesla and other EV companies to sell directly to New Jersey consumers at up to four locations in the state. Traditional franchised showroom dealers have been fighting such measures across the country and mostly been successful. Michigan, Arizona, Texas and Maryland have banned such direct sales.

A huge victory in New Jersey for consumer choice: We are open for business! @GovChristie

"I said last year that if the Legislature changed the law, I would sign new legislation put on my desk and that is exactly what I’m doing today,” said Gov. Christie. “We’re pleased that manufacturers like Tesla will now have the opportunity to establish direct sales operations for consumers in a manner lawfully in New Jersey.”