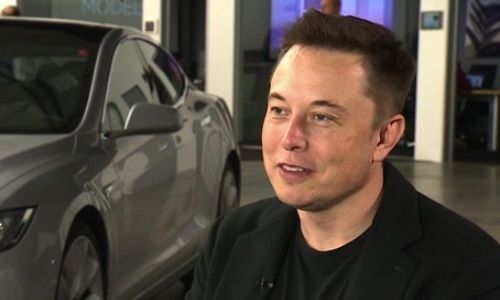 Elon Musk—who believes electric cars “are the future”—will soon have more competition in this ever-expanding sector from none other than Apple Inc.

In an interview with the BCC, Musk said that Apple’s long-rumored electric vehicle is an “open secret” and that the tech giant’s move into the nascent market is “obvious.”

Musk said that Apple has been on a hiring spree to carry out the task. “It’s pretty hard to hide something if you hire over a thousand engineers to do it,” he said.

Musk’s claims about Apple’s electric car, codenamed Project Titan, are unsurprising. In October, Musk told the German newspaper Handelsblatt that Apple has “hired people we’ve fired,” and added, “we always jokingly call Apple the ‘Tesla Graveyard.’ If you don’t make it at Tesla, you go work at Apple. I’m not kidding.”

The enigmatic visionary, who is also involved in the space exploration and the solar power industries, doesn’t seem too worried about Apple being a threat to his car company.

“It will expand the industry,” Musk told the BCC. “Tesla will still aspire to make the most compelling electric vehicles, and that would be our goal, while at the same time helping other companies to make electric cars as well.”

Besides being a leader in the electrification of cars, Tesla has also been leading the automation of cars.

Tesla’s current autopilot suite allows the driver to keep their car within the lane, maintain a safe following distance and change lanes without driver intervention.

Over the weekend, Tesla introduced its newest update that allows drivers to “summon” their car with their smartphone. The car can also open a garage door, enter the garage, park itself and shut down all without the driver being in the car.

The goal, according to a tweet from Musk, is to one day allow Tesla owners to summon their cars from across the country, such as from New York to Los Angeles.

In ~2 years, summon should work anywhere connected by land & not blocked by borders, eg you're in LA and the car is in NY

Musk predicts that everyone will own a self-driving car in the future.

“Owning a car that is not self-driving in the long term would be would be like owning a horse,” he explained to the BBC. “You would use it for sentimental reasons but not for daily use, really.”

A February 2015 report from Reuters suggested that Apple is trying to make its own version of a self-driving car, according to an auto industry source.

Apple has not made an official announcement about an electric vehicle. However, several Apple news blogs such as MacRumors and 9to5Mac noticed that the iPhone maker registered three car-related domain names—Apple.car, Apple.cars and Apple.auto—earlier this month.

The Volkswagen Hippie Bus Is Back and Now It’s Electric