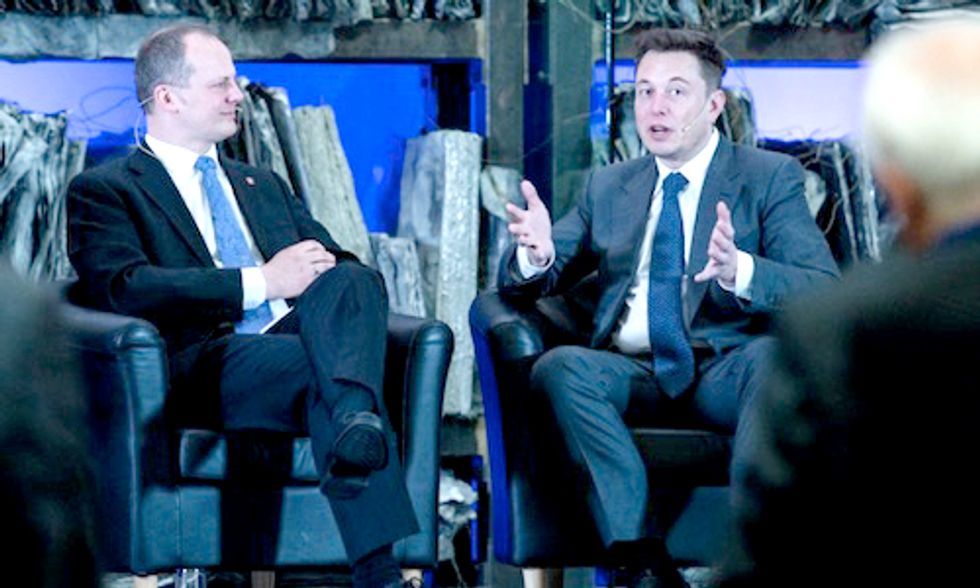 Elon Musk's grand vision to disrupt the fossil fuel economy and accelerate sustainable transportation now might include a self-driving "bus."

At a government-sponsored talk in Norway on Thursday, the Tesla CEO hinted to transport and communications minister Ketil Solvik-Olsen that his company has a secret plan to solve traffic congestion, according to Electrek.

Solvik-Olsen: Can we expect Tesla to revolutionize mass transit when it comes to buses?

Musk: We have an idea for something which is not exactly a bus, but would solve the density problem in intercity situations. I think we need to rethink the whole concept of public transport and create something that people are actually gonna like a lot more. I don’t want to talk too much about it.

When asked if he was referring to the Hyperloop system that would transport people through high-speed vacuum tubes, Musk replied no:

Musk: There’s a new type of car or vehicle that I think would be really great (to solve vehicle density in cities problem) and actually take people to their final destination and not just to the bus stop.

As Gizmodo pointed out, it sounds like Musk and Tesla could be tackling the “first mile/last mile” dilemma, a barrier that prevents people living in suburbs or smaller cities from conveniently getting to and from transit stations. This means, for example, that you have to drive your car to the train station then drive back after you return on the train. Perhaps Musk is considering an autopiloted bus that could pick up a number of passengers enroute to the train station?

The concept is similar to UberPool or LyftLine, which are shared ride options that let you and other riders who are headed towards the same destination take a single car together. This means fewer cars on the road—and, ultimately, less CO2 emissions—if more people carpool.

Electrek observed that Musk refused to answer a question about Uber last year, prompting speculation that Tesla might be working on its own ridesharing service or they might be in talks with Uber.

Just like everyone else, Elon Musk hates sitting in traffic. He once suggested building more car tunnels to help solve congestion.

"We are now almost at 400,000 orders for the model 3," he said at his talk in Norway, adding that interest in the model "surprised even us."