Elon Musk: Convince 10 People to Buy a Tesla and You Might Get the Car for Free 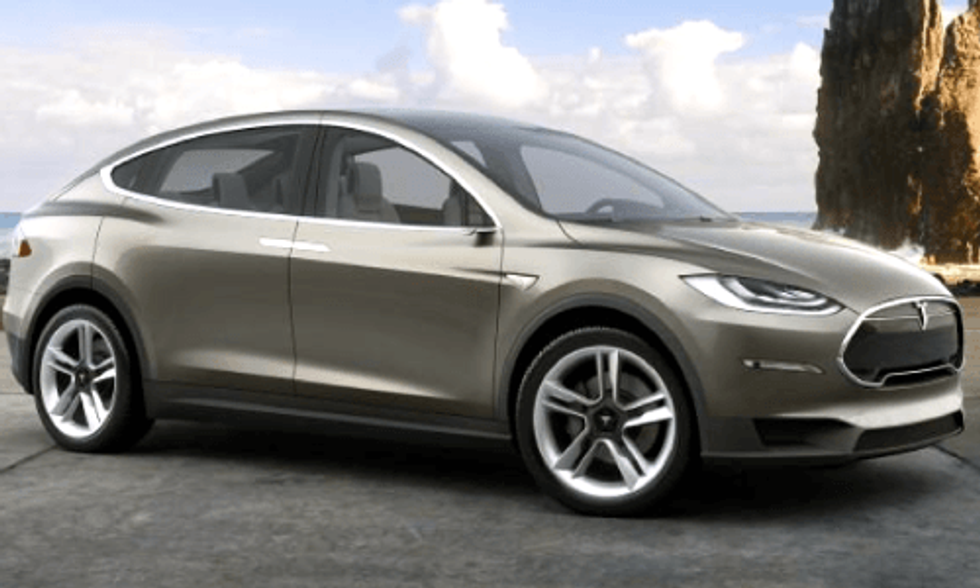 Want to save money on your next Tesla purchase, like the forthcoming Model X pictured above? Convince a friend (or 10 better yet) to buy one. Photo credit: Tesla Motors

In an email he sent to current Tesla owners, Musk described an experimental referral program designed to boost sales of the luxury electric car through Oct. 31. Tesla will give owners $1,000 for every person they convince to buy a new Model S. The new owner will also get a $1,000 discount.

And "just for fun," Musk added, if an owner can convince five people to purchase the car, they and a guest will be invited to tour their massive Gigafactory in Nevada and attend the grand opening party. Convince 10 people to buy a Tesla, then that person (who apparently runs with a wealthy group of friends) earns the right to join a very exclusive club—the opportunity to purchase the company's SUV, the Founder Series Model X, with all the options for free plus the $10,000 referral credit. The forthcoming car is estimated at $50-60,000. To up the ante, the first person to reach ten referrals wins the entire car for free.

Wonder if LinkedIn CEO Jeff Weiner (who probably can afford a few Teslas already) is trying to recruit a few new drivers ...

RT @jeffweiner More evidence of how disruptive Tesla is: Just upgraded my car by clicking a few buttons. Was easier than upgrading my phone.

What's the reason behind the new sales scheme? Musk said that stores are quite expensive to set up and operate, and costs about $2,000 to sell a car through a store. And in a conference call with reporters, Musk also pointed out that the reason his company devised this referral program was to get around the car maker's difficulty in setting up stores in states that have banned Tesla from direct sales.

As I wrote previously, Tesla prefers to sell its vehicles by cutting out the middleman of franchised car dealerships. For people interested in buying a Tesla, you can buy it online or from a company-owned store from states that allow direct sales. However, many states have blocked Tesla’s direct sales approach, saying they prefer to distribute cars to consumers the conventional way in an effort to protect small businesses.

Turning Tesla's network of drivers into recruiters seems like a good way to get around those pesky state bans.

“This is a way for us to have a guerrilla battle with some of the car dealer associations,” Musk said. "Tesla reps are not allowed to sell in certain states—we are held back by some legislation."

"We don’t know if this will have a meaningful impact on the cost of sales," Musk also said. "If not it will be an interesting experiment and we’ll leave it there."

Here's the email that Musk sent to customers:

Word of mouth has always been a major part of how Tesla sales have grown. When I meet Tesla owners, one of the first things they often tell me is how they have convinced many others to buy the car.

As you may already know, Tesla does not advertise or pay for endorsements or product placement. Maybe by doing so we could sell more cars, but I don't like the idea of trying to trick people into buying a product by false association. If you see somebody famous driving a Model S, it is because they genuinely like the car. If you see it in a movie or TV show, it is because the people associated with that production genuinely like the car.

Besides word of mouth, another way that our cars are sold is through stores. These will always be important to allow people to check out new models and ask our product specialists detailed questions. However, stores are quite expensive to set up and operate. In reviewing the Tesla cost of sales, we found that it is approximately $2,000 to sell a car through our stores, higher in some regions and lower in others.

Both ways of reaching potential customers are important, but, if we can amplify word of mouth, then we don't need to open as many new stores in the future. So, we are going to try an experiment. This is similar to the customer growth program that I worked on at PayPal/X.com back in '99. What worked for PayPal may not work for Tesla, but it is worth trying, as the net result would be lowering our costs by $2,000, allowing us to give that money to our customers.

From now through October 31st, if someone buys a new Model S through your link (XX include link XX), they will get $1,000 off the purchase price and you will get a $1,000 credit in your Tesla account, which can be applied to a future car purchase, service charge or accessories. To put some limits on the experiment, each Tesla owner can grant a maximum of ten $1,000 discounts.

Just for fun, there will also be some things that money can't buy. If five of your friends order a Model S, you and a guest will receive an invitation to tour the Gigafactory in Nevada - the world's biggest factory by footprint—and attend the grand opening party. This will be awesome. At ten orders, you get the right to purchase a Founder Series Model X, which is not available to the public, with all options free (value of about $25,000). The first person to reach ten will get the entire car for free.