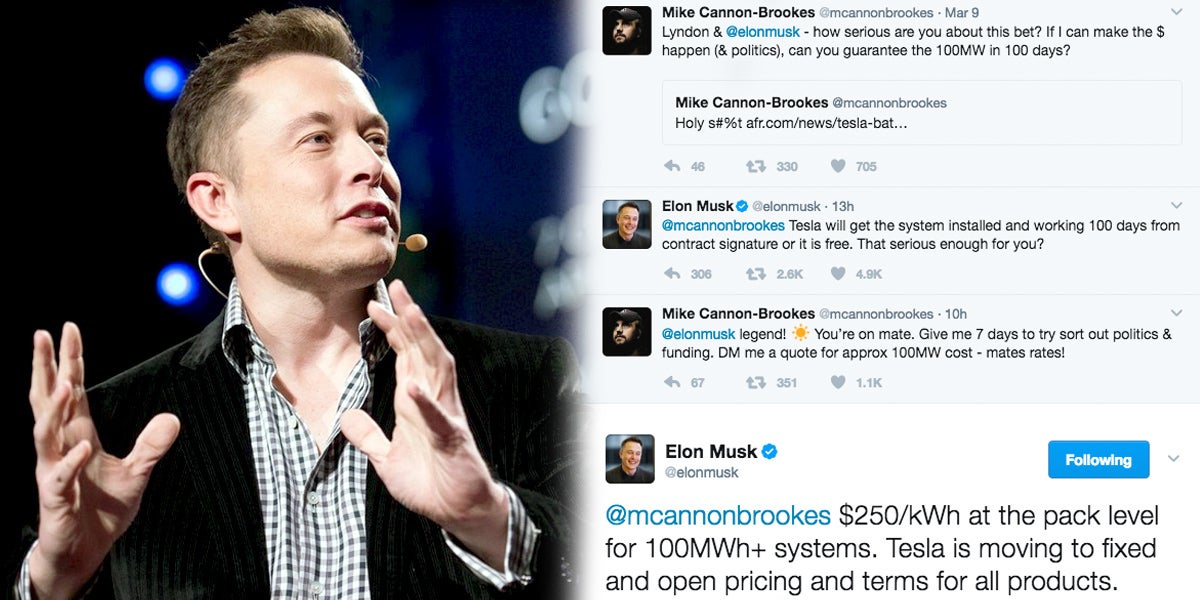 Tesla boss and
prolific tweeter Elon Musk has made an audacious bet to solve South Australia’s energy woes by building a 100-megawatt battery storage farm. If the system is not operational in 100 days, the AUD$33 million (USD$25 million) technology will be provided for free.

It all started on Thursday when Atlassian CEO and Australian billionaire Mike Cannon-Brookes tweeted an article to Musk that cited a similar offer from Lyndon Rive, who heads Tesla’s battery division.

Rive said he would “commit” to installing the 100-300 megawatt hours of batteries to help stop South Australia’s recent string of blackouts.

“We don’t have 300MWh sitting there ready to go but I’ll make sure there are,” he said.

Cannon-Brookes then tweeted to Musk asking him if he could really make this happen if the funds were available and the politics were sorted out. Incredibly, Musk didn’t just cement the offer, he wagered that Tesla could do it in less than 100 days or else the whole installation would be given free of charge.

“That serious enough for you?” Musk added.

Tesla will get the system installed and working 100 days from contract signature or it is free. That serious enough for you?

In response, Cannon-Brookes called Musk a “legend” and asked for seven days to “sort out politics and funding.” He also asked for a price quote via private message.

Musk replied with an actual figure—$250 per kilowatt-hour for 100MWh systems—noting that Tesla is being more transparent about the prices of its products.

$250/kWh at the pack level for 100MWh+ systems. Tesla is moving to fixed and open pricing and terms for all products.

Like with many of Tesla/SpaceX CEO’s seemingly far-fetched promises, there’s a good chance the proposed South Australia battery farm could actually spark to life and under deadline.

That’s because, if you recall, Tesla built a similar plant in Ontario, California in just 90 days.

That facility, described as the largest operating lithium ion project in the world, consists of 396 stacks of Tesla Powerpack units spread across 1.5 acres. The batteries can store up to 80 megawatt hours, or enough energy to power 15,000 homes for four hours.

Batteries have been touted as a way to solve renewable energy’s intermittency problem. Batteries, like the ones Tesla is churning out from its massive Nevada Gigafactory, are designed to “enable so-called ‘load-shifting’ by charging during times when electricity prices are lower due to less demand, and discharging when demand and prices are high,” as Bloomberg described. Tesla’s cells can also store solar power generated during daytime and release it at night, and serve as backup during outages.

South Australia has suffered a slew of power outages in the last six months, including a February blackout during a 104-degree heatwave.

As The Verge explains, there are many reasons, including political ones, behind the blackouts. But Tesla’s latest offer doesn’t just help solve blackouts, it could help the country transition to a more sustainable energy future:

“The Australian Energy Market Operator has blamed the blackouts on a number of factors, including higher-than-expected demand, but the topic has become a political battleground, with the Australian government pointing to the failure of renewable energies to cover usage.

“Coal-fired power plants have been closing across Australia in recent months, hiking energy bills and contributing to blackouts like those suffered in South Australia. Prime Minister Malcolm Turnbull has pushed for a return to the fossil fuel as part of a ‘coal-fired future,’ but Tesla’s battery technology may help wind, solar, and other renewable energy sources persist in Australia. Musk’s battery farms can store huge amounts of energy generated by these renewable sources and siphon it off during busy times, theoretically eliminating blackouts.”

According to The Advertiser, Premier Jay Weatherill confirmed on Friday that he had reached out to the pair. Discussions with Tesla and Atlassian are reportedly planned for next week.