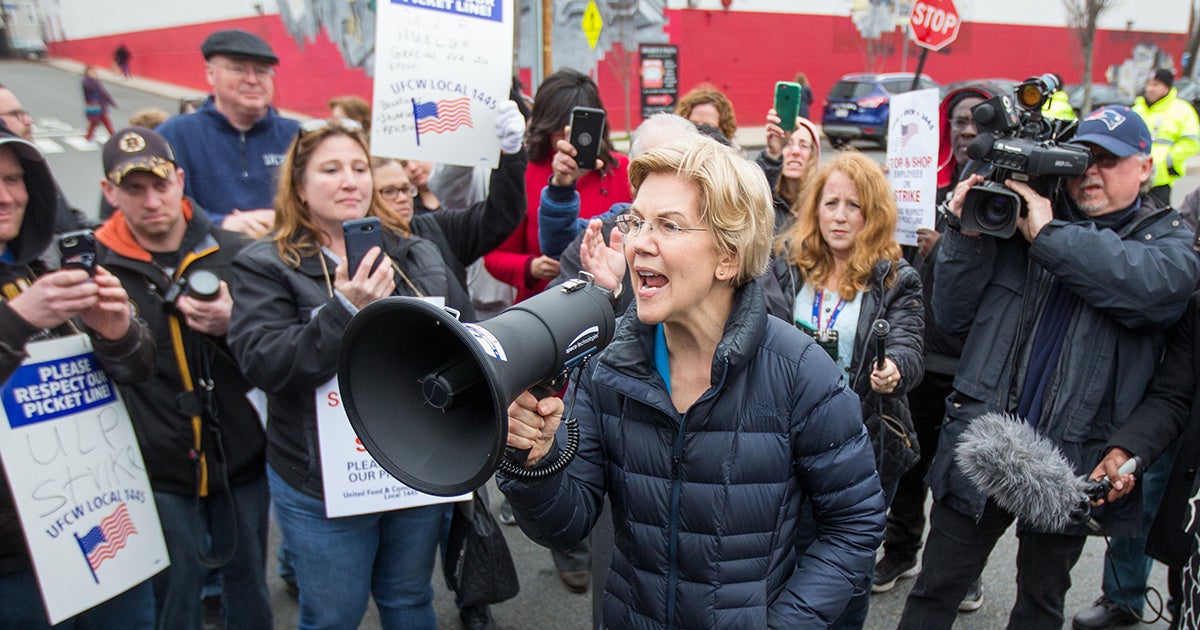 Environmental activists and advocacy groups praised Sen. Elizabeth Warren Monday after she promised that if she is elected president in 2020, she will ban new fossil fuel extraction leases for federally controlled lands and waters.

“It is wrong to prioritize corporate profits over the health and safety of our local communities,” the Massachusetts Democrat wrote on Medium. “That’s why on my first day as president, I will sign an executive order that says no more drilling — a total moratorium on all new fossil fuel leases, including for drilling offshore and on public lands.”

This is a really important stand to take. thank you @SenWarren https://t.co/YdNgSW1Wld

“This is a big deal,” said author and activist Naomi Klein. “We can’t only talk about the things we want to add — millions of new jobs in renewables, efficiency, transit, green public housing. All that’s great. But we gotta be willing to be honest about what we have to subtract too.”

This is a big deal. We can't only talk about the things we want to add — millions of new jobs in renewables, efficiency, transit, green public housing. All that's great. But we gotta be willing to be honest about what we have to subtract too. https://t.co/1raaErdEFn

Celebrating Warren’s “bold plan” on Twitter Monday, both 350 Action and Greenpeace USA noted the pressure it puts on other candidates in the crowded Democratic field.

“Americans want our next president to be a real climate leader, and candidates are listening,” tweeted 350 Action. “Who’s next?”

Wow: @ewarren has a bold plan to #KeepItInTheGround. "On my 1st day as president, I'll sign an order that says no more drilling." 👏

Americans want our next president to be a real climate leader, and candidates are listening. Who's next? #ClimateTest2020 https://t.co/zK3VQIvLqj pic.twitter.com/DBXNNr2LIz

A cosponsor of the Green New Deal resolution currently before Congress, Warren was one of only three 2020 Democratic candidates — along with Sens. Bernie Sanders (I-Vt.) and Kirsten Gillibrand (D-N.Y.) — who received checkmarks across the board on 350 Action’s 2020 climate policy scorecard, released in late March.

Warren’s approach to managing public lands comes in stark contrast to that of the Trump administration, which has gutted environmental protection rules and worked to expand fossil fuel extraction offshore and on public lands. The senator was among those who opposed the recent confirmation of David Bernhardt, a former fossil fuel lobbyist, to head Trump’s Interior Department.

The Trump administration currently poses a grave threat to public lands and waters “with its casual denial of science and apparent amnesia about massive crises like the BP oil spill,” Warren argued in her Medium post — but “it doesn’t have to be this way. We must not allow corporations to pillage our public lands and leave taxpayers to clean up the mess.”

America’s public lands provide us with clean air and water, sustain fish and wildlife, and offer a place for millions to experience the beauty of nature. Right now, they're under attack. Read my new plan to protect them while fighting climate change: https://t.co/BBaeOc7kMN

While Warren’s vow to impose a moratorium on drilling leases was highly praised, that wasn’t the only promise she made Monday.

“The National Park Service is funded by taxpayers,” she added, “and it’s long past time to make entry into our parks free to ensure that visiting our nation’s treasures is within reach for every American family.”

Acknowledging that “a patchwork of ownership and access rights means that as many as 10 million acres in the West are not accessible to hunters, anglers, and other outdoor enthusiasts,” she also committed to “unlocking 50 percent of these inaccessible acres, to grow our outdoor economy, help ease the burden on our most popular lands, and to provide a financial boost across rural America.”

Though Warren’s policy is national in nature, she also emphasized the importance of the Interior Department “meaningfully” incorporating local stakeholders, including tribal groups, in public lands management.

“America’s public lands belong to all of us,” she concluded. “We should start acting like it — expanding access, ending fossil fuel extraction, leveraging them as part of the climate solution, and preserving and improving them for our children and grandchildren. Together, we can manage and protect our public lands for generations to come.”