‘No Place Is Safe From Poaching’: 25,000+ Elephants Killed in Key African Reserve New research shows that more than 25,000 forest elephants were killed for their ivory in Gabon’s Minkébé National Park, one of the largest and most important wildlife preserves in Central Africa, between 2004 and 2014.

That’s a decline of somewhere between 78 and 81 percent in the park’s forest elephant (Loxodonta cyclotis) population over the span of just one decade, and it was largely driven by poachers who crossed the border into Gabon from its neighbor to the north, Cameroon, according to a the study led by researchers with Duke University and published in the journal Current Biology in February.

“With nearly half of Central Africa’s estimated 100,000 forest elephants thought to live in Gabon, the loss of 25,000 elephants from this key sanctuary is a considerable setback for the preservation of the species,” John Poulsen, assistant professor of tropical ecology at Duke’s Nicholas School of the Environment and the lead author of the study, said. 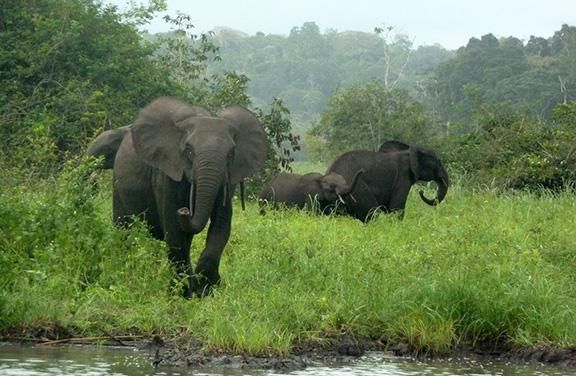 This is a small group of forest elephants in Gabon’s Minkébé National Park. Poaching for the illegal ivory trade has reduced their numbers by 80 percent, according to a new study.John Poulsen, Duke University

Thanks to booming consumer demand, particularly in Asia, wildlife trafficking operations are so militarized today that poachers are frequently armed with enough weaponry and other equipment to outgun local park rangers. The most dangerous poachers in Africa are often employed by professional wildlife trafficking rings and have access to resources well beyond what was available to poachers during earlier crises, from financial support to military-grade equipment such as armored vehicles, helicopters, and machine guns.

Poulsen and his colleagues arrived at their estimate of forest elephant population losses in Minkébé National Park by comparing the results of two large-scale elephant dung surveys. The researchers identified two distinct “fronts” of poaching pressure after analyzing the surveys’ data on abundance and distribution of elephant dung in the park.

“Elephant numbers in the south of the park, which is 58 kilometers from the nearest major Gabonese road, have been somewhat reduced,” Poulsen said. “By comparison, the central and northern parts of the park—which, at one point, are just 6.1 kilometers from Cameroon’s national road—have been emptied.”

The fact that Cameroon’s national road is so close to the park makes it relatively easy for poachers to slip into the park, make their illegal kills, and then transport elephant tusks back to Cameroon’s largest city, Douala, which has become a major hub of the international ivory trade. 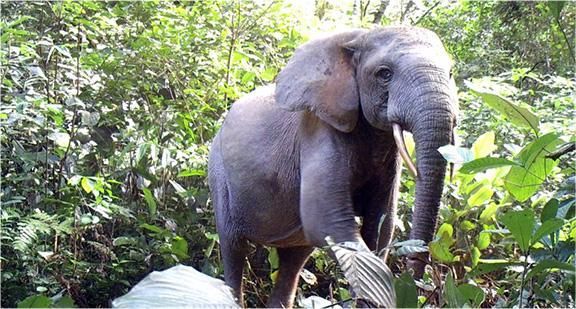 This is a lone forest elephant in Gabon’s Minkébé National Park. From 2004 to 2014, an estimated 25,000 elephants in the park were killed for the illegal ivory trade.John Poulsen, Duke University

Poached ivory makes its way into the illegal market very quickly. A September 2016 study found that as much as 90 percent of the elephant tusks seized in Africa comes from elephants killed within the past three years, as opposed to the illegal trade being fueled by older ivory leaking into the market, as was previously believed to be the case.

Poulsen notes that the Gabonese government has made several major moves intended to rein in poaching in Minkébé National Park, such as elevating forest elephants’ to “fully protected” status, creating a National Park Police force, doubling the national park agency’s budget, and burning all of the ivory it has seized from illegal traders (becoming the first African nation to do so).

While these initiatives are commendable and may have helped reduce poaching activities that originate from within Gabon, according to Poulsen, he says that his team’s research demonstrates that the illegal cross-border trafficking of poached ivory has not been curbed and that new approaches to protecting elephants may be called for.

“To save Central Africa’s forest elephants, we need to create new multinational protected areas and coordinate international law enforcement to ensure the prosecution of foreign nationals who commit or encourage wildlife crimes in other countries,” Poulsen added.

“Studies showing sharp declines in forest elephant populations are nothing new, but a 78 to 81 percent loss in a single decade from one of the largest, most remote protected areas in Central Africa is a startling warning that no place is safe from poaching.”