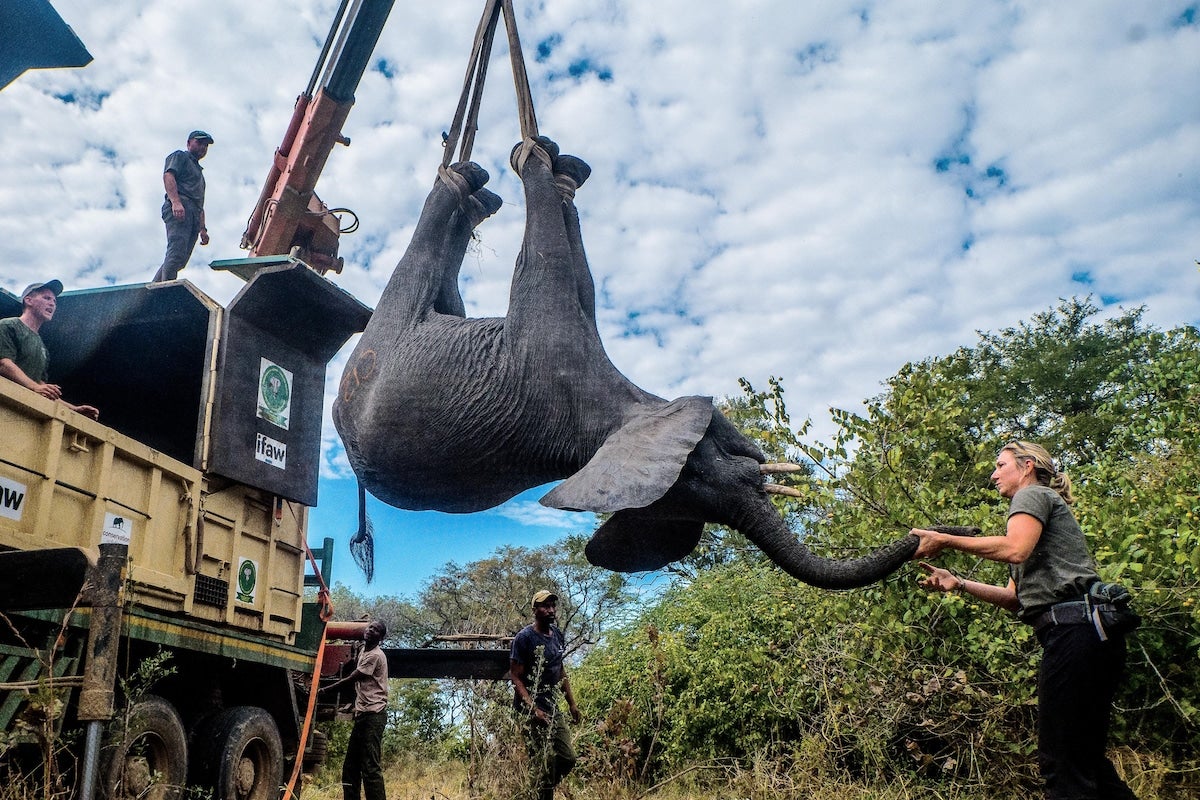 Wildlife conservation officers load a tranquilized elephant into a truck at Liwonde National Park in Machinga, Malawi, to be relocated at Kasungu National Park, on July 10, 2022. Joseph Mizere / Xinhua via Getty Images

In Malawi, 250 elephants are being moved one at a time from the overcrowded Liwonde National Park to the Kasungu National Park, located about 380 kilometers (236 miles) north. At least 40 elephants have already been relocated.

To move the elephants, experts must first sedate them with darts, then hoist them onto trucks that transport them to Kasungu National Park. All elephants are expected to be relocated by the end of July.

Relocation costs for the elephants are expected to reach up to $2 million. An additional 405 or so other animals of various species are also going to be moved to the larger park. Other animals being relocated include buffalo, impala, sable, warthog and waterbuck, HuffPost reported.

“This will establish viable elephant populations, and ensure the prosperity of local communities living around the parks. It will also alleviate habitat pressure and reduce human-wildlife conflict,” said Sam Kamoto, African Parks representative in Malawi.

The relocation process is a collaborative effort by experts from Malawi’s Department of National Parks and Wildlife, the International Fund for Animal Welfare and African Parks.

In Liwonde National Park, which has become overcrowded, more than 600 elephants have taken over the area, and experts say they were threatening the biodiversity of the park. The elephants, which were breeding at a rate of 10 percent each year, threatened park vegetation and resources for the other animals that live there. Liwonde National Park is home to several different animals, including more than 400 species of birds alone.

Kasungu National Park is about four times bigger than Liwonde National Park, but it’s lacking in wildlife. Poaching reduced a formerly abundant elephant population to only 49 individuals in 2015. Conservationists have helped bring the count back up to 120, and the additional 250 elephants will be better supported in the new park, according to officials.

“The translocation of the elephants and other wildlife is a significant achievement and proves the national parks’ approach to working with partners to secure its natural resources is a sound one,” said Patricio Ndadzela, a representative for the International Fund for Animal Welfare.

To deter human-wildlife conflict, park officials have constructed a fence along the eastern border of Kasungu National Park to keep elephants and other wildlife from walking onto farmland or into communities nearby.

In addition to giving the elephants more room to roam and alleviate resource pressure from other wildlife in the smaller park, the relocation is expected to also increase tourism and direct more money into the local economy, according to Ndadzela.

Coyotes Are Here to Stay in North American Cities – Here’s How to Appreciate Them From a Distance
By David Drake, Bret Shaw, and Mary Magnuson
By The Conversation
Wildfires 101: Everything You Need to Know
Wildfires, also commonly called forest fires or bushfires, are unplanned
By Paige Bennett
Most Rainwater on Earth Contains PFAS Exceeding Safe Levels, Study Finds
New research from Stockholm University shows that PFAS in rainwater
By Paige Bennett