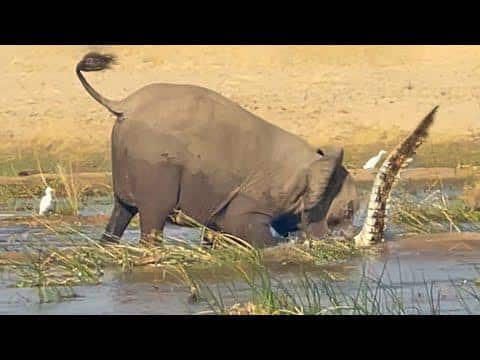 Elephants are known as the gentle giants of the animal kingdom, but even they can get aggressive when their children are threatened.

This is what one crocodile learned in a rare video posted Tuesday by the safari footage app Latest Sightings.

“This unlucky crocodile found itself right underneath the feet of the world’s largest land mammal – the African Elephant, and, unfortunately, did not make it to see another day,” Latest Sightings wrote in a description of the encounter.

The video, shot in Zambia, shows the mother elephant approach the crocodile and begin to push it with her mouth and head before trampling it. She also wraps her trunk around the reptile and tosses it at one point. Because she had no tusks, the entire attack was carried out using her trunk, head, mouth and feet. It was enough to kill the crocodile, however. Latest Sightings estimated that the elephant weighed between 2,700 and 3,600 kilograms (approximately 5,952 and 7,937 pounds), more weight than the crocodile could withstand.

Latest Sightings founder Nadav Ossendryver told HuffPost that he had never seen anything like the attack in 10 years of posting wildlife footage.

Videographer Hans Henrik Haahr, who shot the footage, described it with one word: “shocking.”

However, the mother elephant’s behavior was not without cause, according to Latest Sightings:

Crocodiles are opportunistic hunters and have been known to prey on baby elephants. This mother elephant was not taking any chances and was not happy with the crocodile being so close to her young calf –to protect her calf, she removed the threat of the crocodile entirely.

You can even see the elephant is lactating.

While elephants rarely attack crocodiles, mother elephants will aggressively defend their young, and male elephants can also be aggressive during mush. Latest Sightings has shared videos of an elephant stabbing and killing a buffalo with his tusks, an elephant driving a rhino and her baby from a watering hole, and an elephant flipping a hippo in the air.

While this event was unusual, it is not the first time an elephant has been documented killing a crocodile in the wild. However, another encounter reported in 2019 did not turn out so well for the elephant.

A photo taken in Zambia’s South Luangwa National Park showed a dead elephant lying on top of a dead crocodile, as Live Science reported at the time. When crocodiles attack elephants, they usually bite down on their trunks.

“A healthy adult (sometimes with the assistance of the herd) can usually fight off the crocodile, though it may sustain severe injuries to the trunk,” University of Bristol crocodile researcher Agata Staniewicz told Live Science in an email. “However, an injured or sick elephant might not have been strong enough to fight.”

A safari representative thought the elephant probably collapsed due to its injuries and landed on top of the crocodile, taking its predator out as well.