When Are Electricity Rates the Lowest? [2022 Guide]

In this article, we’ll answer your questions about low electricity rate hours, including:

Many utility companies offer time-of-use (TOU) energy plans, which means the rate you’re charged for electricity varies based on when you use it. TOU rate structures have pre-set peak, off-peak, and sometimes mid-peak times that dictate how much you’re charged for energy. Electricity use during peak hours will cost more than during mid-peak, and off-peak usage is the most affordable. Time-of-use rates can also vary based on the time of year, which relate primarily to summer cooling and winter heating.

Below, we’ll discuss how to find out when your off-peak hours are, some additional factors that affect your electricity rates, and how to save money on your electric bills if you’re set up with a time-of-use energy plan.

Jump To: When Is Electricity Cheapest? | Factors that Influence Your Energy Cost | When Are Off-Peak Hours for Electricity? | How To Save Money With Time-of-Use Energy Plans

When Is Electricity Cheapest?

If you have a time-of-use (TOU) electricity plan, energy will be the cheapest during off-peak hours. There is no universal off-peak and peak schedule set by state Public Utilities Commissions (PUCs), so the specific hours will vary based on your energy provider.

In some cases, peak hours are in the middle of the day, and sometimes there are two peaks — in the morning and the evening. Off-peak hours begin later at night and go through until the early morning. Companies that also have mid-peak hours typically charge moderate rates in the early morning and late afternoon or early evening between peak and off-peak hours. Weekdays typically use peak pricing, and weekends have off-peak rates.

There are many other things that can affect your energy rates on a TOU plan, and it’s easiest to remember that the cost per kWh goes up when more homeowners are pulling energy from the grid. Most electricity usage occurs during the daytime, in the summer and in the dead of winter to cool and heat homes and in more populated locations.

Factors That Influence Your Energy Cost

Aside from the time of day, there are many other factors that can affect the price you’ll pay per kilowatt-hour (kWh). We’ll discuss these other factors in greater detail below.

One of the most significant factors that can influence the price you pay for electricity is your energy plan. In states where the energy market has been deregulated, you have an energy choice, meaning you can choose different electric suppliers and various energy plans. Even in states that aren’t deregulated, you might have your choice of energy plans from your supplier. The different types of plans can dictate how much you’ll pay for energy at any given time.

Under a fixed-rate energy plan, for example, you’ll pay a set rate per kWh that won’t change no matter what. Variable-rate plans have per-kWh rates that change based on local electricity prices and demand, which means they can rise during peak hours and drop during off-peak hours.

Energy plans all have individually set electricity rates as well, so one plan might be several cents cheaper per kWh than another.

If you’re on a TOU energy plan or a variable-rate plan, the time of day can affect what you pay per kWh. Remember, energy rates fluctuate based on demand, so it follows that your rates will be higher when more people are using electricity. Most homeowners use energy during the day when peak hours are in effect, so you’ll typically see higher rates from the early morning through the early evening — sometimes with a mid-afternoon drop-off.

Night-time electricity usage is significantly lower overall, so using energy after 7 p.m. — or whenever your electric company’s off-peak hours begin — will help you save on energy.

The time of year can also affect energy rates, primarily because there is higher demand in certain months. For example, some utility providers adjust their per-kWh rate to keep up with spikes in demand during the summer when energy use is higher to run air conditioners. Many companies will have a higher summer rate from June through September, although the specific months can vary based on your location.

Most electric companies also consider holidays to be off-peak, although it’s often challenging and not particularly helpful to schedule energy usage for holidays.

Variable-rate energy plans have per-kWh rates that change based on the local price of electricity. Energy prices can increase when demand is high or when the energy supply is low. These plans can often see spikes in energy rates during times of crisis or when the energy reserves cannot be refilled at the same rate they are being depleted. Your supplier will track local market prices and charge you accordingly.

Many utility companies still use fossil fuels like natural gas and coal to produce power, but some energy producers use renewable energy sources to generate power. Some examples of these clean energy sources include solar power, wind power, hydropower and biomass.

The source of your energy can affect what you pay for electricity. While renewable plans are far better for the environment and reduce global warming and pollution, they tend to be a bit more expensive on average on a per-kWh basis — usually only one to two cents higher. However, many states have lofty Renewable Portfolio Standard (RPS) goals that are likely to promote clean energy even more in the future, so prices of green energy plans could come down.

The populations in cities near your home can also affect the local demand for energy, which could create fluctuations in price. For example, energy is often more expensive in big cities than it is in suburban or rural areas. More individuals pulling power means a higher demand and strain on the grid, which can lead to higher prices.

Energy prices can be high in areas where energy is challenging to deliver to customers. If you live close to a power plant, the cost to get electricity to your home is much lower than delivering that same power many miles away.

Lastly, prices are higher in areas where energy cannot be purchased from other states. In states like Alaska and Hawaii, there is no opportunity to purchase electricity from surrounding states, so the per-kWh prices in these states are some of the highest in the country.

When Are Off-Peak Hours for Electricity?

Off-peak hours for electricity tend to be at night when the demand for energy is lowest. The specific hours that constitute off-peak usage vary by location, by energy supplier and by the time of year.

In most cases, off-peak hours will begin in the evening, between 7 p.m. and midnight. They will extend through the night and end in the morning, often between 8 a.m. and 10 a.m. If your electric company has mid-peak hours, they fall between on-peak and off-peak and usually last for an hour or two on either end of the off-peak hours.

You can ask your energy supplier about off-peak hours to get the exact schedule that applies to you.

How To Save Money With Time-of-Use Energy Plans

There are quite a few ways to save money on electricity with time-of-use plans, and most of them involve scheduling your energy usage for off-peak time periods when possible. We’ll discuss some specific strategies below.

Use Energy at Night When Possible 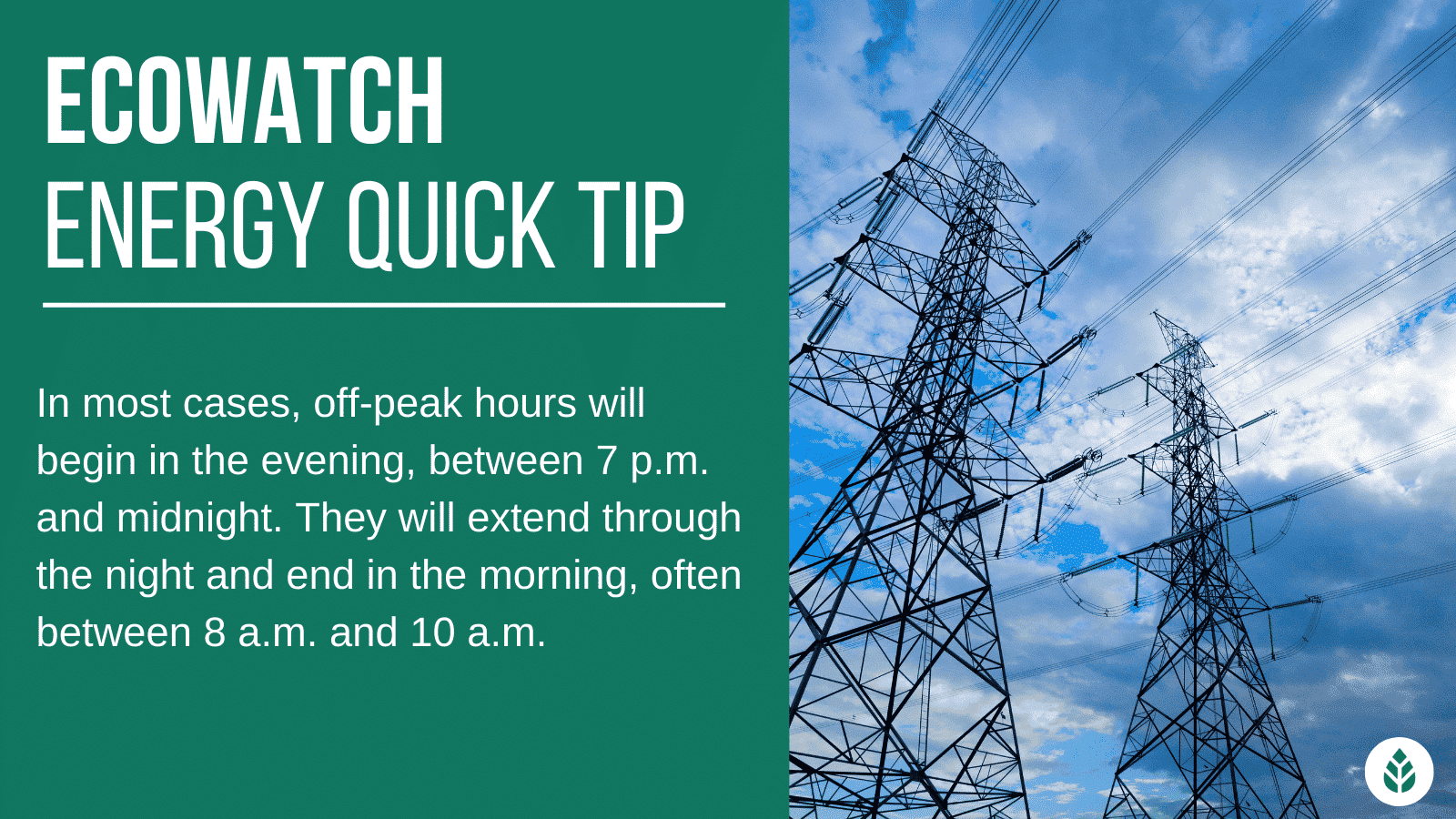 Of course, one of the easiest ways to pay less for energy on a TOU plan is to use energy at night during off-peak hours when you can. Avoiding all energy usage until off-peak hours begin is unrealistic, but simple things like waiting to run the dishwasher or washing machine until the off-peak hours kick in can go a long way in saving you money.

Get a Smart Thermostat

In the summer, you can lower or turn off your air conditioning while no one is home to reduce energy usage, and then schedule it to kick back on a half-hour before you get home. You can do the same thing in the winter with heat, although it’s important never to turn down the heat too much, as you risk freezing pipes and damaging sheetrock and other building materials from the temperature swing.

Finally, if you have an electric vehicle, wait for off-peak hours to charge it. Charging overnight or on the weekends when electricity costs are lower can save you a ton of money per charge, which can add up to substantial savings throughout the year. 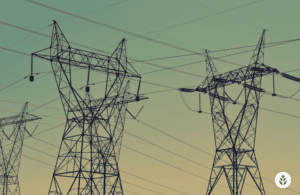 What Is Electricity Deregulation? Are Solar Panels Worth It? Top States for Solar Complete Guide to No-Deposit Electricity Plans