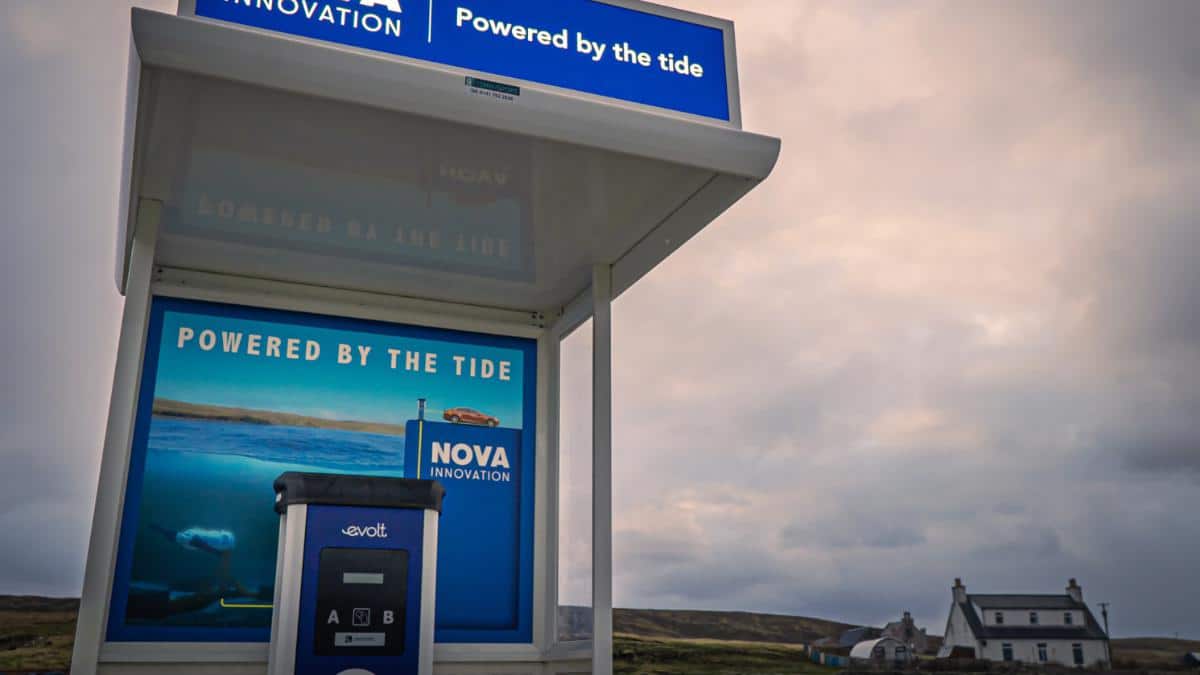 The future of electric vehicle charging is already in Scotland, and it’s helping push the country toward net-zero carbon emissions.

Cars on the island of Yell, located in the Shetland Islands in Scotland’s northernmost region, can now be fueled entirely by tidal energy from Nova Innovation‘s tidal turbines. Tidal turbines are large, revolving machines anchored to the seafloor. Besides fueling electric vehicles, the company explained that Nova Innovation‘s tidal turbines don’t visually impact the landscape or pose a navigation hazard. They also offer long-term and accurate predictability when it comes to powering Shetland’s grid.

The company tidal array has been powering local homes and businesses on Yell for more than five years, a company spokesperson told EcoWatch. Now, that same technology feeds into an electric vehicle charge point on the island fueled entirely by the sea.

Nova Innovation’s CEO Simon Forrest said, “We now have the reality of tidal powered cars, which demonstrates the huge steps forward we are making in tackling the climate emergency and achieving net-zero by working in harmony with our natural environment.”

The new technology is a first for the UK, and can be deployed around the world, Forrest said in a statement emailed to EcoWatch. Several different tidal energy technologies in Scotland work to capitalize on the country’s many islands and tidal currents. The goal is to reduce reliance on traditional combustion engine vehicles, which are responsible for around one-fifth of all carbon emissions in the UK, Maritime Journal reported.

Fiona Nicholson, a local electric car driver and fan of Nova Innovation’s technology, said, “[I]t is exciting to have this on my doorstep… Most people in Shetland live close to the sea — to be able to harness the power of the tide in this way is a great way to use this resource.”

Nicholson has been following Nova Innovation since it built its test model, and believes there will be continued interest in the technology and how different businesses could potentially use it, the company statement said.

Scotland has been a global leader in renewable energy sourcing for years, particularly tidal energy innovations. In 2013, the country set a goal of being 100 percent renewable by 2020. In 2018, the country’s record-breaking wind power output was enough to power five million homes; by 2019, wind power produced enough to power two Scotlands. In 2016, the world’s largest tidal energy farm launched in Scotland, and in 2020, the country boasted the world’s largest tidal array of underwater turbines.

By the start of 2020, the country was on track to meet its ambitious goal. As of November, Scotland had surpassed 90 percent renewables, BBC reported. More recent calculations could show that Scotland has met its target.

In its push toward net-zero, the Scottish government also banned selling new cars powered solely by gas or diesel by 2032, spurring the domestic need to develop new sources of clean energy to power vehicles, Maritime Journal reported. The government backed many of these innovations, including Nova’s project, as part of its clean energy transition and fight against the climate crisis.

Michael Matheson, Cabinet Secretary for Transport, Infrastructure and Connectivity, said, “It’s fantastic to see that Nova Innovation is demonstrating yet again that Scotland remains at the forefront of developments in zero-emission transport solutions… This type of innovation is key in responding to the global climate emergency and highlights the opportunities that can be realized here in Scotland as we transition to a net-zero economy.”