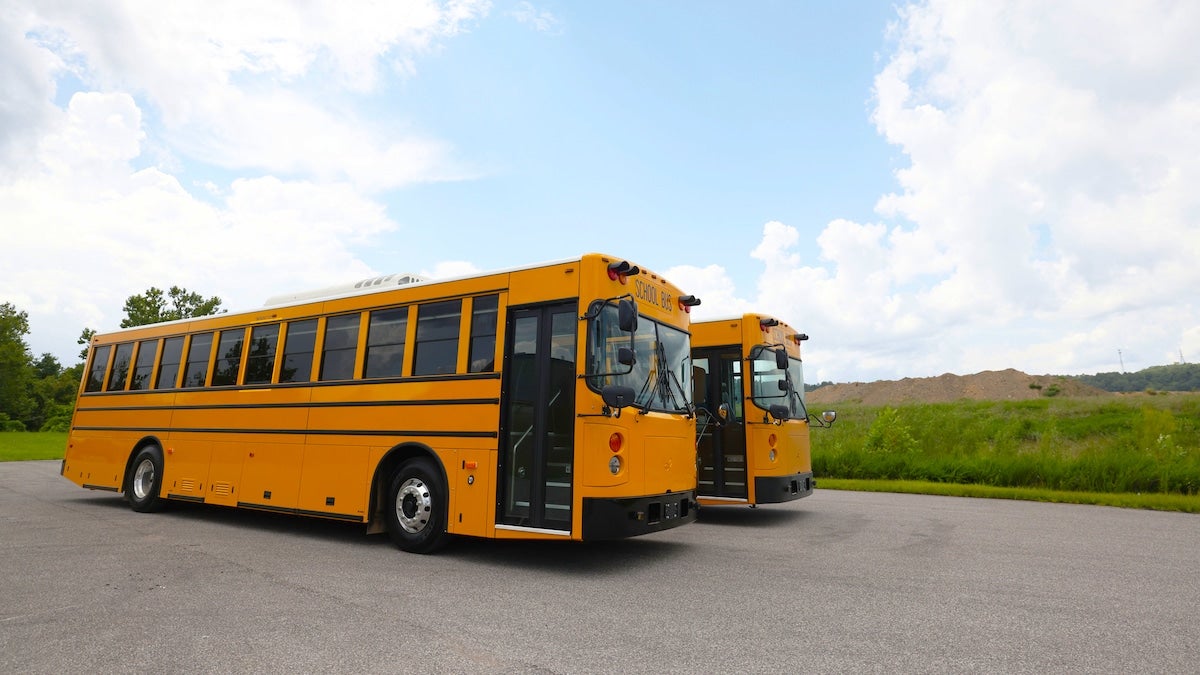 Stepping onto a yellow school bus for the first time is one of the most iconic rights-of-passage in a U.S. childhood. But it turns out these buses aren’t as wholesome as their bright color and rounded roofs suggest.

In fact, most school buses run on diesel and, when children stand in their shadow, they are likely breathing in the most polluted air they will inhale during a day, as Nexus Media News pointed out. That’s part of the reason why the U.S. Environmental Protection Agency (EPA) is giving out almost $1 billion to help school districts in every state plus Washington, DC and several tribes and U.S. territories purchase more than 2,400 clean school buses, as the agency announced in a press release. The other reason, of course, is to give children a future less marred by the impacts of the climate crisis.

“We are witnessing around our country and around the world the effects of extreme climate,” Vice President Kamala Harris said when she announced the grants in Seattle Wednesday with EPA Administrator Michael Regan, as AP News reported. “What we’re announcing today is a step forward in our nation’s commitment to reduce greenhouse gases, to invest in our economy… to invest in building the skills of America’s workforce. All with the goal of not only saving our children, but for them, saving our planet.″

The funding for the new buses comes from the approximately $1 trillion bipartisan infrastructure bill President Joe Biden signed nearly a year ago, as Nexus Media News reported at the time. The bill provided $5 billion for hybrid and electric buses to be distributed over a period of five years, according to a White House Fact Sheet. The first installment of these funds will go to purchase 2,463 buses and 95 percent of them will be electric vehicles.

“President Biden’s historic Bipartisan Infrastructure Law is accelerating our nation’s transition to electric and low-emission school buses while ensuring a brighter, healthier future for our children,” Regan said in the EPA press release. “As many as 25 million children rely on the bus to get to school each day. Thanks to the Biden-Harris Administration, we are making an unprecedented investment in our children’s health, especially those in communities overburdened by air pollution. This is just the beginning of our work to build a healthier future, reduce climate pollution, and ensure the clean, breathable air that all our children deserve.”

The EPA was originally going to distribute only $500 million during the first round of applications for its rebate program. But when applications opened in May, there was so much demand that the EPA nearly doubled the available awards to $965 million. A total of 389 school districts received the grants.

This is only the beginning, as there are around 500,000 school buses in the nation’s fleet, The Hill reported. Most of these are diesel, which produces particulate matter pollution that can harm children’s lungs and worsen respiratory ailments like asthma, the White House noted. Children exposed to diesel exhaust are also more likely to miss school.

White House adviser Mitch Landrieu said the new buses would be made in the U.S. and would mostly be ready by the beginning of the 2023-2024 school year. Another $1 billion in grants has been written into the budget year beginning October 1.

‘Cleaner Air Is Coming’ as London Expands Vehicle Pollution Fee to Entire Metro Area
By Brett Wilkins
By Common Dreams
Dreaming of Beachfront Real Estate? Much of Florida’s Coast Is at Risk of Storm Erosion
By Zhong-Ren Peng
By The Conversation
Will Paris Ban Electric Scooters?
Could the City of Light ban the electric scooters that
By Olivia Rosane