5 Things to Watch for During The Weather Channel’s 2020: The Race to Save the Planet 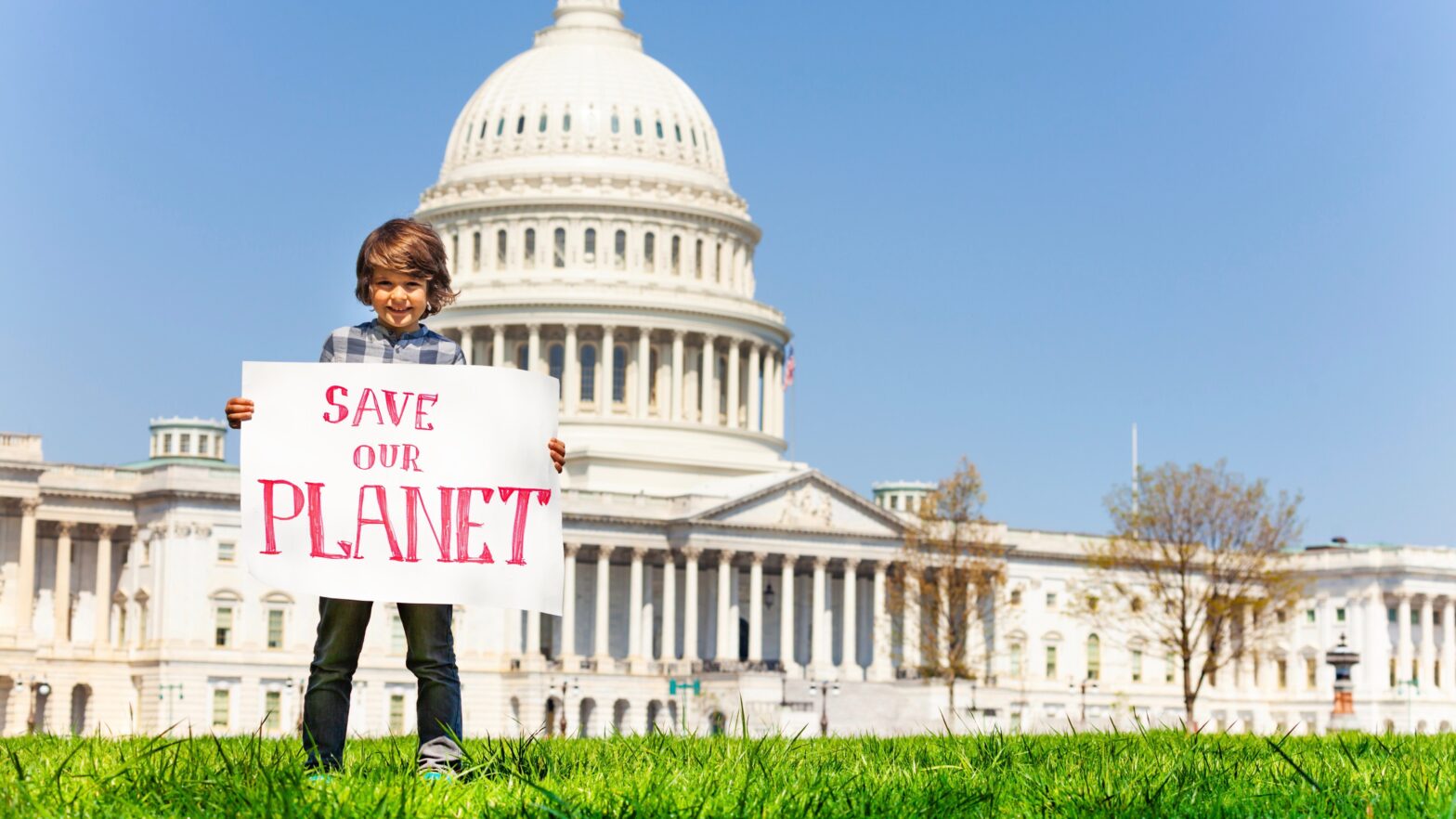 Child boy protest in front of the USA capitol in Washington holding sign saying save our planet. SerrNovik / iStock / Getty Images Plus

The Weather Channel will be airing today a special on climate change, 2020: The Race to Save the Planet, featuring interviews with eight presidential candidates from both parties. It couldn’t come at a more appropriate time: the reality of climate impacts and the opportunities of a just transition to a clean energy economy are crystal clear, and we are desperately in need of federal climate leadership.

2020 Race to Save the Planet will include interviews with five Democratic and three Republican presidential candidates. (President Trump declined to participate). Weather Channel meteorologist Dr. Rick Knabb will be the host.

Here are five things I hope to hear from the candidates:

1. An understanding of the latest climate science and its stark implications.

The U.S. Fourth National Climate Assessment and the IPCC 1.5 C special report make clear that climate change is already with us, causing significant impacts for people, ecosystems and the economy, and that these impacts will greatly worsen if we fail to make swift and deep cuts in global carbon emissions. Yet the current administration is acting in ways diametrically opposed to the science and rolling back or undermining federal climate policies, while continuing to prop up fossil fuel interests. The administration’s continued attacks on climate science are deeply problematic. Our next administration needs to lead with the science and put us firmly on a path to net zero carbon emissions by 2050, if not before.

2. A recognition of the terrible human toll and steep costs of recent climate catastrophes, both here and around the world, and what’s needed to limit these harms going forward.

People around the U.S. have experienced a devastating series of climate-related extreme weather events recently, including the wildfires burning in California right now, record-breaking flooding in the Midwest and the Southeast, the impacts of hurricane Dorian and other intense storms, and an extreme heat wave that blanketed the nation this July. NOAA data show that so-called billion-dollar weather and climate-related disasters are on the rise, and 2019 is the fifth consecutive year in which the U.S. has experienced ten or more of these types of events. Elsewhere in the world, a series of catastrophic climate-related events have also unfolded this year, including Cyclone Idai, Cyclone Fani, Typhoon Hagibis, record-breaking heat waves in Europe and the Arctic, and flooding in Bolivia and Iran. Extreme weather events displaced more than 7 million people in just the first half of 2019. Our current efforts to respond to these extreme events—as well as ongoing slow moving disasters like sea level rise—are falling far short. We need to invest much more in preparing and protecting communities well in advance, including respecting the human rights of those who are displaced.

3. Excitement about the incredible economic and public health benefits of a clean energy transition and support for a suite of policies to accelerate the momentum already underway.

We’ve seen an extraordinary growth in clean, renewable energy resources across the country and are on pace to get to 20 percent renewable electricity by 2020. Double-digit annual cost declines in wind and solar power and battery storage signal the promise of the future. Clean energy has widespread bipartisan support because it means affordable power, jobs and cleaner air and water. We need robust federal policies to ramp up renewable energy and energy efficiency, increase electrification in the transportation and industrial sectors, and invest in enhancing and safeguarding our forests and soils that store carbon. Working across the economy we should aim to get to 100 percent clean energy by 2050, if not before.

4. A commitment to investing in bold climate action that centers justice and equity.

Many communities who have been historically sidelined and discriminated against, who are experiencing a disproportionate health burden of our dependence on fossil fuels and who bear the brunt of climate impacts, want to hear that past injustices will be addressed and their health and well-being will be prioritized in a climate-altered world. Working people whose toil and sweat is the bedrock of our nation’s prosperity need to hear that we will invest in creating good quality jobs and diversifying the economy in their communities as we transition away from fossil fuels to clean energy. Many young people on the cusp of being of voting age (and many even younger) have inspired us with their call to action; they deserve political leaders that are doing their best to safeguard their future. Rural communities whose economic struggles are worsened by climate impacts need solutions that work for them. And around the world millions of people living in poverty need climate solutions that also help raise their standard of living. Our next President must connect climate solutions to people’s daily life concerns. We won’t solve the climate crisis if we don’t solve it in a just and equitable way.

5. A complete disavowal of the Trump administration’s shameful and reprehensible withdrawal from the Paris Agreement, and details of how the U.S. aims to demonstrate global climate leadership.

Earlier this week the administration announced its formal intent to step away from the Paris Agreement, and the U.S. withdrawal will take effect on Nov. 4, 2020, a day after the election. This is yet another cheap political gambit from this administration, a deeply cynical move that shows how little it cares about the health and well-being of future generations and our planet. Our next President must not only rejoin the global climate agreement, but also commit the U.S. to doing its fair share to help meet global goals. That includes contributing finance and technology to help least developed nations transition to clean energy and cope with the impacts of climate change, as well as taking meaningful steps to address the needs of the many around the world who will find themselves displaced by climate change, unable to live safely in the places they call home now.

Political will is the biggest obstacle to climate action.

Despite the fact that an overwhelming majority of American voters support climate action and the latest science underscores the growing urgency to act, we continue to see this issue get sidelined and tangled up in partisan politics. We need to hear clearly from the presidential candidates that they understand their responsibility to act, and act boldly.

In the absence of federal action, many states, cities and local jurisdictions have stepped up to do their part. Our next President should partner with the growing number of state and local officials, business leaders, and others who are making transformational climate action commitments.

The next president needs to both make full use of their executive authority under existing legislation such as the Clean Air Act, and also work with Congress on passing a bold suite of appropriations, tax, clean energy standards and other policies to decarbonize the U.S. economy and help communities deal with mounting climate impacts. It’s also an urgent imperative to support states and communities whose economies and tax bases are currently dependent on fossil fuels to transition to a more sustainable economic model.

We have many of the technological solutions to cut emissions now (and many more on the horizon); the biggest missing ingredient is political will. The window to forestall some of the worst impacts of climate change is fast closing and the next administration and Congress must act quickly and decisively.

It’s a global climate (and economic, humanitarian and environmental) crisis. Let’s start acting like it.

Scientists have been sounding the alarm on climate change for decades. Just yesterday 11,000 of them joined together to issue the World Scientists’ Warning of a Climate Emergency, declaring “clearly and unequivocally that planet Earth is facing a climate emergency.”

Anyone running for President in 2020 should have a bold, actionable plan for how they will address the climate crisis. That’s just a basic prerequisite for the job.

The Weather Channel calls it 2020: The Race to Save the Planet, but the candidates should make no mistake: it’s also the race to save ourselves, our kids and grandkids.