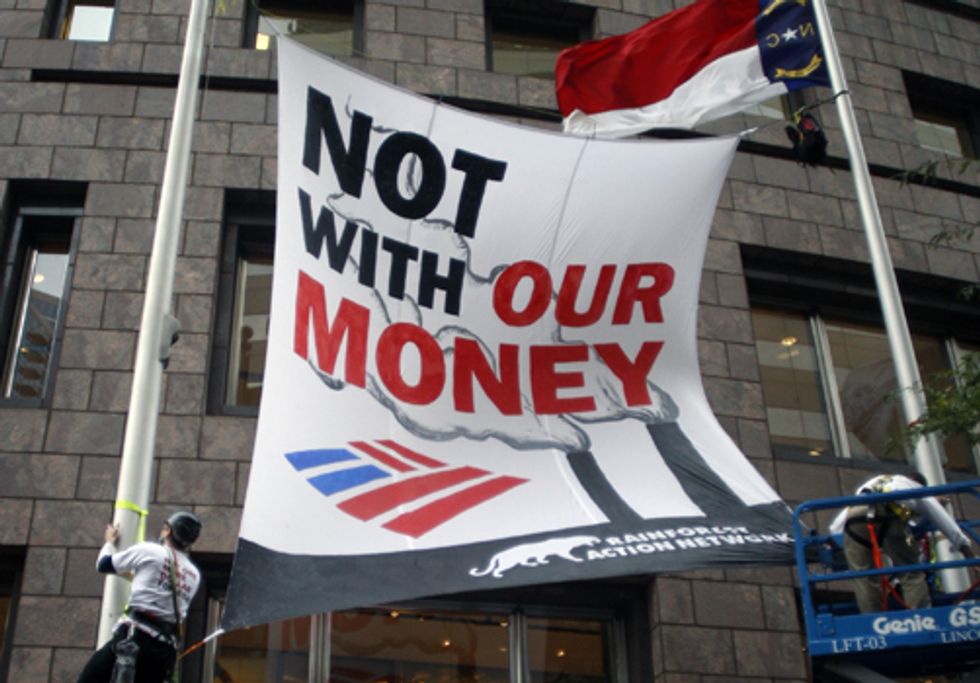 “As the authorities attempt to evict Occupy protestors from public spaces, they are going to start showing up at Bank of America doorsteps across the country. Bank of America is in the center of the Occupy Movement because of its reckless financial practices that put profit before people and planet,” said Amanda Starbuck, Rainforest Action Network’s (RAN) Energy and Finance campaign director. “If Bank of America would like to regain the trust of the 99 percent, it must adopt sound economic and environmental policies that reflect the values of its customers. Bank of America can start by getting out of bed with the coal industry, and shifting its funding toward renewable energy sources that will have long term benefits for our environment, our health and our economy.”

“Bank of America is foreclosing on our neighbors and it's foreclosing on our climate. To be honest, I'm embarrassed that I'm still a customer,” said Jamie Trowbridge, an Appalachian State University student who was one of the two climbers arrested at the protest. “Coal is dirty at every stage in its lifecycle. No longer will Bank of America fund coal with my money. When I get back to school, I'm going to cut up my BoA debit card, and help other students do the same.”

In the past two years alone, Rainforest Action Network has found that Bank of America has pumped $4.3 billion into the U.S. coal industry—$1.3 billion more than other top banks. With the Nov. 15 protest, environmentalists have joined the mounting outrage at Bank of America’s reckless financing practices, a critique which has been on display with the Occupy Wall Street Movement and with the record transfer of customer accounts to credit unions. According to the Credit Union National Association, 700,000 consumers across the nation have joined credit unions since Sept. 29 and credit unions have added $4.5 billion in new savings accounts.

Bank of America funds every sector of the U.S. coal industry, including companies that operate the most controversial coal-fired power plants and the most devastating forms of strip mining, including mountaintop removal coal mining.

Coal is responsible for 40 percent of greenhouse gas emissions and the U.S. is the world’s second largest coal producer. Coal-fired energy generation is responsible for pollutants that damage cardiovascular and respiratory health and threaten healthy child development.

Sign our letter and tell Bank of America Not with Our Money.