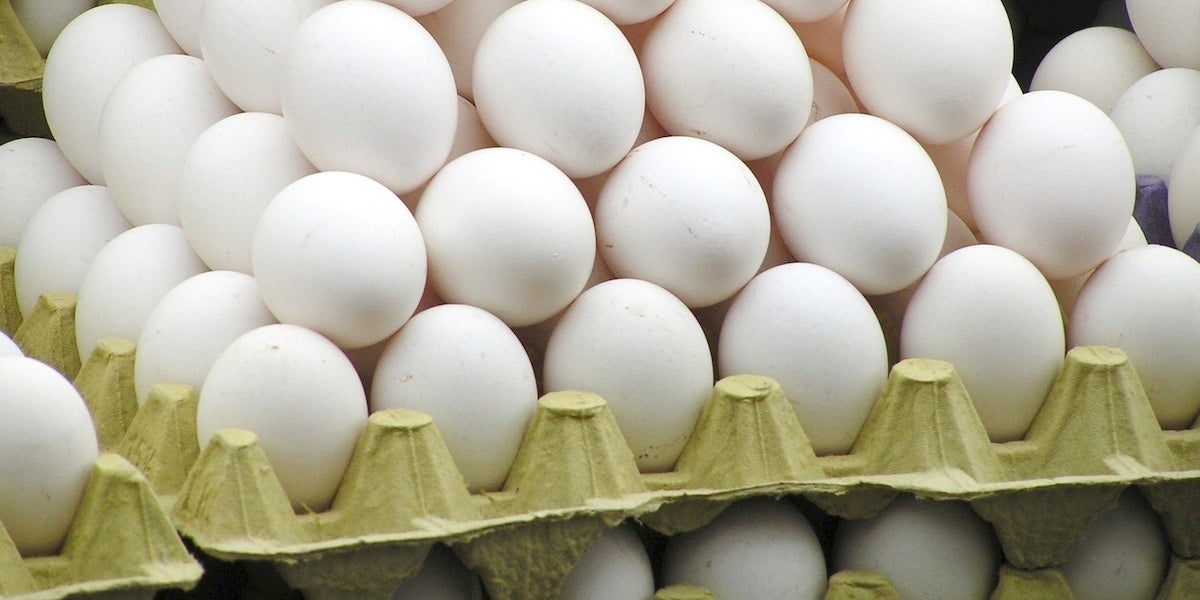 Rose Acre Farms voluntarily recalled more than 206 million eggs after FDA testing determined that the eggs were connected to 22 reported cases of salmonella infections traced back to the farm.

The potentially contaminated eggs have the stamp “P-1065 with the Julian date range of 011 through date of 102 printed on either the side portion or the principal side of the carton or package,” the FDA said. You can also check out the list of affected products here.

“The voluntary recall was a result of some illnesses reported on the U.S. East Coast, which led to extensive interviews and eventually a thorough FDA inspection of the Hyde County farm, which produces 2.3 million eggs a day. The facility includes 3 million laying hens with a USDA inspector on-site daily,” the FDA said.

The recall is the largest in the U.S. since 2010, when an Iowa farm recalled 550 million eggs due to a salmonella outbreak, according to Food Safety News, There were 1,939 reported salmonella infections likely associated with that outbreak.

Michael Pollan, author of The Omnivore’s Dilemma, frequently comments about the true costs of such large-scale, high-risk food-production plants, and why it may be worth it to pay more for our eggs.

“We all like cheap food. But when we’re spending billions to deal with a salmonella outbreak, it isn’t really as cheap as it seems,” Pollan told CNN’s Sanjay Gupta back in 2010.

“I buy farmer’s market eggs,” Pollan also told CBS News that same year. “They cost more, but are a better product in every way, including taste and—because they come from small flocks that get to spend time outdoors—are safer as well. You’ll spend 50 cents an egg instead of 13, but this is definitely a case of you get what you pay for.”

According to the CDC, shell eggs may become contaminated with salmonella through the laying process, once the eggs are laid, through poultry feed or bedding. Eggs can also become contaminated from the droppings of poultry. The prevalence of salmonella is lower in live organic chicken than in conventionally raised live chickens, a 2010 study found.

Salmonella can cause fever, diarrhea, nausea, vomiting and abdominal pain. In some cases, it can result in fatal infections, especially in young children, frail or elderly people, and others with weakened immune systems.

If you are a health-conscious/environmentally minded egg eater, here’s a handy reminder on the best eggs. Basically, you want to seek out: Pastured > Omega-3 > Organic > Free Range/Cage Free > Conventional.

Consumers who have purchased the eggs involved in the latest outbreak are urged to immediately discontinue use of them and return them to the place of purchase for a full refund. Anyone with questions may contact the company at (855) 215-5730 between the hours of 8 a.m. to 5 p.m. Eastern Standard Time.