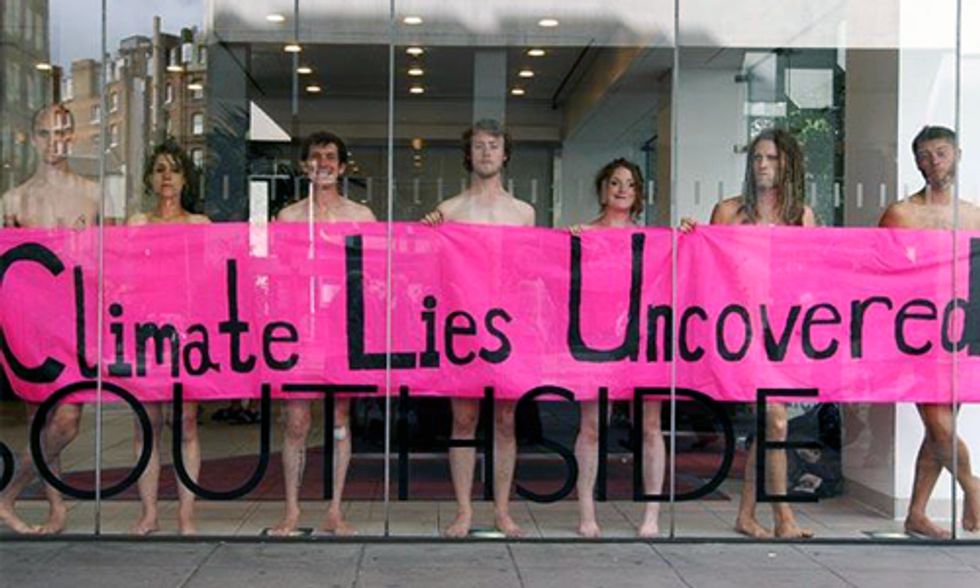 This past April, Climate Investigations Center sent out a survey, querying the world's largest PR firms on whether they would accept a client who denied the reality of climate change.

The results, published in The Guardian two weeks ago, included responses from 10 of the 25 firms they sent the survey to.

Some of the world’s top PR companies have for the first time publicly ruled out working with climate change deniers, marking a fundamental shift in the multi-billion dollar industry that has grown up around the issue of global warming. Public relations firms have played a critical role over the years in framing the debate on climate change and its solutions–as well as the extensive disinformation campaigns launched to block those initiatives.

But one company, Edelman, the world's largest independently owned PR company, handled the inquiry in a clumsy manner that's stirred up controversy and bad press for the company.

While noting the Edelman is actively working to reduce its own carbon footprint, The Guardian reported:

An initial response to CIC from Edelman inadvertently included an internal email which said: “I don’t believe we are obligated in any way to respond. There are only wrong answers for this guy.”

That comment was sent out by Mark Hass, then head of Edelman U.S. He's no longer with the company for reasons that aren't entirely clear.

The previous day, an article by Merchant, "How the World's Biggest PR Firm Helps Promote Climate Change Denial," discussed in detail how Edelman clients, including American Petroleum Institute and the controversial American Legislative Exchange Council (ALEC) which has been pushing legislation mandating the teaching of climate change "skepticism" in schools, have worked to downplay or even deny human-caused climate change, with help from the PR firm. He related that "Edelman helps polluting companies use TV ads, astroturf groups, and slick websites to promote climate change denial around the globe."

His article charged that "The Investigative Fund alleges that some of Edelman's pro-oil and gas projects are so blatantly politically targeted that it should be registered as a lobbying group—and that by not doing so, it's breaking the law. ... Edelman is so aggressive in blurring the lines with its promotion of fossil fuel companies, it may be engaging in illegal behavior."

Clearly, that's not good PR for the PR firm.

"I just want you to know we're not bad people, that's all," Edelman told Merchant in that contrite phone call.

When Merchant asked if he felt his firm's position on climate change had been misrepresented, Edelman said "Yes. Deeply. Deeply. I don't blame the Guardian reporter any more than I blame you—I blame the ham-head who filled out the questionnaire to be a little, uh, slick. I do want you to know I respect what you did as a journalist and, you know, you haunted me."

However, the next day, the company's website said that Merchant had misrepresented its position on climate change. And Edelman tried to walk back on his awkward comments in his call to Merchant, saying in an email "My intention was to simply clarify Edelman does not accept client assignments that deny climate change. I regret several of the remarks I made beyond that.”

Then this weekend, the New York Times covered the flap, as the company continues to try to undo the damage surrounding its remarks. It reported that Ben Boyd, Edelman's New York president for practices, sectors and offerings, said in an interview on Friday, "Lesson learned" and that in the future “We will treat ourselves like we treat a client. Just because you advise clients on the complexities of today’s world that doesn’t mean they’re easier to manage."

Kert Davies of Climate Investigation Center said he hopes the organization's survey and the attention surrounding the responses will influence PR firms' decisions to take on clients who work against mitigating the impact of climate change.

We got their attention and hope that Edelman and others will be making decisions as a company with climate change more top of mind here forward. But there is a long way to go. These ad firms still have multimillion-dollar contracts with fossil fuel companies to promote more oil, gas and coal mining and drilling, access to public lands, and avoidance of taxes and regulations. If they are doing a campaign to promote fossil fuels and they avoid talking about the climate impacts, that's climate denial.

Part I: How the Media Help the Koch Brothers and ExxonMobil Spread Climate Doubt