EcoWatch Partners with RebelMouse to Amplify Its Reach, Impact and Engagement 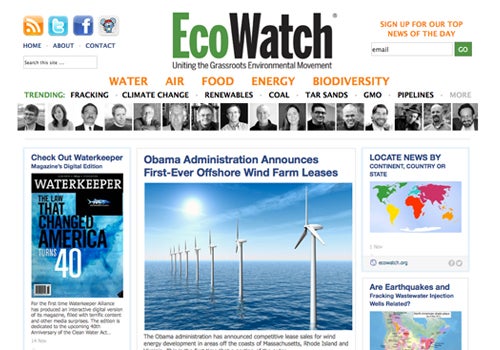 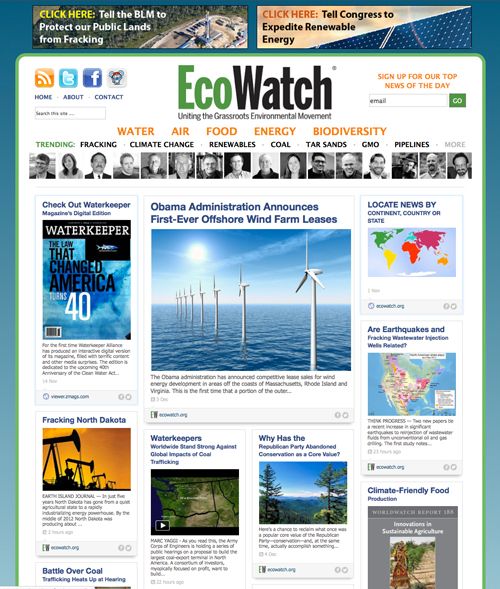 EcoWatch, a cutting edge environmental news service, today announced its partnership with RebelMouse to enhance and accelerate its ability to share content to a broad audience.

“EcoWatch has a strong voice, a strong mission and is very engaged on all the major social networks, which makes it a perfect partnership,” said RebelMouse’s Founder and CEO Paul Berry. “RebelMouse gives EcoWatch a powerful platform with custom stats that makes it hyper efficient and cost effective to run a highly active news site. RebelMouse enables organizations and individuals to organize their activity across allthese networks into beautiful and engaging social front pages which amplifyreach, impact and engagement.”

“Using the RebelMouse platform, EcoWatch will become a stronger voice for grassroots environmentalism,” said Robert F. Kennedy, Jr., President of Waterkeeper Alliance. “EcoWatch’s mission is rooted in the assumption that democracy and a wholesome, safe environment are intertwined.”

EcoWatch is the result of more than two decades of passion and commitment to publishing environmental news for Founder and Editor Stefanie Penn Spear who works to educate and mobilize millions of people to engage in democracy to protect human health and the environment. “My goal is to motivate individuals to become active in their community by adopting and promoting sustainable practices, and supporting strong environmental policy,” said Spear. “EcoWatch helps people make the connection between how they spend their daily lives and dollars, and its impact on the health of their family, friends and planet.”

EcoWatch unites the voices of the grassroots environmental movement by providing a venue for news pertaining to water, air, food, energy and biodiversity, and showcases the insights of world-renowned environmental leaders. EcoWatch exposes the corporations that are avariciously exploiting natural resources and putting profits before human health and the environment, and highlights solution-based approaches to create a sustainable world.

The shore of the Cuyahoga River in Cleveland, Ohio, is the perfect home for this blossoming news service, as the notorious 1969 burning of the river ignited the modern-day environmental movement and inspired the passage of the 40-year-old Clean Water Act.

About RebelMouse:
RebelMouse is a startup in NYC that makes it simple and easy for individuals and companies to have powerful and engaging social front pages and websites. Those active on social are spread thin between Facebook, Twitter, Instagram and other majorsocial networks. Yet, at the same time, their websites don’t reflect the work they’ve been doing. RebelMouse amplifies and unifies these efforts into onebeautiful and engaging front page. Founded by the previuos CTO of HuffingtonPost and backed by top VCs, angels and advisors, RebelMouse launched in June and has seen explosive growth. Learn more and sign up at rebelmouse.com.

About Waterkeeper Alliance:
Founded in 1999, Waterkeeper Alliance is a global environmental movement uniting more than 200 Waterkeeper organizations around the world and focusing citizen advocacy on the issues that affect our waterways, from pollution to climate change. Waterkeepers patrolmore than 1.5 million square miles of rivers, streams and coastlines in the Americas, Europe, Australia, Asia and Africa.