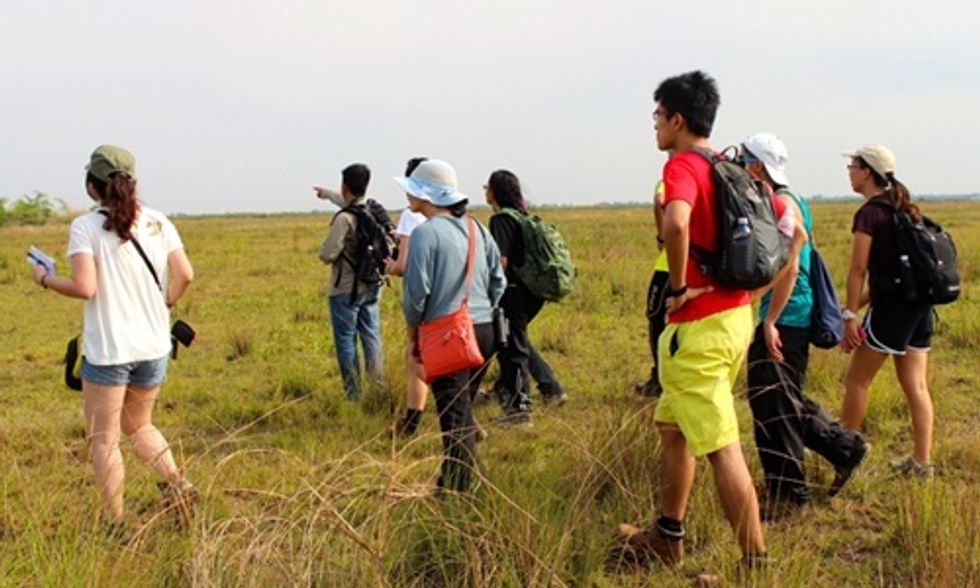 Sunny Zhang is a junior at Duke University studying Environmental Science and Public Policy. She enjoys roadtrips, reading about nature and upcycling.

As a college student, getting up on a weekend before 10 a.m. is a rare occasion. Surprisingly, I found myself awake at 4:30 a.m., the morning after my 20th birthday, waking up to watch birds.

I was on a study abroad class field excursion, at the Bengal Florican Conservation Areas in the grasslands of Kompong Thom, Cambodia, partly to observe birds. Mainly, we were there to observe ecotourism in action, or responsible and educated travel to natural areas that conserves the environment while sustainably benefiting the local community.

My class toured with the Sam Veasna Center (SVC), a non-profit local Cambodian NGO that manages wildlife viewing trips. Its goal is aligned with the definition of ecotourism: to provide sustainable livelihoods for local Cambodian communities from ecotourism, while preserving conservation sites. SVC provides the communities with income and employment in exchange for no-hunting and land-use agreements.

And to be honest, I was not expecting much, especially at 4:30 a.m., a time college students are more likely to be staying up than waking up. But the morning was filled with adrenaline rushes, watching beautiful and critically endangered Bengal Floricans. The 20 students in my class, posing as amateur birders, were absolutely hooked.

It is estimated that there are less than 1,000 Bengal Florican birds left in the world, the overwhelming majority of which live within and depend on the conservation area. But large portions of Cambodian grasslands are being converted to usage for rice cultivation. The Bengal Florican grasslands could have been turned into agricultural farmlands, and the birds that we watched could have easily been pressured to extinction due to loss of habitat. The area is also important for the preservation of many other bird species.

Just as interesting as the birds though, was the system that was set in place to protect them. SVC attracts eco-tourists to Cambodia, who pay to go on wildlife viewing expeditions. A portion of the price tourists pay is given to the village for conserving the wetland area, on conditions of refrains on hunting and farming on the land. Later, SVC guides told our class that around 24 percent of a tourist’s fee will go towards conservation, with another 15 percent of the payment paying for local services. On average, communities get around $20,000 per year through their contracts with SVC.

We spoke to villagers later that day, and they were pleased and proud of the program. Kunthea, one of our SVC guides, translated the sentiments of an old villager:

“From 1979 until now, [I] thought everything from wildlife would be gone, lost. [I] worried about the future, and [I] didn’t know the Bengal Florican birds were still in the woods. So when [I] saw the tourists coming, [I] was happy.”

Village leaders were also strong advocates of the program—the village uses the benefits from its contract with SVC on community development projects, such as running schools or building wells.

It’s not to say there isn’t any room for improvement. My class observed that perhaps there needed to be more planning for long-term local development that minimized impacts on conservation areas. Paying for preservation of the land also makes it vulnerable to be bought out for a higher amount by developers or other business interests.

But undoubtedly, SVC is making a positive impact in Cambodia, and it shows promising conservation influence. The Sam Veasna Center is doing its part in saving the Bengal Florican, while aiding the local community—now that’s helping two birds with one eco-tour.