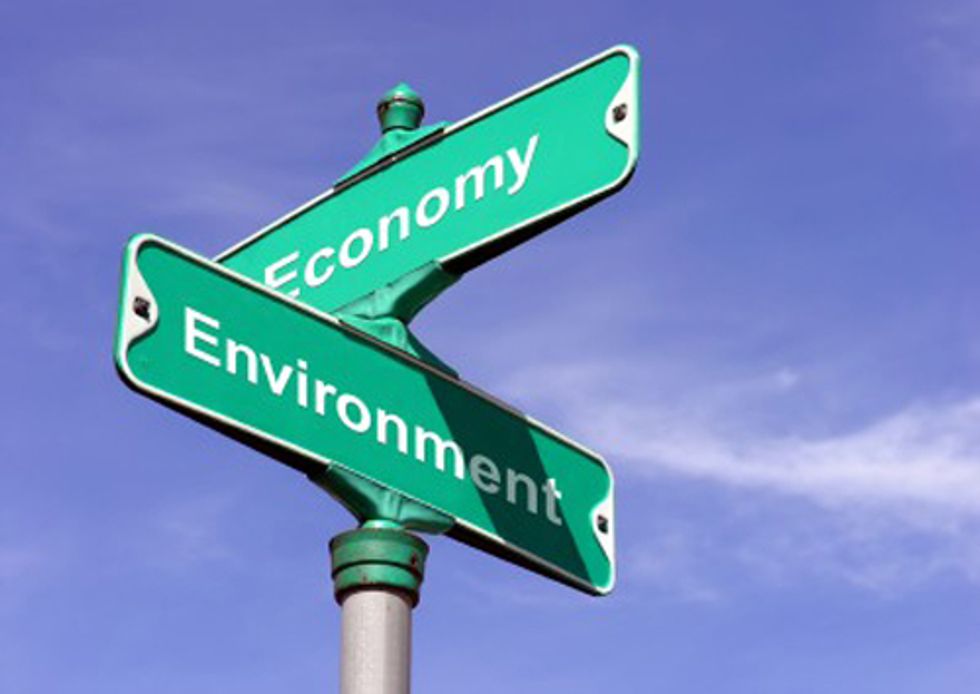 The failure of world leaders to act on the critical issue of global warming is often blamed on economic considerations. Over and over, we hear politicians say they can’t spend our tax dollars on environmental protection when the economy is so fragile. Putting aside the absurdity of prioritizing a human-created and adaptable tool like the economy over caring for everything that allows us to survive and be healthy, let’s take a look at the economic reality.

A new scientific report concludes that climate change is already costing the world $1.2 trillion a year and is eating up 1.6 percent of global GDP, and rising. It’s also killing at least 400,000 people every year, mainly in developing countries. That’s not counting the 4.5 million people a year who die from air pollution caused by burning fossil fuels.

As Michael Zammit Cutajar, former executive secretary of the UN Framework Convention on Climate Change, told the Guardian: “Climate change is not just a distant threat but a present danger—its economic impact is already with us.”

But we’re to believe that corporate profits, ever-increasing growth, consumer culture, disposable products and often-meaningless jobs to keep it all going are more important than the health and survival of humans and other species, and true long-term economic prosperity.

The report, Climate Vulnerability Monitor: A Guide to the Cold Calculus of a Hot Planet, was compiled by 50 scientists, economists and experts for the Europe-based non-governmental organization DARA and 20 countries that joined to form the Climate Vulnerable Forum.

As stated in the preface, it “challenges a conventional view: that global action on climate change is a cost to society. Instead, it enlightens our understanding of how tackling climate change through coordinated efforts between nations would actually produce much-needed benefits for all.”

The report’s authors also conclude that the challenges of global poverty and climate change “can be tackled simultaneously with the same policy framework that would shift our development path to a low-carbon footing,” creating “jobs, investment opportunities, new possibilities for international cooperation and technological deployment to the benefit of all.”

Although the researchers note that adaptation must be part of any climate change strategy, they caution that “treating only the symptoms but not the cause of the climate crisis would result in spectacular economic losses for the world economy.”

It shouldn’t be surprising to realize that using finite resources in a wasteful manner and at a pace much faster than the Earth’s ability to replenish them is economic folly. Nor should we be surprised to learn that polluting, damaging and destroying the natural systems that keep us alive and healthy will not be good for our long-term prosperity, economic or otherwise.

Rapid population growth and technological innovation, combined with our lack of understanding about how the natural systems of which we are a part work, have created a mess. We have altered the physical, chemical and biological properties of the planet on a geological scale. We have left no part of the globe untouched. French scientists who recently completed a two-and-half-year journey covering more than 112,000 kilometres through the Atlantic, Pacific, Antarctic and Indian oceans found plastic debris in a remote ocean area that was thought to be pristine.

Researchers on the boat Tara, who were studying the effects of climate change on marine ecosystems and biodiversity, found plastic fragments in the Southern Ocean and Antarctica at levels comparable to the global average. “The fact that we found these plastics is a sign that the reach of human beings is truly planetary in scale,” said Chris Bowler, scientific co-ordinator of Tara Oceans, quoted in the Guardian. It also reminds us that we live on a planet where everything is connected.

We must learn to shift our ways of thinking. We have to stop using so many disposable plastic items and fossil fuels. We need to conserve resources and energy and stop being so destructive. The DARA report offers many recommendations for governments, policy-makers, civil society, the private sector and the international development and humanitarian communities.

Its advice for communicators applies to all of us: question received wisdom, recognize awareness of risks as an opportunity and take a stand. Economies must function to serve people, not just short-sighted and often-destructive corporate interests.