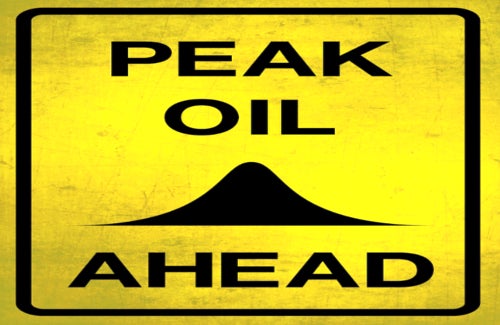 Researchers from the University of Maryland (UMD) and a leading university in Spain demonstrate in a new study which sectors could put the entire U.S. economy at risk when global oil production peaks—known as “Peak Oil.” This multi-disciplinary team recommends immediate action by government, private and commercial sectors to reduce the vulnerability of these sectors. Their work, “Economic Vulnerability to Peak Oil,” appears in Global Environmental Change.

While critics of Peak Oil studies declare that the world has more than enough oil to maintain current national and global standards, these UMD-led researchers say Peak Oil is imminent, if not already here—and is a real threat to national and global economies. Their study is among the first to outline a way of assessing the vulnerabilities of specific economic sectors to this threat, and to identify focal points for action that could strengthen the U.S. economy and make it less vulnerable to disasters. 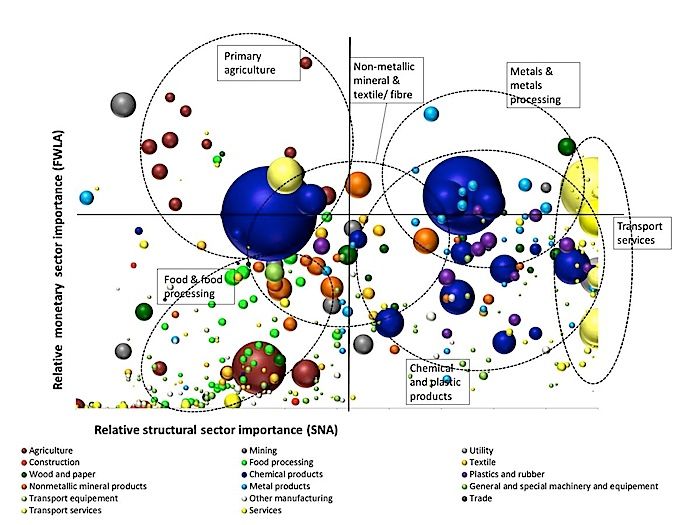 The figure above shows sectors’ importance and vulnerability to Peak Oil. The bubbles represent sectors. The size of the bubbles visualizes the vulnerability of a particular sector to Peak Oil according to the expected price changes; the larger the size of the bubble, the more vulnerable the sector is considered to be. The X axis shows a sector’s importance according to its contribution to GDP and on the Y axis according to its structural role. Hence, the larger bubbles in the top right corner represent highly vulnerable and highly important sectors.

A focus on Peak Oil is increasingly gaining attention in both scientific and policy discourses, especially due to its apparent imminence and potential dangers. However, until now, little has been known about how this phenomenon will impact economies. In their paper, the research team constructs a vulnerability map of the U.S. economy, combining two approaches for analyzing economic systems. Their approach reveals the relative importance of individual economic sectors, and how vulnerable these are to oil price shocks. This dual-analysis helps identify which sectors could put the entire U.S. economy at risk from Peak Oil. For the U.S., such sectors would include iron mills, chemical and plastic products manufacturing, fertilizer production and air transport.

“Our findings provide early warnings to these and related industries about potential trouble in their supply chain,” UMD Professor Klaus Hubacek said. “Our aim is to inform and engage government, public and private industry leaders, and to provide a tool for effective Peak Oil policy action planning.”

Although the team’s analysis is embedded in a Peak Oil narrative, it can be used more broadly to develop a climate roadmap for a low carbon economy.

“In this paper, we analyze the vulnerability of the U.S. economy, which is the biggest consumer of oil and oil-based products in the world, and thus provides a good example of an economic system with high resource dependence,” Professor Hubacek continued. “However, the notable advantage of our approach is that it does not depend on the Peak-Oil-vulnerability narrative but is equally useful in a climate change context, for designing policies to reduce carbon dioxide emissions. In that case, one could easily include other fossil fuels such as coal in the model and results could help policy makers to identify which sectors can be controlled and/or managed for a maximum, low-carbon effect, without destabilizing the economy.”

One of the main ways a Peak Oil vulnerable industry can become less so, the authors say, is for that sector to reduce the structural and financial importance of oil. For example, Hubacek and colleagues note that one approach to reducing the importance of oil to agriculture could be to curbing the strong dependence on artificial fertilizers by promoting organic farming techniques and/or reducing the overall distance travelled by people and goods by fostering local, decentralized food economies.

The Peak Oil dialogue shifts attention away from discourses on “oil depletion” and “stocks” to focus on declining production rates (flows) of oil, and increasing costs of production. The maximum possible daily flow rate (with a given technology) is what eventually determines the peak; thus, the concept can also be useful in the context of other renewable resources.

Improvements in extraction and refining technologies can influence flows, but this tends to lead to steeper decline curves after the peak is eventually reached. Such steep decline curves have also been observed for shale gas wells.

“Shale developments are, so we believe, largely overrated, because of the huge amounts of financial resources that went into them (danger of bubble) and because of their apparent steep decline rates (shale wells tend to peak fast),” according to Dr. Christian Kerschner.

“One important implication of this dialogue shift is that extraction peaks occur much earlier in time than the actual depletion of resources,” Professor Hubacek said. “In other words, Peak Oil is currently predicted within the next decade by many, whereas complete oil depletion will in fact occur never given increasing prices. This means that eventually petroleum products may be sold in liter bottles in pharmacies like in the old days.”