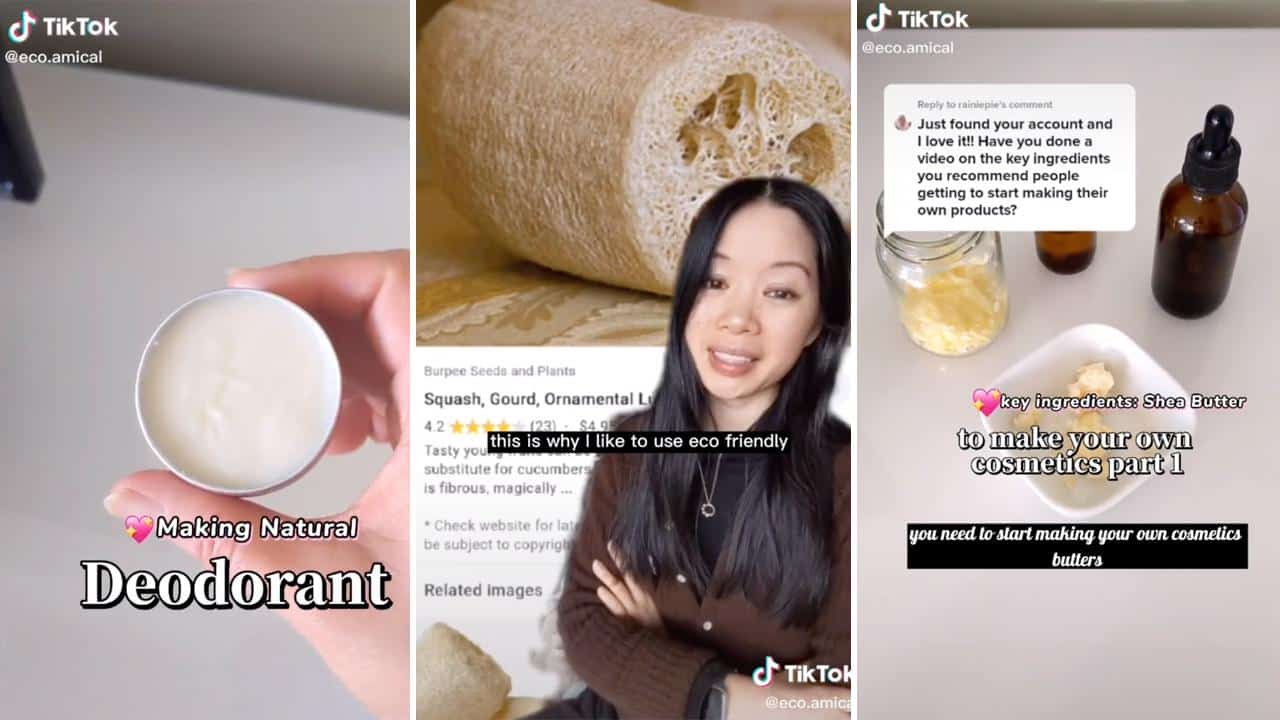 It began with a quick upload. In early 2020, Canadian-based actress Christine Lan uploaded a video describing how she made DIY, sustainable cosmetics in her home. She hadn’t posted regularly on TikTok before and didn’t expect much to come from her video. Christine’s following began to grow. Followers and commenters were not only asking her how to make environmentally friendly makeup for themselves, but they wanted to know if they could purchase it.

Christine is also a creator for EcoTok, which is a sort of “hype house” for environmental creators that range from professional environmentalists, students who are interested in sustainable products, and creators that want to educate others on environmental justice movements. I recently gave Christine a call about her life as an actress, online creator, and business owner. She’s also a mom with kids who are also interested in environmentalism and content creation. She says they often help her with uploads and ideas, which makes her full schedule a bit easier to manage.

This interview has been condensed for length and clarity.

Angely: When did you start your journey as an environmental content creator on TikTok?

Christine: I always had an Instagram that I posted on every so often. It was mostly like a diary of the things that I did, and then I went on TikTok and I just posted randomly once a month or once every two months. And then I had a video go viral all at once and then I felt really pressured like, ‘oh my god I have to post every day.’ And so since I had the video go viral, I think it was February or March of 2020, I started posting every day. And at the time a friend told me “stay in your niche, like cosmetics.” But I’m not really a makeup girl, I just make my own makeup, and it happens to reduce waste, so I felt like I wasn’t very motivated to post every day about makeup so then I started to post about environmental stuff and things that I do to reduce waste and that’s when my following came in.

A: What was the video that went viral and launched your environmental content?

C: It was a video where I was introducing that I’m the boss of my own company and I make my own products that are in recycled tins and all the ingredients are safe for the planet. It was just an introduction. And I think we’re at like 300,000 views or something … so that was the first viral video on the account.

A: Why did you start making low waste makeup in the first place, what was some of your early inspiration for experimenting and making custom items?

C: I grew up in a family that didn’t have much money. Everything I would wear came from my sister’s clothes that were seven years older than me, so I was always out of fashion. I was used to DIY everything, I used to make my own necklaces out of paper clips. I used to paint my own shirts, and I was part of the environmental club when I was in high school – I think there were only four people in the club. And so I liked making my own stuff, it really helped reduce waste.

A: How did that sustainable upbringing become part of your adult/professional life?

C: As an actress, I used to wear makeup to auditions and I felt like a hypocrite because everything was in plastic, and my skin would break out after the audition because I would have to wear makeup a few times. And so I wanted to make my own because eco-friendly makeup can be quite expensive, and I didn’t want to be spending $40 for a mascara. So I quit makeup cold turkey, and I went to my auditions — it took me a while to get used to my natural face, because I used to wear a lot of makeup. And after a year, I was like okay I’m confident with my eyebrows and the shape of my eyes without having to wear eyeliner. Let’s see if I can make something subtle, and something that looks more like me. And since then I’ve been making my own makeup.

A: How did that lead to the opportunity to start working with EcoTok … how did you become a creator?

C: Alex, the creator of EcoTok contacted me, along with I think about 10 other people, and asked if we were willing to do some kind of hype house for environmentalists. And I said okay, why not. And it’s been really good because they’re so organized. So we have this content creator calendar and we can fill out when we’re deciding to post — we each have our own area of expertise. It’s a lot of fun because they’re very like-minded and we talk to each other every day.

A: It’s been amazing to see the different types of communities created by TikTok, especially for people who are worried about the climate crisis and want to create educational videos. What was it like finding that online community?

C: It was very different because in my real life, not many of my friends are into environmentalism, so I never really talked about it that much. I mean I brought my own utensils to parties, but it wasn’t something that other people did. I didn’t really know the environmental community until Alex reached out to me to join EcoTok … it was fun and I find it a lot more creative than looking at Instagram. It felt good to find people that had the same kind of values.

A: You mentioned that you’re one of the few people you know in person who really care about sustainability, what was it like to see the response your first viral video received last year?

C: I had no idea and I knew that a lot of people were interested, there were a lot of, like, whenever a video goes viral, you get negative comments and positive comments. But there were a few people that were very interested more in the making side than in the buying side, so it’s nice to be able to teach people how to do mostly everything DIY and I just expanded my account into mostly everything [environmental] DIY.

C: I’m going to be extending my cosmetics line to steer away from homemade and get them more lab-made and certified. So that should be a long-term process — so hopefully by next summer I’ll have [sustainable, low waste] skincare products that you can buy at hopefully mainstream stores.

Angely Mercado is a New York City born and bred freelance writer, researcher, and fact-checker. She was educated in journalism and research through the CUNY system and holds a masters from the Newmark Craig Graduate School of Journalism.