The Story Behind the Beauty Industry’s Most Eco-Friendly Packaging 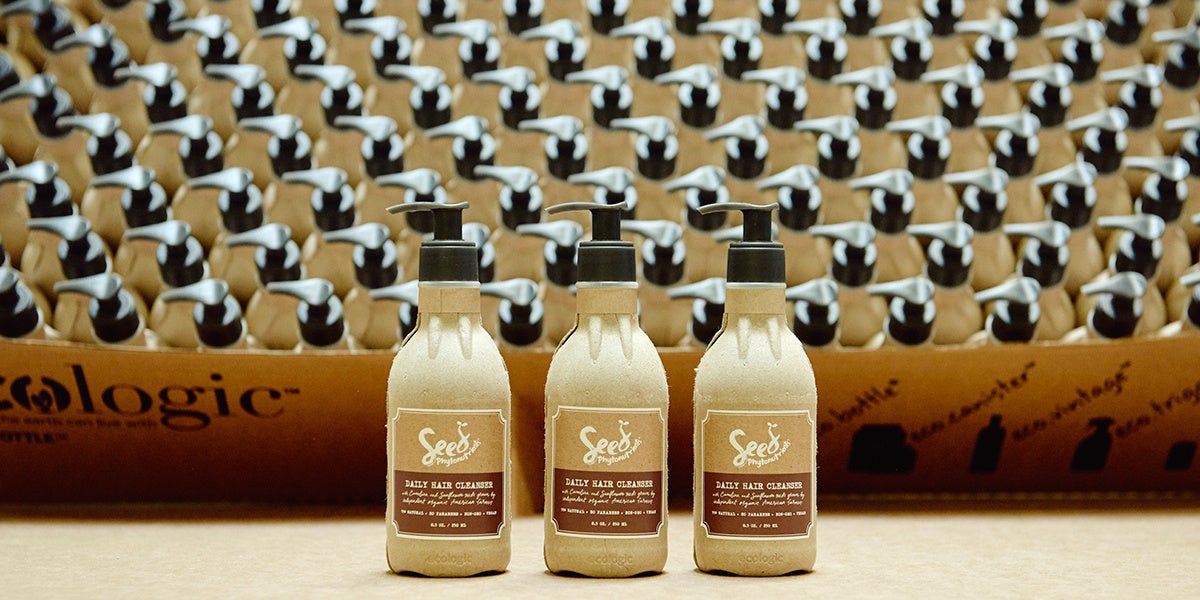 Here’s a sobering fact: The average American generates 4.4 pounds of trash daily, a whopping 30 percent of it packaging. Some people might read that statistic and vow to be stricter about recycling. Julie Corbett took things a tad further.

For Corbett, the wake-up call came in 2008, when her daughters’ elementary school in Berkeley, California, adopted a zero-waste policy (no Ziploc bags, only reusable water bottles). Suddenly, the mom of two started questioning the sustainability of every item in her family’s household, from milk cartons to cleaning supplies. “The innovation on the product side was there,” Corbett recalls. “Yet in packaging, it was the same old thing.”

Inspired by the then-new iPhone’s curved fiber nesting tray and the Canadian milk pouches of her youth, Corbett envisioned an environmentally-friendly bottle with an outer shell of recycled paper concealing a thin, plastic, recycled liner inside. The concept could, she believed, reduce carbon emissions by more than a third. Turning it into a full-fledged company, however, proved an uphill climb. “Potential investors thought I was just some chick from Berkeley who didn’t know what she was talking about,” Corbett said. Until, that is, she ran a successful test pilot with a local dairy at an Oakland Whole Foods. 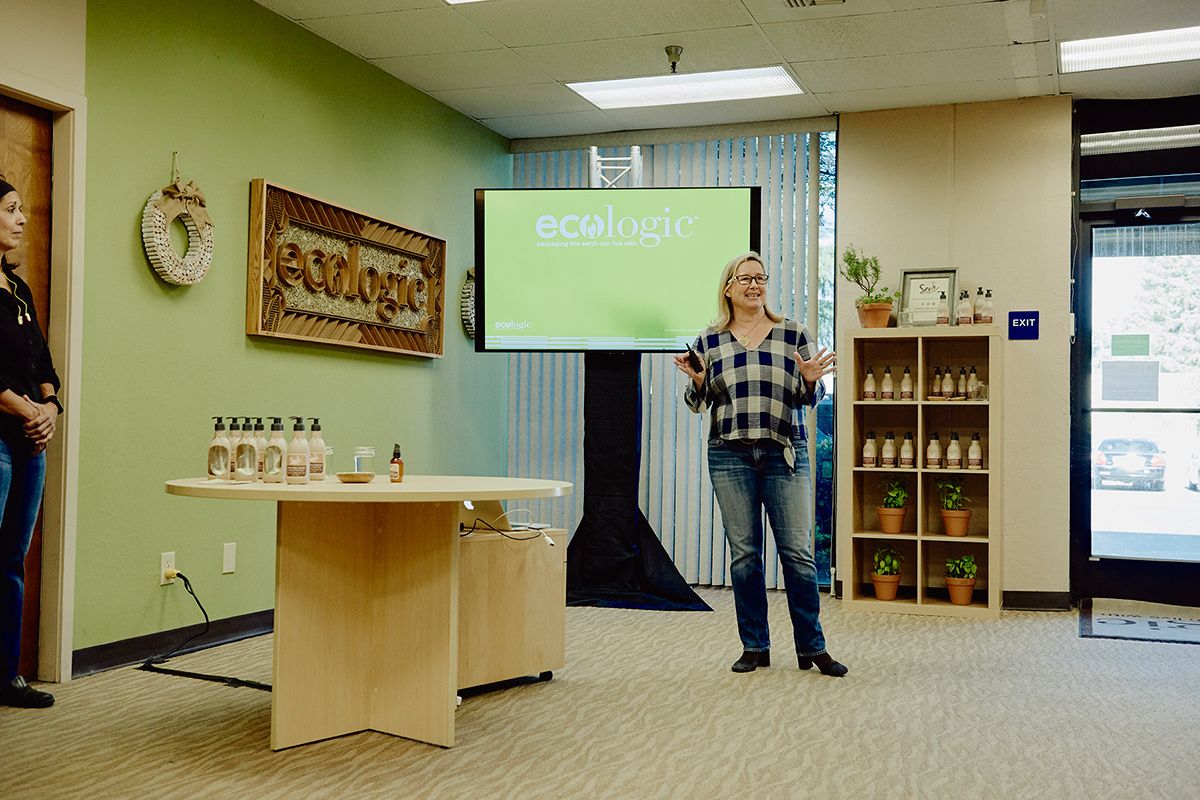 Julie Corbett, president and founder of Ecologic, tells her story at the company’s factory in Manteca, California.

By 2013, Corbett’s enterprise, Ecologic, claimed a bustling a factory in Manteca, California, and a client list that included Seventh Generation and Nestlé. Business appeared to be booming. In truth? “We struggled to find the right technology, equipment, and people,” she admited, explaining that Ecologic relied too heavily on manual labor and found it impossible to scale. So focused was the company on fixing the manufacturing process that they began ignoring calls and emails from potential clients—among them, Scott Schienvar, head of supply chain operations at L’Oreal.

At the time, in mid-2016, Schienvar had been tasked with tracking down the maker of Seventh Generation’s packaging for a new purist brand, Seed Phytonutrients, that L’Oreal was incubating. He hit a brick wall at Ecologic. “They were ignoring us,” he remembered. “So I totally stalked them.”

Schienvar isn’t exaggerating: When his emails to Corbett went unanswered, he contacted her on—where else?—Facebook. “I got a Facebook message from Scott going, ‘Please call,'” Corbett said. “Then 10 minutes later, I got another message. I thought, ‘I should call this guy back, because at this point, I’m being rude.” Though she planned to let him down politely, Schienvar proved persistent.

“We’re coming to Manteca to see you,” he said. 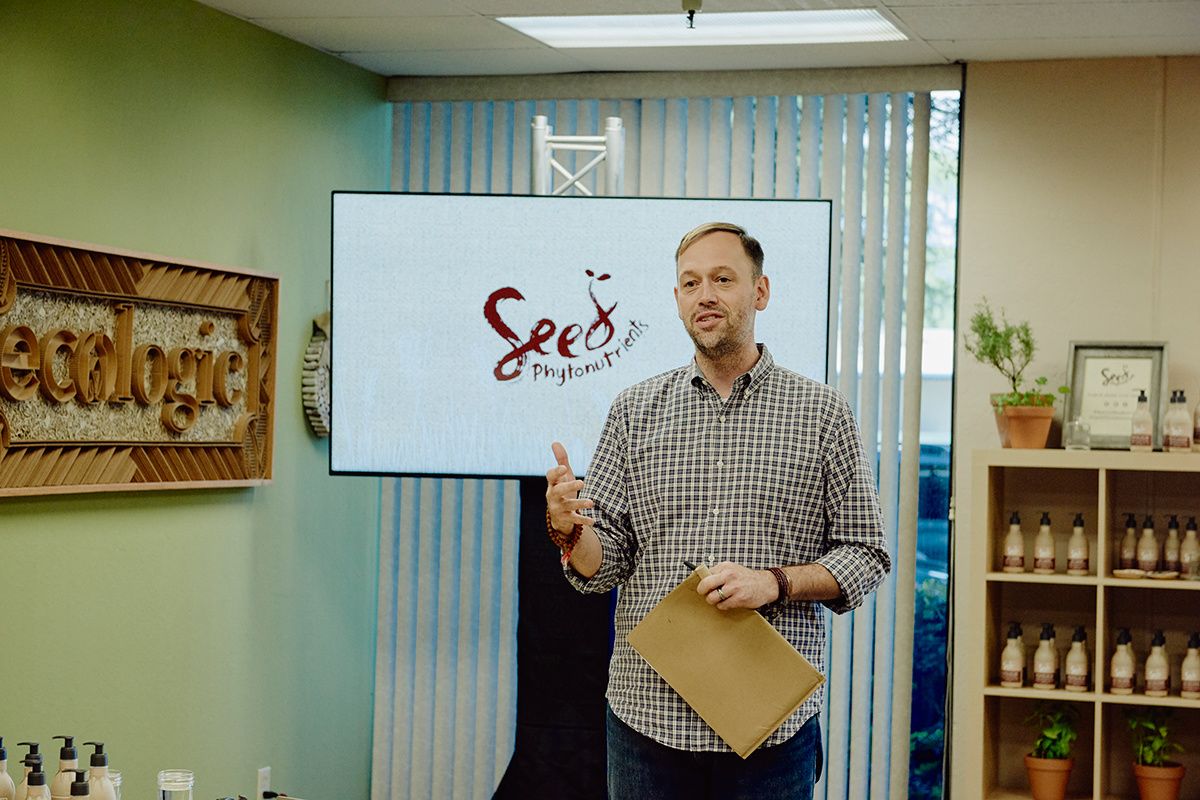 Within days, he and Seed’s founder, Shane Wolf, were sitting down in California with Corbett and Greg Rodrigues, Ecologic’s new CEO, whose experience in manufacturing has helped transform the company. Seed’s message immediately resonated and they believed —”Shane’s vision is authentic,” Corbett said—but could Ecologic handle the volume required? Even if they could, Shane wanted things they couldn’t yet deliver: The packaging had to be recyclable and compostable—that meant glue was out. It also had to withstand a hot shower environment—when an uncoated paper container gets wet, it becomes soggy and falls apart, especially when shampoo suds further weaken the structure. And to reduce waste, the plastic pouch needed to be thinner than any other on the market. 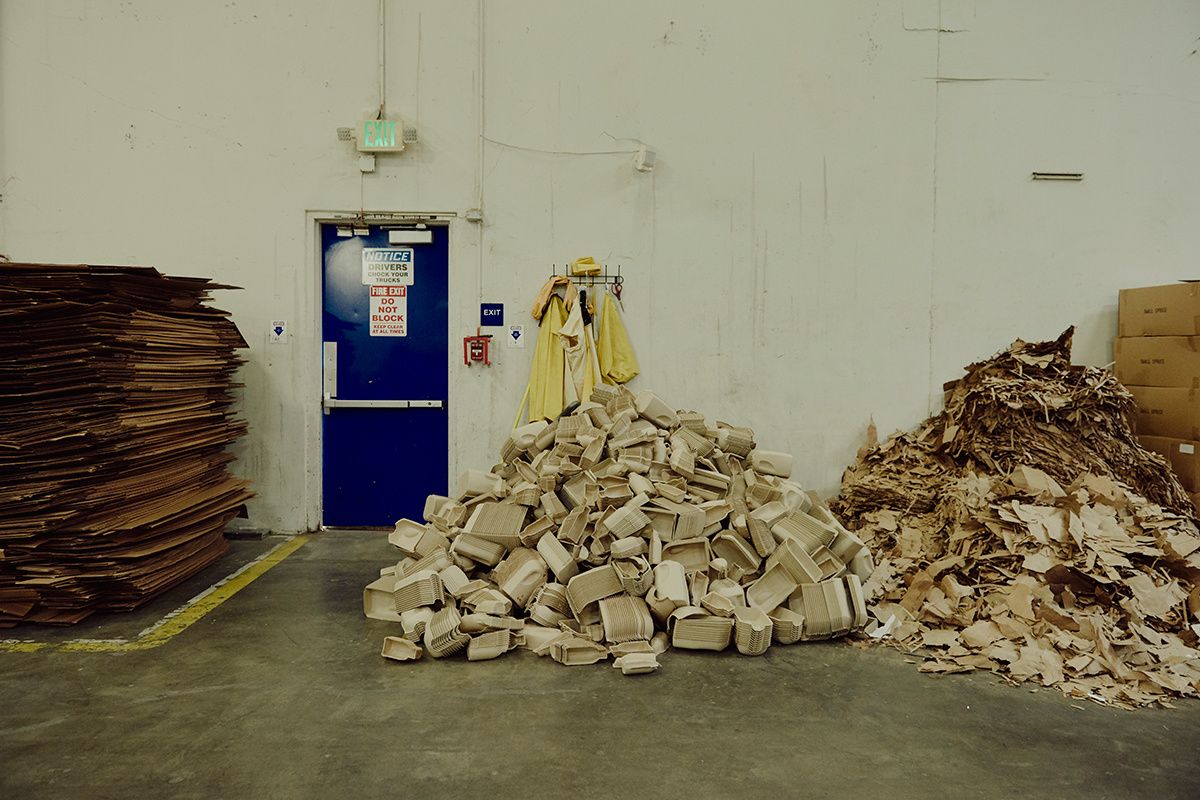 (Above) Paper that will be turned into Seed Phytonutrients bottles. 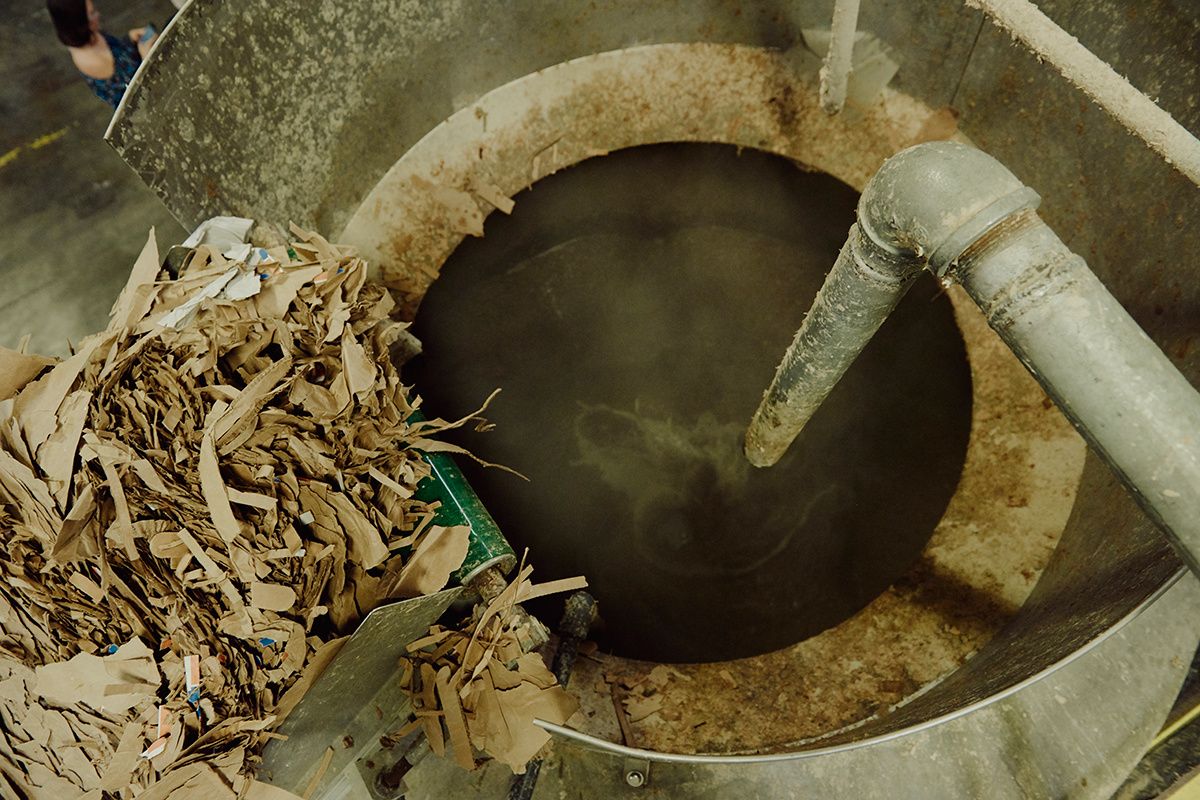 (Above) “Paper is an amazing material,” Corbett said. “All you have to do is throw it back into a vat of water, and it turns back into its fiber form—and then you can make packaging with it.”

Wolf remembers the meeting well. “They needed a big influx to help them move their technology from something that was labor-intensive to something sustainable from a business perspective.” His proposal: He’d provide funding to develop a new packaging concept if Ecologic agreed to meet their ecological requests. 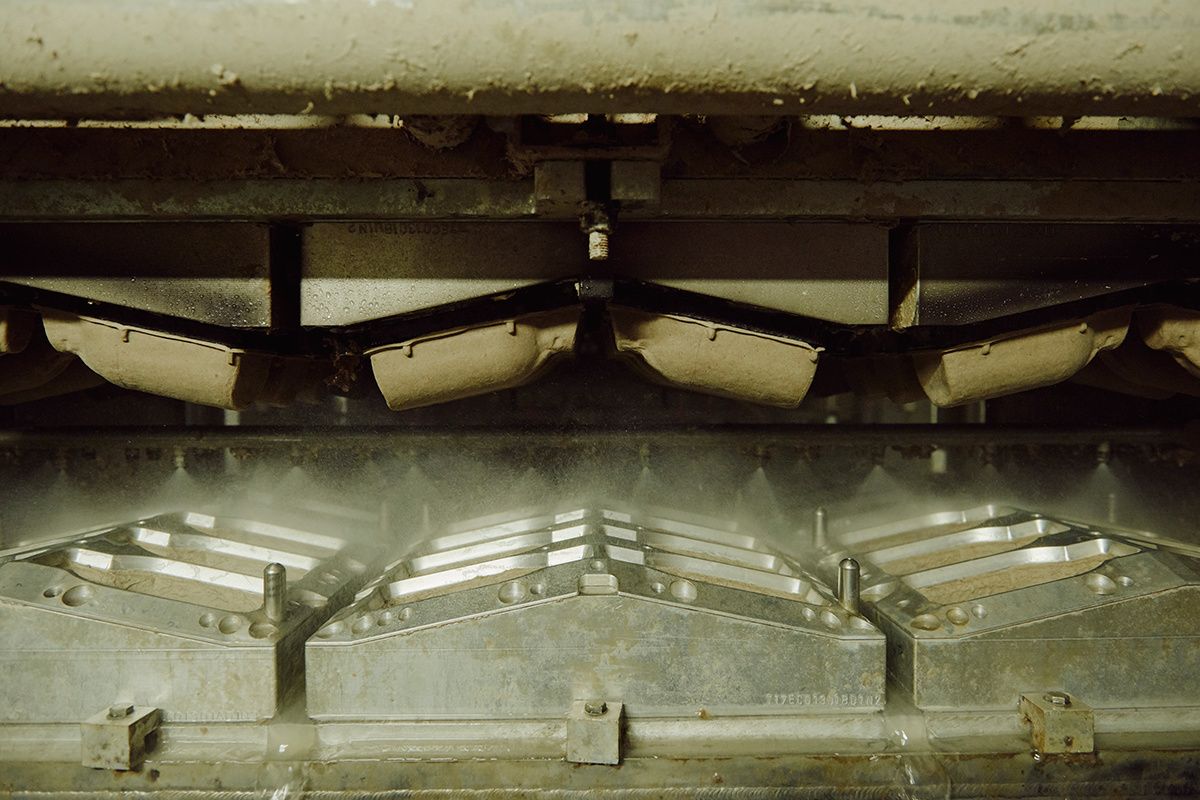 (Above) Specially designed molds transform a fibrous paste into the sturdy paper packaging for Seed Phytonutrients. These bottles have an interlocking closure, which eliminates the need for glue.

Corbett was game. “We approached it one step at a time,” she said. By adding a combination of earth minerals, they created a water-resistant paper bottle that could stand up to the pressures of a shower. Instead of glue, the bottle uses a clever interlocking design that’s just as sturdy. The interior liner (made with food-grade recycled plastic) is 60 percent thinner than typical plastic bottles. A unique pump evacuates up to 98 percent of the available shampoo—a consumer-pleasing innovation that also lightens the carbon footprint. What’s more, the containers can be shipped nested, making them far more efficient to transport than traditional packaging. 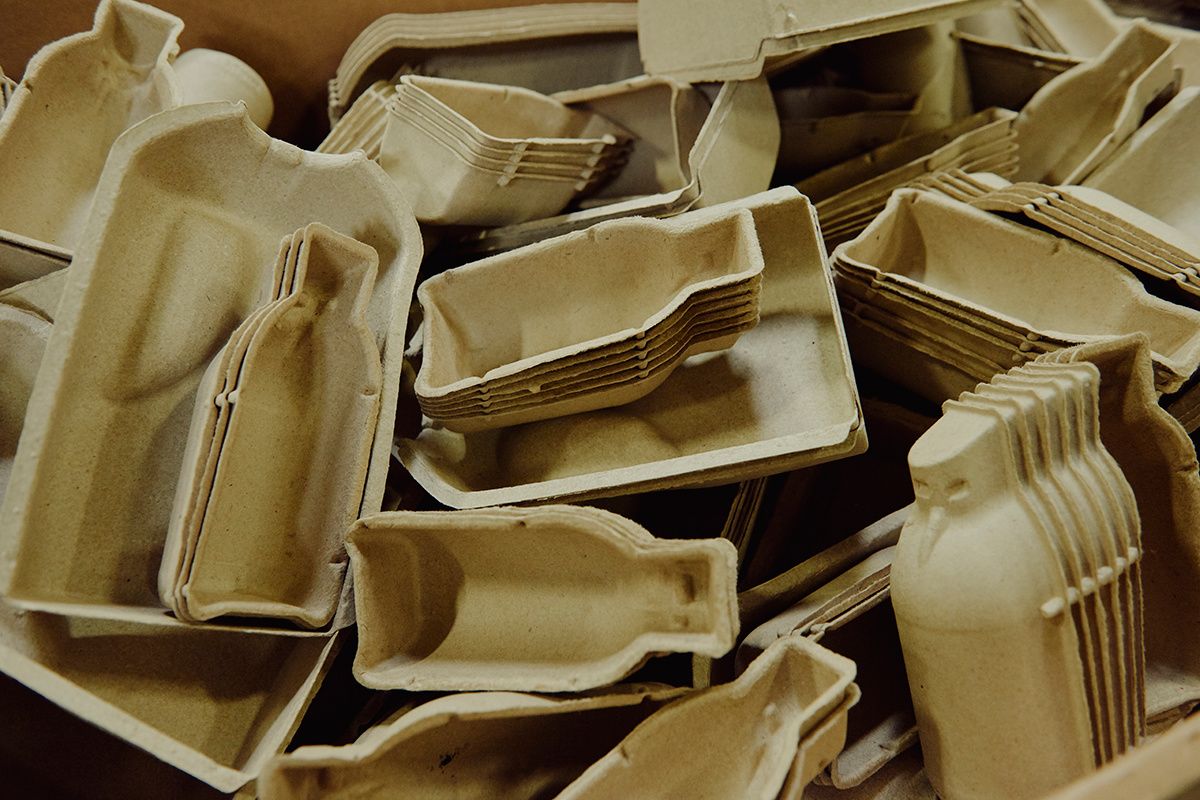 (Above) Ecologic’s water-resistant paper bottles can be shipped nested. “This bottle is better for the environment,” Corbett says, “and we’re changing the conversation around materials in packaging.”

The resulting bottle just may be the most ecologically sound in the world of beauty. “It’s totally new—nobody has done this in our industry,” Schienvar said. “It’s stylish, it’s clean-looking, it’s a really strong bottle.” Each one comes with a hidden gift inside, too: a packet of organic seeds from the Hudson Valley Seed Company, a farm-based heirloom seed producer in upstate New York, meant to encourage consumers to grow their own plants at home and participate in the cycle.

As proud as the Seed and Ecologic teams are of their accomplishment, this is just the beginning. “We use post-consumer paper now,” Schienvar said. “But soon, we’ll be making these containers from our own waste paper and cardboard boxes.” That will then create a closed loop, which will bring Seed one step closer to the ideal vision of zero waste. 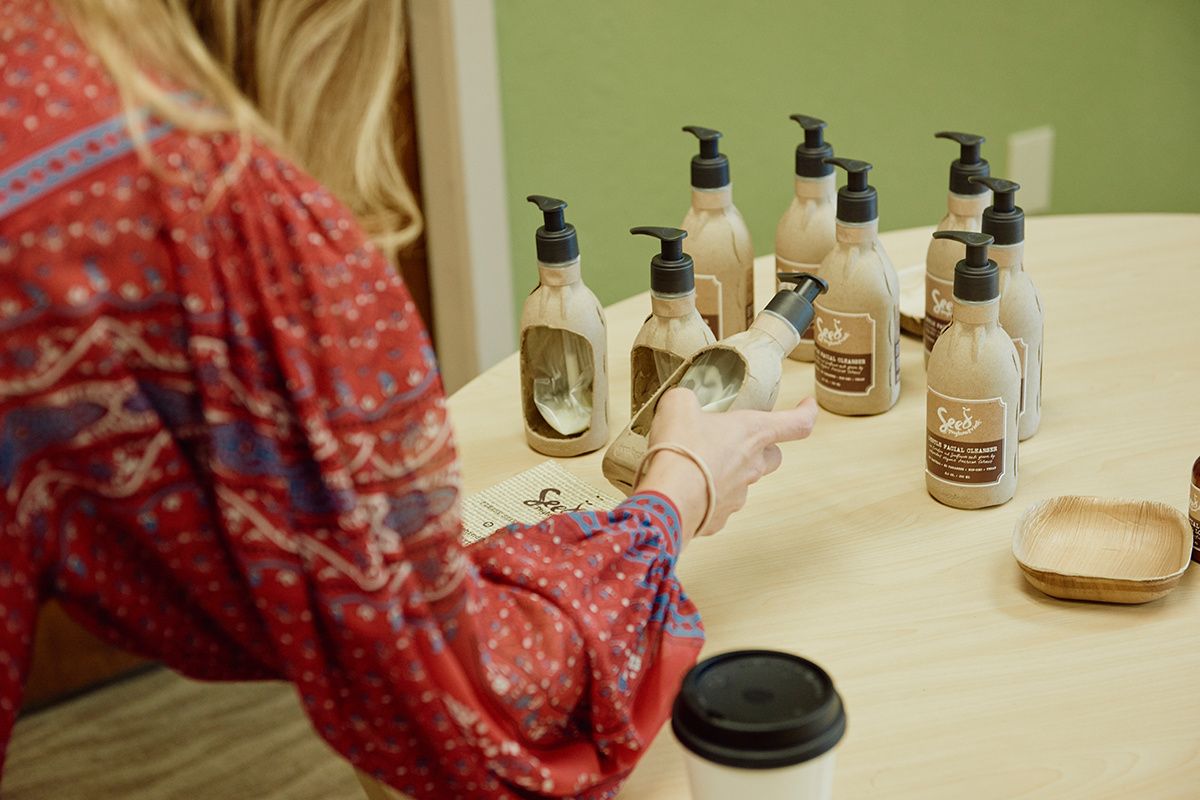 (Above) The inner part of Seed Phytonutrients’ bottles is just as smart. The plastic liner is so thin—95 percent thinner than conventional bottles—that it collapses as it’s used. Its unique design uses fewer resources and allows consumers to use almost every drop of product. “This is truthfully one of the biggest innovations in terms of lightening the carbon footprint,” Corbett said.

Ecologic is back on its feet. Thanks to the Seed Phytonutrients partnership, the company has proven its new technology and has the machinery to produce at scale. For Corbett, securing the future of the business has been hugely positive, but pushing the boundaries of sustainability is even more meaningful. “When I started the company, if you’d asked me whether my bottles would ever go in the shower, I’d have given you a big fat no,” she said. “But I made a big mental leap, because this group came together with common values around preservation and collaboration. I’m starting to see this come alive—and it is beautiful.”