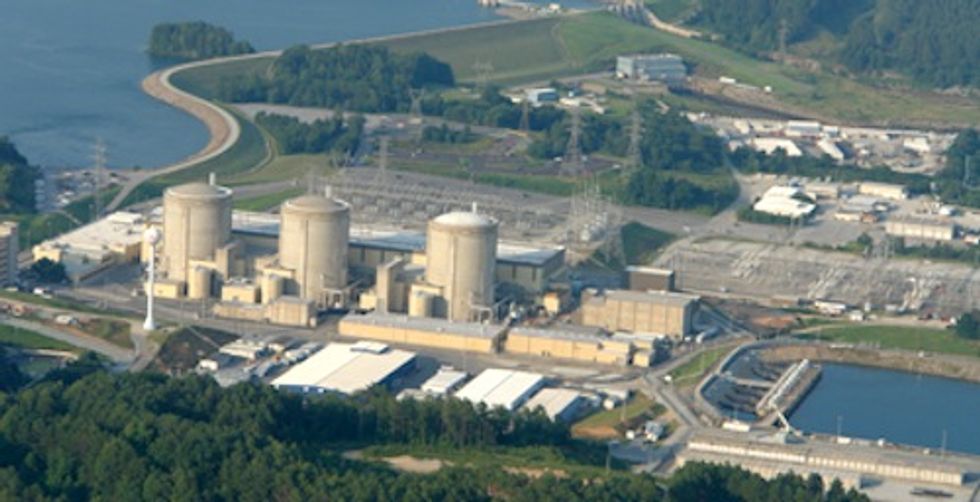 Duke Energy and government regulators have been hiding a not-so-little secret from the people of the Carolinas. Duke's Oconee nuclear power plant—three aged nuclear reactors 30 miles from Greenville, SC—is at risk of a meltdown should an upstream dam fail. If that were to happen, a meltdown of all three reactors on the scale of the Fukushima meltdowns and subsequent containment failure are virtual certainties according to U.S. Nuclear Regulatory Commission (NRC) documents obtained by Greenpeace.

We've also received a tip that the cost to upgrade the Oconee nuclear plant site to address this triple meltdown threat would cost Duke Energy a billion dollars.

So at Duke Energy's annual shareholder meeting yesterday in Charlotte, NC, I asked Duke CEO Jim Rogers a question about his company's dangerous nuke plants and the billion dollar cost to protect and upgrade. Tellingly, Jim Rogers did not dispute the billion dollar price tag nor the need to better defend Oconee from flood waters.

With respect to the billion dollar expenditures ... I mean the reality is we're the most capital intensive industry in the country, and what we try to do is—we reinvest and take our nuclear because you're thinking about our Oconee plant and how do you deal with the dam and that situation—that's a—our nuclear fleet because of the investments we make in it—over the last several years—our cheapest electricity—our nuclear fleet is the—provides electricity at a lower price than of other nuclear fleet in the United States. So cost is really important to our consumers—so our ability to invest that money and maintain that fleet is important ...

It's worth noting that Rogers didn't deny the potential billion dollar price tag of the Oconee repairs. Even for Duke, that's a serious amount of money.

I wonder if Duke's shareholders know that the company could end up being on the hook for that kind of a pricey fix?

Greenpeace appreciates Rogers acknowledging the threat to Oconee and the enormous expense of fixing it. If Rogers wants to do the most fiscally prudent thing for Duke's investors, he should retire the reactors. Duke and its regulators have known about this threat for decades and have utterly failed to address it. While regulation of nuclear power can be very complex, the issue at Oconee is pretty simple to understand. According to documents, the potential flood height at Duke Energy's Oconee nuclear plant is well above the height of Oconee's flood walls leaving important safety equipment vulnerable.

Does this sound familiar? It should. In Japan, the nuclear industry knew that the flood wall at Fukushima was too low and did nothing about it there either.

Other nuclear laden electric corporations face steep costs to upgrade old and dangerous reactors. Dominion recently testified that Fukushima fixes would cost their corporation between $30 and $40 million. But the billion dollar price tag to reduce the risks at Oconee is truly staggering. Rather than wasting a billion dollars on old reactors that will never be safe, Duke Energy should invest in renewable energy and efficiency. Wind turbines and solar panels don't threaten the Carolinas with the prospect of nuclear meltdowns.