Ebola and Climate Change: 'We Are Running Out of Time,' says World Bank President 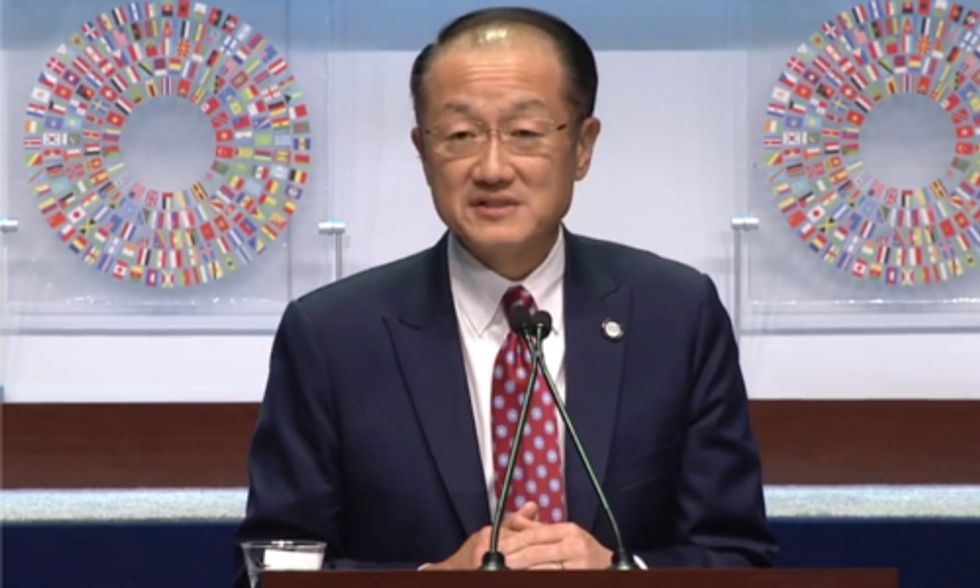 Not acting on climate change could have the same results as the inaction on Ebola with significant human and economic impact, warned World Bank Group president Jim Yong Kim in a speech Friday to the International Monetary Fund/World Bank Group annual meeting. He said that addressing both would further the World Bank's goal of ending extreme poverty by 2030.

"In a world where natural disasters, conflict, financial shocks and epidemics are becoming more frequent and destructive, we at the World Bank Group must do everything we can to become even more relevant," he said. "Indeed, we’ve been fully engaged lately in fighting two of these global threats: the Ebola epidemic and climate change."

"Ebola and climate change have a few things in common," he said. "Most importantly, we are running out of time to find solutions to both. Also, until very recently, the plans to fight them were either nonexistent or inadequate. And inaction is literally killing people–one because of the rapid spread of a deadly virus, the other from the poisoning of the atmosphere and the oceans. And finally, perhaps most critically from our point of view, resolving these problems is essential to development, whether from the perspective of human suffering, economic growth or public health."

Kim, an infectious disease physician, called the initial global response to Ebola "inadequate and slow" but said "Once engaged, we’ve moved with creativity, speed and purpose." He said that the World Bank's world on climate change over the last two years provided a blueprint for its response to Ebola.

"Soon after I started at the World Bank [July 2012], I asked my team a simple question: What’s the plan to fight climate change?" he said. "The responses received from our staff and even from leaders in the climate change community were mostly tactical: new technologies here, some efficiencies there. While important, they were not equal to the challenge of keeping a global increase in temperature below 2 degrees Celsius. So, working with others, we developed our own strategy that we hoped could take us a long way toward achieving this objective."

"At the start of the campaign, we counted 22 countries that would support this goal," said Kim. "With lobbying, the number kept climbing. Less than a week before the deadline, China, the world’s largest emitter of carbon dioxide, agreed to support carbon pricing. It became the 54th country to endorse the statement. In the four days before the [UN Climate] summit, 20 more countries signed on.  At the time of the announcement, 74 governments and more than 1,000 companies and investors had agreed to put a price on carbon. Together, the countries account for up to 54 percent of the world’s carbon emissions, 52 percent of the world’s GDP and nearly 50 percent of the world’s population."

"Later today, ministers, CEOs and the World Bank Climate Group will join me to turn this pledge into action," he said.

"We must maintain this commitment because increasing global fragility and volatility will challenge us more and more every day," he concluded. "In our march to end extreme poverty, conflict, typhoons, floods, droughts, financial shocks and epidemics may at times slow us. But they will not stop us. The Bank will be aggressive and creative and apply large-scale solutions to help states manage, prepare for, recover from and conquer these risks, so they can grow and flourish."