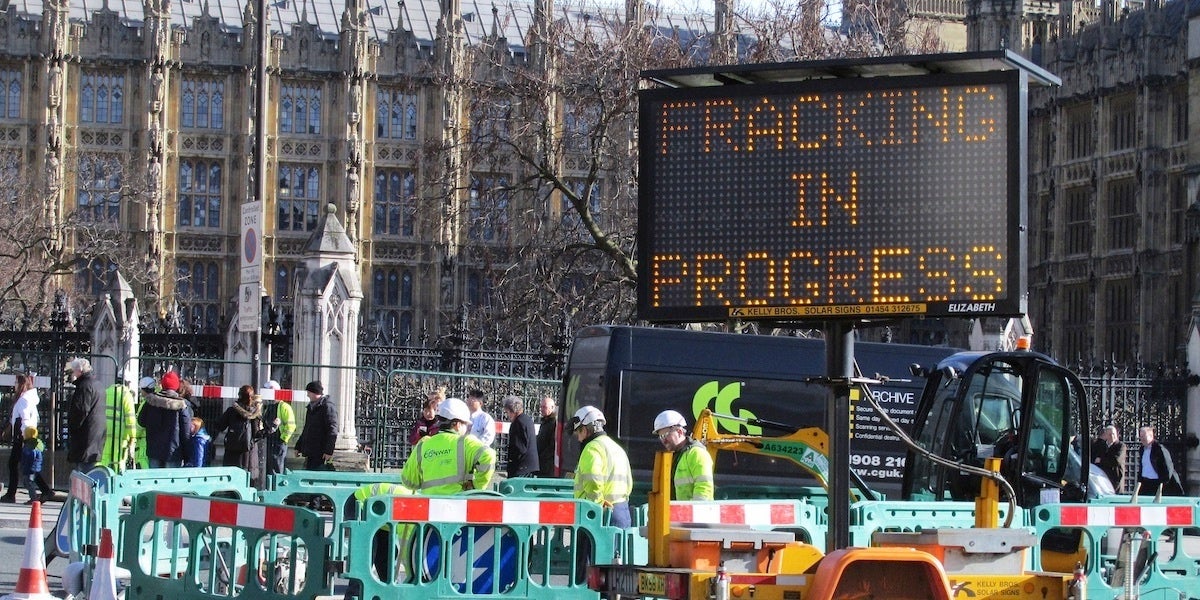 A string of small
earthquakes were reported the town of Blackpool just days after fracking operations restarted in England after a seven year hiatus, raising concerns that the controversial drilling process could eventually trigger bigger temblors.

Most of the earthquakes were at negative levels, meaning they were unnoticeable by residents. However, a 0.3-magnitude earthquake recorded on Friday hit amber on the government’s monitoring scale, meaning Cuadrilla has to “proceed at caution,”
Friends of the Earth Campaigner Rose Dickinson told Metro.co.uk.

Incidentally, fracking was halted at the Blackpool site in 2011 because of earthquakes. The largest had a magnitude of 2.3 and was felt locally.

“Since hydraulic fracturing operations started at Preston New Road, near Blackpool, we have detected some small earthquakes close to the area of operations,” BGS said, as quoted by the Guardian. “This is not unexpected since hydraulic fracturing is generally accompanied by micro-seismicity. The Oil and Gas Authority (OGA) has strict controls in place to ensure that operators manage the risk of induced seismicity.”

The government has a traffic-light system that immediately halts operations if seismic activity exceeds 0.5 on the Richter scale.

“All of the earthquakes detected at Preston New Road so far are below the threshold required to cease hydraulic fracturing,” BGS added.

Cuadrilla has shrugged off the minor seismic activity. It
retweeted a post from seismologist Stephen Hicks, who commented that Friday’s 0.3-magnitude earthquake could “set a new world record for one of the world’s smallest earthquakes that has been reported on by multiple media outlets.” 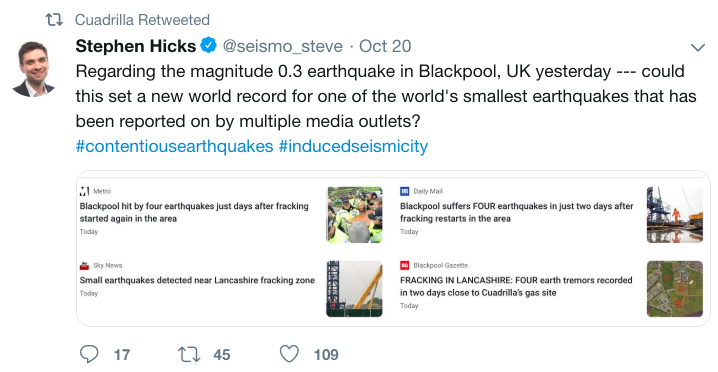 “The micro seismic events which have been recorded through the detailed monitoring Cuadrilla and the BGS are carrying out are successfully detecting events even at these very low levels,” the company said, per the Guardian. “This is not an ‘amber’ incident under the traffic light system operated by the OGA as we were not pumping fracturing fluid as part of our hydraulic fracturing operations at the time and the seismic events remain under 0.5 local magnitude.”

However, opponents said that the earthquakes are proof that fracking poses too many risks.

“Recent research by Stanford University shows that these tiny tremors can be indicators of bigger quakes to follow—like canaries in a coal-mine,” David Smythe, emeritus professor of geophysics at the University of Glasgow, told Metro.co.uk.

“The problem for Cuadrilla is that if it carries on regardless, bigger earthquakes may well be triggered,” Smythe continued. “To quote Cole Porter, ‘There may be trouble ahead.’ Cuadrilla’s only safe option is to cease fracking.”

With drilling underway, documents obtained by
Greenpeace’s Unearthed show that ministers are looking to weaken earthquake standards at fracking sites.

In a letter sent to Conservative MP Kevin Hollinrake in July, UK energy minister Claire Perry said the traffic-light system is “set at an explicitly cautious level but, as we gain experience in applying these measures, the trigger levels can be adjusted upwards without compromising the effectiveness of the controls.”

Earlier this month, a high court judge allowed drilling to restart in England despite years of anti-fracking protests and last-ditch legal bids.

Environmentalists warn that increased gas extraction not only jeopardizes the country’s emissions reduction targets, it also skirts warnings from the UN’s
Intergovernmental Panel on Climate Change report that says we must reduce greenhouse gas emissions by 45 percent below 2010 levels by 2030 in order to limit warming to 1.5 degrees Celsius above pre-industrial temperatures.