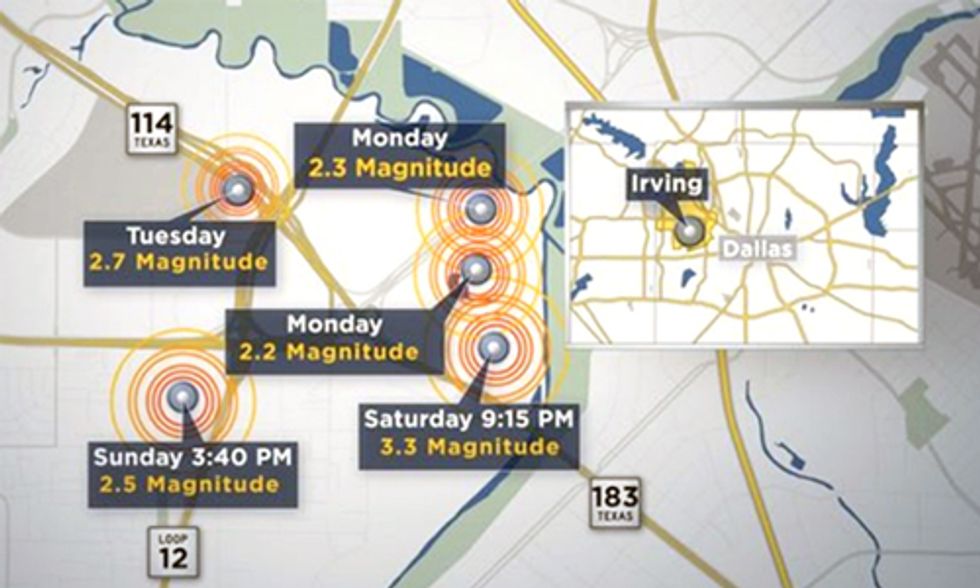 January has been a shaky month for Irving, Texas. Twelve earthquakes rattled the city during a 48-hour period at the end of the first week of the new year.

A map showing earthquakes in Texas the week of Nov. 24. Credit: NBC Dallas-Fort Worth

“It was very scary. I was at my job on the 4th floor in a cubicle surrounded by glass,” Tonya Rochelle Tatum, a loan specialist who works in Irving, told DeSmogBlog. “One quake seemed like it lasted five minutes. No one knew what to do.”

The quakes are relatively small, all of them registering under 4 on the Richter Scale. None has caused significant damage to property or resulted in bodily harm—but that hasn’t stopped people from worrying about their personal safety and property.

A Dallas suburb, Irving sits atop the Barnett Shale, a geologic formation rich in natural gas. Seismic activity is not something the region is known for, and the fact that the earthquakes are now in the news has many fearing their home values will drop.

Residents want to know what is causing the quakes, the likelihood they may increase in size and if anything can be done to stop them. A public meeting held Jan. 21 by city officials to address the earthquakes and other issues overflowed the 250-person capacity of the Irving Arts Center.

“Everywhere they’re fracking they have earthquakes,” someone in the audience yelled out, according to the Dallas Morning News.

As in Oklahoma, where more than 400 quakes rattled the state last year, officials had no answers for anxious residents and no plan of action. Irving mayor Beth Van Duyne simply reminded residents that there hasn’t been fracking in Irving for years and that the city had never permitted wastewater to be injected underground.

However, earthquakes do not respect municipal boundaries, and fracking industry activities—including the use of waste disposal wells, where wastewater from fracking sites is injected at high pressure into wells deep underground—is commonplace throughout the region surrounding the Dallas-Fort Worth metro center.

Earthquakes began in the Barnett Shale region only after the start of the fracking boom in 2008. Seismic activity has been reported in Arlington, Fort Worth, Cleburne and the Azle area, where last year they experienced an earthquake swarm.

The Texas Railroad Commission, the agency that regulates the oil and gas industry, came up with new rules for wastewater injection wells in October 2014. However, the regulators don’t believe there is scientific proof the wells have caused the earthquakes, rejecting a moratorium on their use in the Azle area, which was called for by some citizens.

The Commission decided not to investigate the seismic activity around Irving, according to StateImpact Texas, although spokesperson Ramona Nye says the Commission is monitoring the situation. “Specifically, there are no disposal wells in Dallas County, and there is only one natural gas well in the vicinity, and it is an inactive well,” Nye said.

If approved, the latest budget proposal by Joe Strauss, Republican Texas Speaker of the House, would fund a “TexNet Seismic Monitoring Program” at the University of Austin. The program would improve Texas’ seismic monitoring network and help get to the bottom of what is causing the surge in earthquakes.

Tatum has no doubt that the quakes are being caused by the fracking industry. Her husband, pastor and civil right activist Kyev Tatum, has been doing community outreach on the consequences of fracking for years. The Fort Worth church they worship in has cracks they believe were caused by seismic activity.

Irving sits above dormant fault lines. “Wherever we live, there are faults in the earth, so there is always a risk of earthquakes,” Brian Stump, a Southern Methodist University seismology professor, told Fox News. He is part of a team tasked with determining whether the earthquakes in Irving are the result of the fracking industry or natural events. Stump concedes that wastewater disposal can trigger small earthquakes, but the question of the cause of the quakes in Irving is still open.

Concerns About Quakes In Oklahoma

The USGS has not yet determined if the Irving quakes are industry related, either, but has stated that wastewater injection into deep geologic formations is a likely contributing factor to the increase in seismic activity.

The phenomenon known as “injection-induced seismicity” has been documented for nearly half a century, according to the USGS. In a recent report, the agency warned that the chances of a magnitude 5.5 or greater quake in central Oklahoma are rising due to the increasing seismic activity.

Already this year, 65 quakes over magnitude 3 have rattled Central Oklahoma, according to the tally kept by Stop Fracking Oklahoma. Concerns about the quakes are increasingly raised by residents.

A motion to ban oil and gas drilling in some parts of Stillwater was considered at a recent council meeting, but ultimately the council was split on rezoning an area to prevent mining activity including oil and gas.

Meanwhile, politicians in Oklahoma have introduced a new bill that would eliminate home rule to prevent municipalities from banning any facet of the fracking industry. Home rule gives municipalities control over zoning, and has been citied as a legal argument in fracking bans passed in New York State.

“The new bill shows they are scared of us because our numbers our growing,” Angela Spotts, Oklahoma homeowner and one of the founders of Stop Fracking Payne County, told DeSmogBlog.

Almost no one Spotts meets has any doubt the fracking industry is the cause of the quakes. However, many of these same people are unwilling to speak out since they or their family members work in the oil and gas industry. The same is true for those living in the Barnett Shale region in Texas.

Pastor Tatum has no doubt that the quakes are connected to the fracking industry, either. Referring to those in the area unwilling to make the connection, Tatum says, “It is like you are in a bad relationship that you know is bad but you just don’t do anything about it. God is a simple god. He made nothing complicated. We have made it complicated, so when you mess with his earth you cause things to happen.” Twelve earthquakes in less than 48 hours is his proof.

Jordan Davidson
Climate
A portion of roadway is flooded in Corpus Christi, Texas on Sept. 20, 2020 due to storm surge from Tropical Storm Beta in the Gulf of Mexico. Matt Pierce / iStock Editorial / Getty Images Plus

The National Hurricane Center has run out of names for tropical storms this year and has now moved on to the Greek alphabet during an extremely active hurricane season. Late Monday night, Tropical Storm Beta became the ninth named storm to make landfall. That's the first time so many named storms have made landfall since 1916, when Woodrow Wilson was president, according to NBC News.