More than 100 aftershocks reportedly followed the quake, which forced thousands to flee from their homes and subsequently sparked landslides that hindered rescue efforts.

According to Iranian Red Crescent, a disaster relief organization, the earthquake and its aftermath has left more than 70,000 people in need of emergency shelter.

Kokab Fard, a 49-year-old resident of the Iranian town Sarpol-e-Zahab, told the Associated Press (AP) that she was forced to leave all of her belongings behind as she escaped her collapsing apartment complex.

“Immediately after I managed to get out, the building collapsed,” Fard said. “I have no access to my belongings.”

“I thought at first that it was a huge bomb,” Majida Ameer, a resident of Baghdad, told Reuters. “But then I heard everyone around me screaming: “Earthquake!'”

In a video posted to Twitter on Monday, an Iranian resident slammed the government’s slow response to the earthquake, saying: “There has been no help yet, neither food nor water, no clothing, no tents, there is nothing.”

“There are no facilities yet. We’ve slept outside since last night. This is the condition of our homes,” the man said, surrounded by severely damaged buildings. “Our electricity, water, gas, phone lines are out, everything is completely out, the whole city has been destroyed, it is wrecked.” 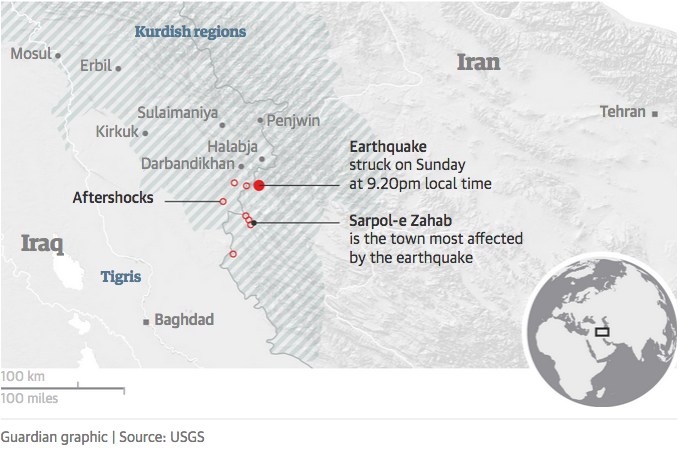 The earthquake was felt across the Middle East, and aftershocks reportedly reached Turkey, Pakistan, Lebanon and other nations.

As AP reported, the “quake was centered 19 miles (31 kilometers) outside the eastern Iraqi city of Halabja, according to the most recent measurements from the U.S. Geological Survey. It struck at 9:48 p.m. Iran time, just as people began retiring for the night. It could be felt on the Mediterranean coast, some 660 miles (1,000 kilometers) away.”

Images and videos of the earthquake and its devastating effects quickly spread on social media, and many world leaders expressed condolences and vowed to offer support in relief efforts.

328 Iranians die in massive #earthquake that hit Iran-Iraq border. A three-day mourning was announced in Kermanshah province of Iran, which was hit hardest by the tremor #IraqEarthquake #IranEarthquake pic.twitter.com/KtTZhYCGFS