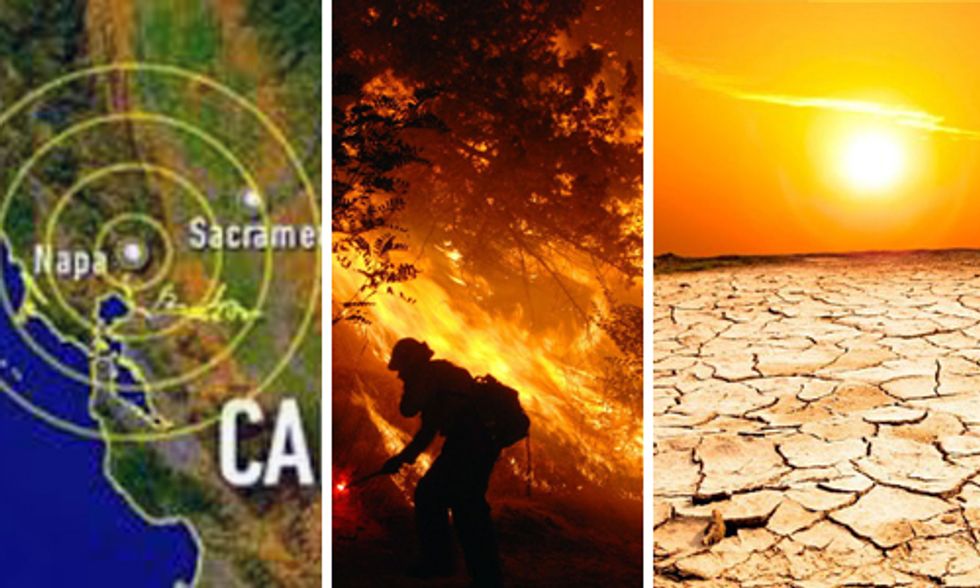 We probably can't blame the earthquake that hit California's Napa Valley this weekend on climate change. But it's one more thing that the beleaguered residents of the so-called "Golden State" have to deal with. And while we can't do much to address the fact that the state sits on geographical fault lines, other issues have a human element.

With its spate of natural disasters, some spurred by human action, California isn't looking like such a "Golden State."

The magnitude 6.0 earthquake, which occurred early Sunday morning, is the largest to hit the state since 1989's Loma Prieta quake. It injured several hundred people.

The earthquake is understandably dominating the headlines coming out of California, while the fallout from the state's record drought is being reported almost daily.

In East Porterville in the rural San Joaquin, several hundred homes have no tap water because their wells have dried up. That's due to an exceptionally low flow in the Tule River, which fills the wells.

Volunteers and county workers are delivering bottled water provided by the county to these homes, but those deliveries are only a stop-gap solution. The area's high poverty rate makes it difficult for residents to affordable ongoing solutions, such as digging new wells.

Tulare County has been hearing from residents about their diminished water supply since February, but the trickle of calls has become a gusher. The Fresno Bee reports that nearly 1,000 people are now impacted by the dry wells.

Up in the state's northwest corner in Trinity County, already threatened by salmon die-offs due to low water flow in the Salmon and Klamath rivers, a wildfire that started late Sunday afternoon is threatening homes in Weaverville. About 200 homes were evacuated as crews worked to build containment lines that had about 25 percent of the fire under control by this morning. But local officials said they were concerned about gusting winds and dry conditions causing the fire to flare up again.

The Redding, California newspaper the Redding Searchlight reports that four other wildfires are currently burning tens of thousands of acres in the area as well.

High temperatures and drought in the American West, both linked to climate change, lead to the dry conditions and tree deaths that enable more frequent and intense wildfires. The American wildfire season is getting longer, and the number of very large fires has doubled in California and many other states since the 1970s.

The California Drought: Who Gets Water and Who’s Hung Out to Dry?

Gov. Jerry Brown Discusses Role of Climate Change in California’s 10 Wildfires in the Past Week