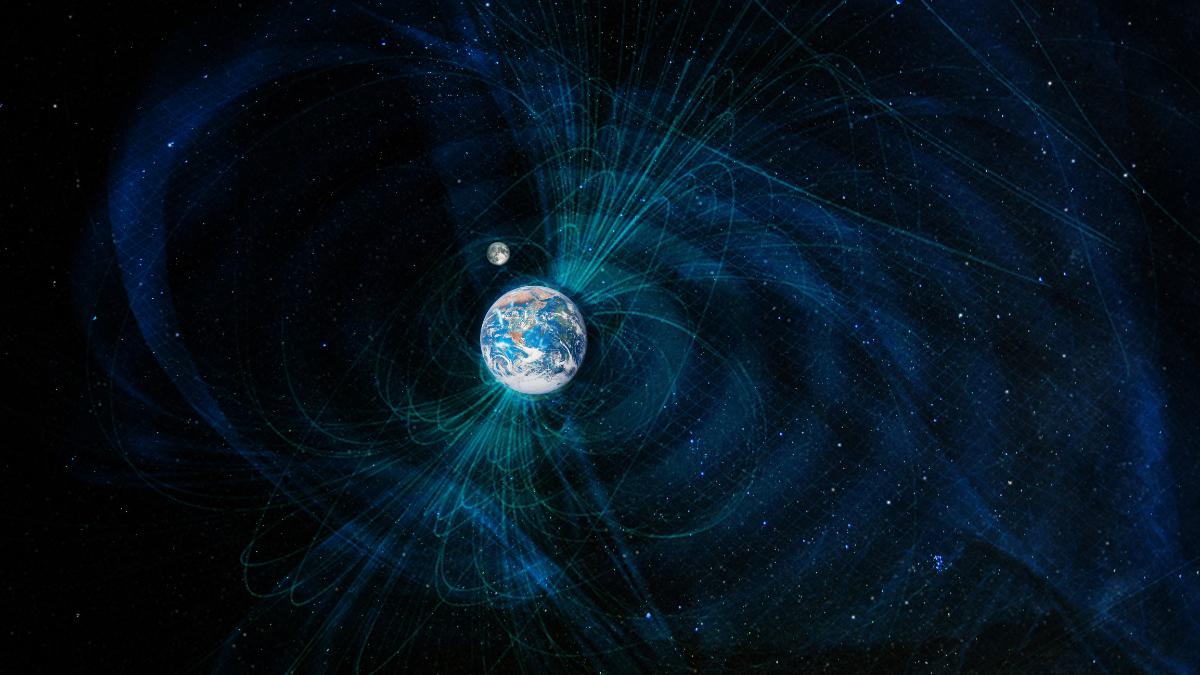 The world experienced a few centuries of apocalyptic conditions 42,000 years ago, triggered by a reversal of Earth’s magnetic poles combined with changes in the Sun’s behavior. That’s the key finding of our new multidisciplinary study, published in Science.

This last major geomagnetic reversal triggered a series of dramatic events that have far-reaching consequences for our planet. They read like the plot of a horror movie: the ozone layer was destroyed, electrical storms raged across the tropics, solar winds generated spectacular light shows (auroras), Arctic air poured across North America, ice sheets and glaciers surged and weather patterns shifted violently.

During these events, life on Earth was exposed to intense ultraviolet light, Neanderthals and giant animals known as megafauna went extinct, while modern humans sought protection in caves.

The magnetic north pole – where a compass needle points to – does not have a permanent location. Instead, it usually wobbles around close to the geographic north pole – the point around which Earth spins – over time due to movements within Earth’s core.

For reasons still not entirely clear, magnetic pole movements can sometimes be more extreme than a wobble. One of the most dramatic of these pole migrations took place some 42,000 years ago and is known as the Laschamps Excursion – named after the village where it was discovered in the French Massif Central.

The Laschamps Excursion has been recognized around the world, including most recently in Tasmania, Australia. But up until now, it has not been clear whether such magnetic changes had any impacts on climate and life on the planet. Our new work draws together multiple lines of evidence that strongly suggest the effects were indeed global and far-reaching.

To investigate what happened, we analyzed ancient New Zealand kauri trees that had been preserved in peat bogs and other sediments for more than 40,000 years. Using the annual growth rings in the kauri trees, we have been able to create a detailed timescale of how Earth’s atmosphere changed over this time. The trees revealed a prolonged spike in atmospheric radiocarbon levels caused by the collapse of Earth’s magnetic field as the poles switched, providing a way of precisely linking widely geographically dispersed records.

“The kauri trees are like the Rosetta Stone, helping us tie together records of environmental change in caves, ice cores, and peat bogs around the world,” said professor Alan Cooper, who co-led this research project.

Using the newly-created timescale, we were able to show that tropical Pacific rain belts and the Southern Ocean westerly winds abruptly shifted at the same time, bringing arid conditions to places like Australia at the same time as a range of megafauna, including giant kangaroos and giant wombats went extinct. Further north, the vast Laurentide Ice Sheet rapidly grew across the eastern U.S. and Canada, while in Europe the Neanderthals spiraled into extinction.

Working with a computer program that simulated the global interactions between chemistry and the climate, we investigated the impact of a weaker magnetic field and changes in the Sun’s strength. Importantly, during the magnetic switch, the strength of the magnetic field plummeted to less than 6% of what it is today. A compass back then would struggle to even find north.

With essentially no magnetic field, our planet totally lost its very effective shield against cosmic radiation, and many more of these very penetrating particles from space could access the top of the atmosphere. On top of this, the Sun experienced several “grand solar minima” throughout this period, during which the overall solar activity was generally much lower but also more unstable, sending out numerous massive solar flares that allowed more powerful ionizing cosmic rays to reach Earth.

Our models showed that this combination of factors had an amplifying effect. The high energy cosmic rays from the galaxy and also enormous bursts of cosmic rays from solar flares were able to penetrate the upper atmosphere, charging the particles in the air and causing chemical changes that drove the loss of stratospheric ozone.

The modeled chemistry-climate simulations are consistent with the environmental shifts observed in many natural climate and environmental change archives. These conditions would have also extended the dazzling light shows of the aurora across the world – at times, nights would have been as bright as daytime. We suggest the dramatic changes and unprecedented high UV levels caused early humans to seek shelter in caves, explaining the apparent sudden flowering of cave art across the world 42,000 years ago.

It must have seemed like the end of days.

Because of the coincidence of seemingly random cosmic events and the extreme environmental changes found around the world 42,000 years ago, we have called this period the “Adams Event” – a tribute to the great science fiction writer Douglas Adams, who wrote The Hitchhiker’s Guide to the Galaxy and identified “42” as the answer to life, the universe and everything. Douglas Adams really was onto something big, and the remaining mystery is how he knew?

Chris Fogwill is a professor of glaciology and palaeoclimatology, and the head of school geography, geology and the environment and director of the Institute for Sustainable Futures, Keele University.

Alan Hogg is a professor and director of the Carbon Dating Laboratory, University of Waikato.

Chris Turney is a professor of earth science and climate change, director of the Earth and Sustainability Science Research Centre, director of Chronos 14Carbon-Cycle Facility, and UNSW director of the ARC Centre for Excellence in Australian Biodiversity and Heritage, UNSW.

Disclosure statements: Chris Fogwill receives funding from UKRI and the Australian Research Council. A huge thanks to professor Alan Cooper, honorary researcher at the South Australian Museum, who co-led this study, adjunct professor Ken McCracken and Dr. Jonathan Palmer at the University of New South Wales, Drew Lorrey at the New Zealand National Institute of Water and Atmospheric Research, Dr. Janet Willmshurst at Landcare Research and our co-authors on the published article.

Chris Turney receives funding from the Australian Research Council and is a scientific advisor to cleantech graphite company CarbonScape (https://www.carbonscape.com).