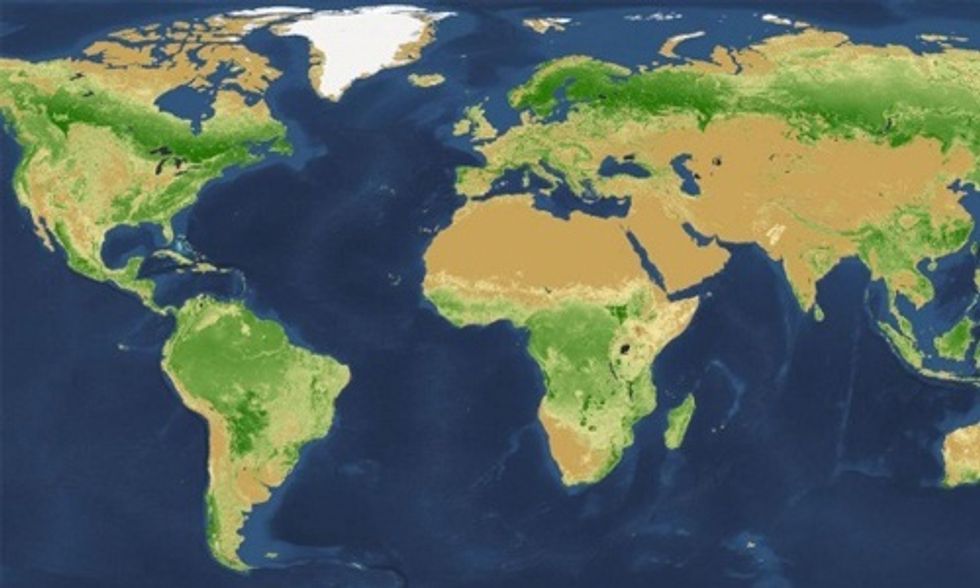 An international collaboration of scientists has just completed the ultimate green census—by calculating that the planet is home to 3.04 trillion trees. The latest estimate is far higher and almost certainly more accurate than any previous attempt. But the bad news is that humans are removing trees at the rate of 15 billion a year—and there are now about half as many as there were at the dawn of civilization.

For every person on Earth, there are 422 trees—in total, more than 3,000 billion deciduous or evergreen growths with woody trunks greater than 10 centimeters at breast height. The researchers based their study on close analysis of satellite imagery, and of data from 429,775 plots of trees as measured on the ground in 50 countries on every continent except Antarctica. Statistical Techniques They counted forests in 14 “biomes”—or different kinds of climate, soil and topography—and in places not normally associated with trees, such as deserts, savannah, swamps, tundra and high mountains. They then they used statistical techniques that could extend their sample density measurements to the whole terrestrial world. The scientists report in Nature journal that the tropical and subtropical forests are home to 1.39 trillion trees, while the boreal forests of the north contain 0.74 trillion, and the temperate zones hold 0.61 trillion. Trees create and hold soil, forests become “sponges” that conserve and recycle water, and trees and forests between them sustain most terrestrial life, and provide human societies with food, medicines, building materials and even fabrics. They also play a vital role in the management of the atmosphere, as absorbers of carbon dioxide. So an accurate “fix” on the numbers and density of forest landscapes becomes a first step in climate modeling, and in planning for the conservation of biodiversity. “Trees are among the most prominent and critical organisms on Earth, yet we are only recently beginning to comprehend their global extent and distribution,” says Thomas Crowther, an ecologist at the Yale School of Forestry and Environmental Studies and lead author of the study. “They store huge amounts of carbon, are essential for the cycling of nutrients, for water and air quality, and for countless human services. “Yet you ask people to estimate, within an order of magnitude, how many trees there are and they don’t know where to begin. I don’t know what I would have guessed, but I was certainly surprised to find that we were talking about trillions.” Read page 1 The study grew out of the United Nations Environment Programme’s Billion Tree Campaign, launched in 2006. Previous global estimates of tree populations were based on satellite imagery, and the best guess had been that the total was just over 400 billion trees, or 61 per person. This widely-accepted figure began to look uncertain as soon as researchers took a closer look at measurements made in one great tropical forest, which suggested there might be 390 billion trees in the Amazon basin alone. The international team found that the greatest densities of trees were in the sub-Arctic forests of Russia, Scandinavia and North America, which hold 24 percent of the world’s woodland. The largest forest areas were in the tropics, which are home to about 43 percent of the world’s trees. The temperate zones contain 22 percent of all trees.

Sub-Arctic forests in regions such as Scandinavia hold almost a quarter of the world’s woodland. Photo credit: Per Ola Wiberg via Wikimedia Commons

But although the total surprised researchers, the fact remains that the tree cover has fallen by 46 percent since the end of the last Ice Age. As human populations have grown, more and more forests have been cleared, and humans now fell or burn 15 billion trees a year. “We’ve nearly halved the number of trees on the planet, and we’ve seen the impacts on climate and human health as a result,” Dr Crowther says. “This study highlights how much more effort is needed if we are to restore healthy forests worldwide.” Scientists welcomed the study—although there were some reservations. Helen McKay, who heads the Centre for Sustainable Forestry and Climate Change at the UK Forestry Commission’s Forest Research agency, said: “Trees and forests are essential to a sustainable future for the Earth, and we welcome this paper’s contribution to our developing understanding of tree density in the world’s major biomes. Valuable Evidence “The findings will provide scientists, forest managers and policy-makers with valuable evidence, although additional information on the size, species and management of the trees in these biomes is needed to inform our view of the forests’ sustainability.” But Martin Lukac, a forest scientist at the University of Reading in the UK, has misgivings. “One of my biggest concerns,” he said, “is the method used to calculate the total number of trees. “The researchers looked only at areas categorised as ‘forest’ to calculate the total number of trees. In the UK, for example, this accounts for only 13 percent of the British land area and ignores the rest, even though we know that Britain has millions of trees growing in areas that would not be classified as forest. “The study states that forests with a higher density of trees store more carbon than those with fewer trees. This is nonsense. In a normal forest, a lot of small trees will store less carbon than fewer large trees. “The previous estimate of trees in the world was 400 billion. The new estimate is 3 trillion large trees. There are so many margins of error in this study that the real number could be anything between the two—or even 10 times higher.” YOU MIGHT ALSO LIKE