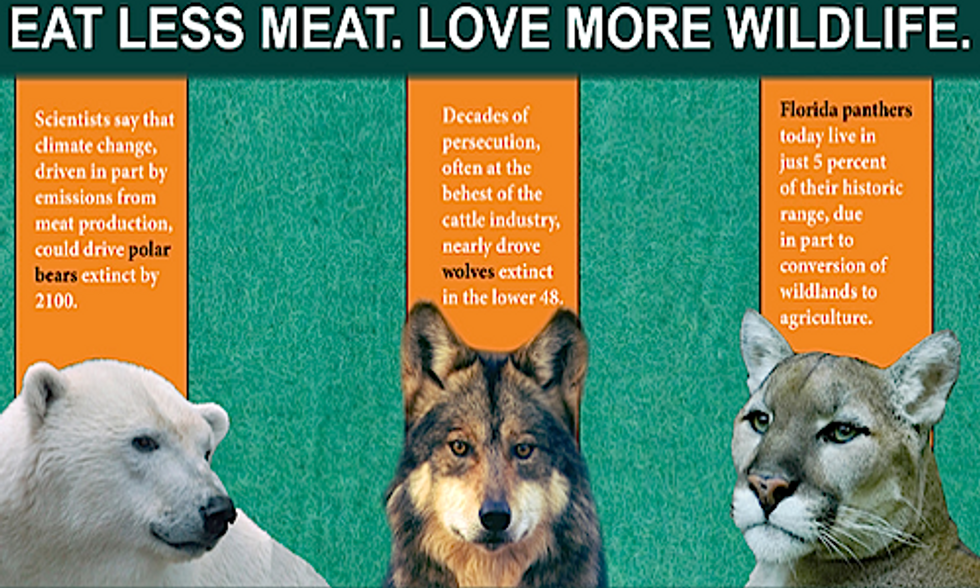 As growing global meat consumption drives accelerating deforestation, drought and other threats to endangered species, the Center for Biological Diversity launched a new campaign today urging Americans to “take extinction off your plate.” The campaign says eating less meat is one of the best ways people can reduce their environmental footprint.

“Many people don’t realize the devastating toll meat production has on wildlife and the planet,” said Stephanie Feldstein, population and sustainability director at the Center for Biological Diversity. “The livestock industry has nearly driven animals like wolves extinct, and it’s responsible for more greenhouse gas emissions than cars, trains and airplanes combined.”

The new campaign website features information about the impact of meat consumption on wildlife, the climate, habitat, water and land. It also includes resources to help people adopt an Earth-friendly diet and a pledge asking people to commit to reducing their meat consumption.

According to the “Earth-friendly Diet Pledge,” cutting just one-third of the meat from your diet can save as much as 340,667 gallons of water, more than 4,000 square feet of land and the greenhouse gas equivalent of driving 2,700 fewer miles a year.

“Americans already eat more meat per person than almost anyone else in the world, and our wildlife and climate are paying the price,” said Feldstein. “As our population grows, we’ll face worsening problems of livestock-driven drought, pollution, climate change and wildlife extinctions unless people start choosing to eat less meat.”

Earlier this year the Center for Biological Diversity surveyed its members to learn more about attitudes toward meat production among the conservation-minded. More than 75 percent said the biggest barrier to reducing meat consumption in the U.S. is lack of awareness about issues related to meat production, and 80 percent believe environmental groups should be doing more to reduce overall meat consumption as a way to address environmental problems.

The Center for Biological Diversity’s population and sustainability program has also distributed more than 500,000 Endangered Species Condoms as another way to highlight the connection between unsustainable human population growth and the effects on wildlife around the world.