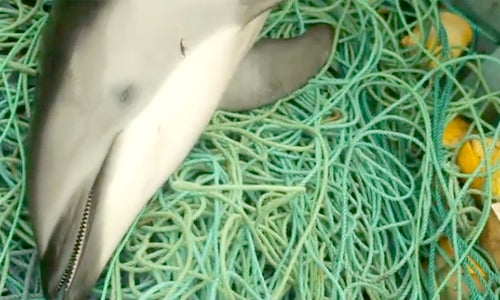 Shark meat consumption is on the rise in Peru, and the price of traditional bait is growing right along with it.

Those facts have led fisherman in places like Lima to target some of the 30 dolphin species found in the Pacific Ocean off the country’s coast, which is known as the most bioproductive oceanic stretch in the world with 10 percent of the world’s caught fish. However, the fishermen there do their dolphin targeting with harpoons.

Led by London-based reporter Jim Wickens, the Earth Focus segment discusses and shows the prolonged and unregulated deaths the mammals go through before their remains become shark bait. They are struck with harpoons and dragged on a line, leading them to a bloody demise. It’s a practice the entire industry and government knows about, but have not proved or cared to prove, scientist Stefan Austermühle, also executive director of Mundo Azul, said.

As many as 10,000 dolphins are killed each year in the area.

Wickens first spoke to a former shark fisherman who only wanted to be identified as José for an eyewitness account of dolphin hunting.

“Suddenly, I was surprised to see that they took out a harpoon and I said, ‘What’s this? What’s this for,'” José recalled. “And then I saw for the first time that it was for the killing of the dolphin. It really shocked me to see the cruel way they are hunted. Even when they’re still alive, you hit them or open them up or bleed them—anything to get the meat and you use it for bait.

“It’s brutal. You have to see it to understand how it makes you feel.”

All it took was anonymity and gas money for Wickens to get a seat on a boat with fishermen who hunted Pacific Ocean dolphins for a week. Once the crew was on the ocean, Wickens quickly realized that he was the only one present who seemed to have an issue with the cruel practice. The captain said he knew killing dolphins was illegal, while one of the fisherman calmly cuts up a dolphin and talks about how much money the killing saved, as opposed to buying expensive mackerel for bait.

“It’s never been caught before on film, and we managed to record it,” Wickens said of the hunting. “The killing of intelligent mammals like dolphins is terrible at the best of times.

“The killing of them to be used as fish bait is unthinkable.”

The embedded episode of Earth Focus also features clips and information on My Village, My Lobster, a one-hour documentary by filmmakers Brad Allgood and Josh Wolff on a practice that harms the environment as well as the humans who perform it—commercial lobster diving in Nicaragua. It has caused Miskito Indians to suffer the decompression disease epidemic also known as “the bends,” but it brings in about $20 million per year, as 90 percent of the lobsters caught are sold to premium U.S. restaurants and supermarkets.

“There used to be so many lobsters that you could walk out into the sea and just fish them out by hand,” Wolff said. “Then, the commercialization of lobster diving was introduced, and that sped up the depletion of the lobster stock closer to shore, and it’s just moving deeper and deeper and deeper.

“That, in turn, is causing these instances of decompression sickness because these men are diving deeper and they’re staying out for longer periods of time.”