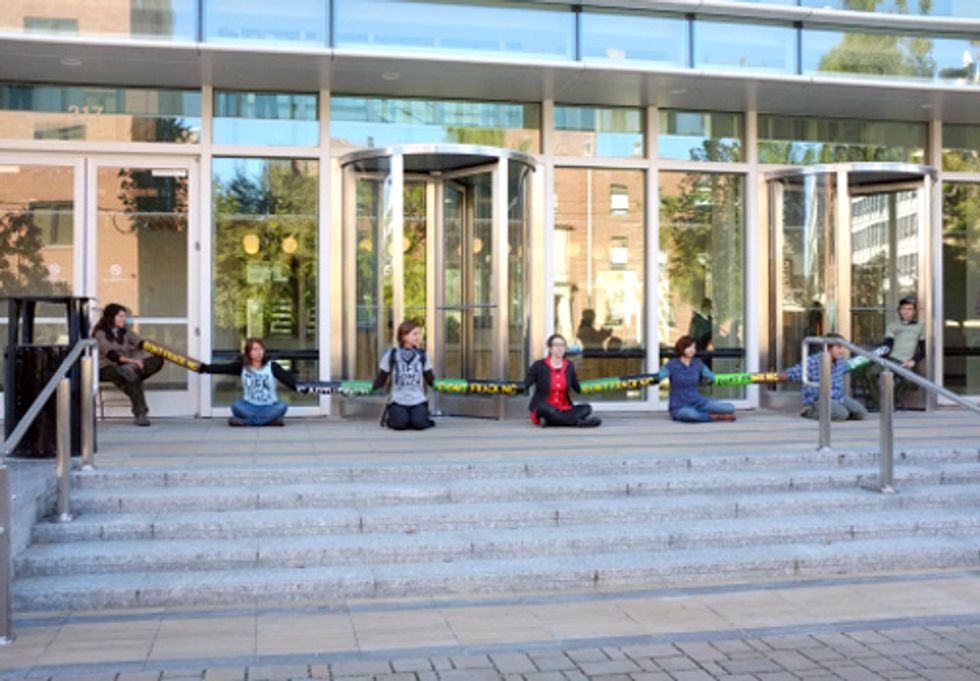 This morning seven people locked themselves to the front of the Department of Environmental and Natural Resources (DENR) headquarters in Raleigh, North Carolina, in protest of the state’s continued path towards the legalization of fracking for natural gas. Environmentalists across the state have organized and campaigned against hydrofracking legislation for more than a year, which resulted in a veto of SB 820 this past summer by Beverly Perdue.  The legislature overrode the veto shortly after during a controversial vote in which a mistaken ballot was cast for legalization, and the voter was refused a recast.

Police at the demonstration taped off the block as a crime scene and prevented press inside until protesters negotiated, agreeing to unlock if the press was allowed to enter. An hour and a half later the protesters unlocked without legal repercussions.

“All legal channels of protest have been exhausted,” says Earth First!er Emily Smith at the rally outside the action. “We’ve learned that the legislature and regulators will not protect the water we drink and air we breathe. It’s time for the public to take other types of action to stop hydrofracking."

This past spring NC DENR released a report that grossly underestimated the possible environmental risks of fracking. Since then, they have been working with the newly formed Mining and Energy Commission which includes several members that are closely linked to oil and gas including Ray Covington, a partner at NC Oil & Gas, who profits financially from an increase in leased lands for fracking; Chairman Jim Womack, a Lee County Commissioner and an oil industry supporter who claimed at a DENR public meeting that you were more likely to be hit by a meteor than have water contaminated by fracking; and Charles Holbrook a former employee of Chevron Oil.

“Having people who support and benefit from oil and gas extraction on a regulatory commission is like a fox guarding the henhouse.” The U.S. Environmental Protection Agency recently released a study that confirmed contamination of the water aquifer in Pavillion, Wyoming, with fracking fluids, but DENR has done nothing to modify their report.

“We’re not going to let industry destroy North Carolina like they have Pennsylvania,” says Smith referring to the numerous spills that have occurred in the highly fracked Marcellus Shale—including 4,700 gallons of hydrochloric acid spilled this year in Bradford County and a 30-foot methane geyser which erupted in Tioga county, PA. A blowout at one of Chesapeake Energy’s rigs in Wyoming burned this year, escaping methane for several days and more than 70 residents had to be evacuated. “Fracking is not only contaminating our land and water irreversibly, but it’s spewing massive amounts of methane, a greenhouse gas, into the atmosphere,” Smith added.

Today’s action occurred after the Piedmont Direct Action camp this past weekend in Pittsboro, NC which taught direct action skills to roughly 100 people.