Earth Day in the Shawnee: Taking a Stand Against Corporate Greed 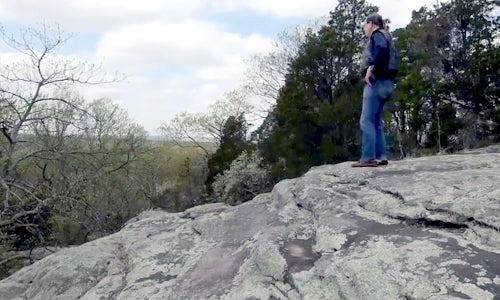 Few people understand the historical impact of coal mining like acclaimed poet Barney Bush in Shawnee hills of southern Illinois. The French, in fact, stumbled on coal outcroppings near the Shawnee in Illinois in the 17th century, launching the first coal industry on the American continent. By the early 19th Century, Thomas Jefferson helped to engineer the removal of Shawnee in southern Illinois, largely to obtain the great reserves of salt and coal. As a child, Bush’s own family, which had survived relocation, lost their home to strip-mining expansion: “When they strip-mined our forests and valley, they strip-mined me,” he once told me. As a teacher, Bush also witnessed strip-mining ruin on Navajo and Hopi lands at Black Mesa, in Arizona.

Bush is author of several award-winning collections of poetry and stories, including Inherit the Blood, which chronicled the story of a grandmother confronted with an encroaching coal mine, and “the final removal area.”

Living in the Shawnee Vinyard Indian Settlement near Rocky Branch, Illinois, one of the most controversial strip-mine expansions in recent memory, Bush reflects on the experience of the Shawnee, the cherished Shawnee hills and forests, and what today’s showdown means for the rest of the nation. —Jeff Biggers

“The entire planet is up for grabs by these corporate marauders but WE the people, organized in our common interests, can STOP this. We must recognize that we have, as a class, interests separate from the class of billionaires who profit from this destruction of the commons. They are turning everything into their own private property with which to create scarcity for the majority while they revel in wealth and luxury,” says Cathy Talbott, Co-host of OCCUPY THE AIRWAVES, WDBX Radio, Carbondale, IL.

Peabody hires spokespeople to insinuate its propaganda into the communities, to convince stunned residents that everything will be all right, and that there is no use to fight the inevitable loss of their homes, homes that hosted three or four generations or more of the same bloodlines, where they grew up, where they married, near where they buried their dead, reared more children and gathered in local churches. The spokespeople (usually from out of state or money-bribed locals) offer to rebuild the hills, leave the Earth, the farmlands, home sites in much better condition than when they first hustled, cajoled, and by reports, even threatened many of the residents into signing away all the homeland images of their lives.

“Small communities are regarded as resource colonies by corporations,” says Natalie Long, Community Environmental Legal Defense Fund. “We can challenge this by making our own laws that protect the communities.”

As true soulless humans, the corporate heads and their conscience-free investors and government supporters and bought-out county board members intend to meet their objectives at any cost and cite misleading, financial statistics worded to appeal to the greedy-hearted with the doublespeak of JOBS. Rocky Branch community is not taking these shameless threats lying down but are displaying heartening signs of resistance to the most real, contemporary terrorism to invade the Americas, the destruction of Earth, air, water and the entirety of the historic Saline Valley.

If we are to learn from our history, these corporations should know that a large segment of the public can only be shoved so far before violent action, as a means of defense and protection of life, limb and property, is the only recourse. Then comes the “wringing of hands,” always after it’s too late.

“The industrial economy is a subject of the environment—not the other way around. If we don’t have a healthy biosphere it doesn’t matter how much money we have,” writes Dr. Greg McPherson, Research Forester with the U.S. Department of Agriculture Forest Service’s Pacific Southwest Research Center.

Join the citizens of Rocky Branch in recovering their homes. The rally cry of Rocky Branch and their supporters “We won’t stop until you do,” says it all about this new wave of resistance through the Heartland. Peabody has already destroyed old farm homes built with beautiful sandstone, log beams and made to endure the years but not the greed of strip mining, fracking and hilltop removal, has clear-cut the forests in spite of endangered species, and has intimidated citizens including elders and church people. As one of the Rocky Branch citizens who spoke at Town Hall in Harrisburg, IL on March 27, 2014, said, “This is our Trail of Tears.” At the very least, the failure of forced relocation in the 21st Century.

“One way or another, a life without conscience is a failed life.” —Martha Stout