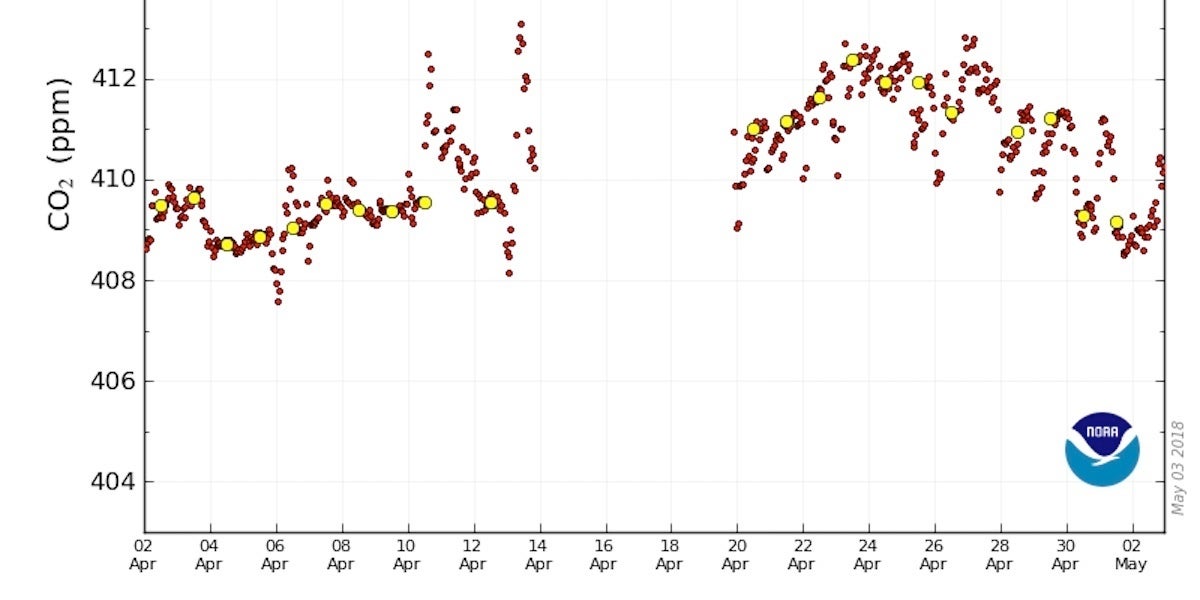 April was the first month in recorded history with an average concentration of atmospheric
carbon dioxide topping 410 parts per million (ppm).

This dubious new milestone was
recorded at the Mauna Loa Observatory in Hawaii by the Keeling Curve, a program of the Scripps Institution of Oceanography at the University of California San Diego.

To put this latest reading into perspective, at the beginning of the industrial revolution around 1880, the CO2 level stood at 280 ppm. It climbed to 315 ppm in 1958, the year Mauna Loa started record-keeping. It surpassed 400 ppm in 2013, before becoming a
dangerous new norm for several years. Then around mid-April, the planet breached 410 ppm for the first time.

These CO2 levels, according to NOAA’s climate department, haven’t been seen on Earth in 3 million years, when temperatures were 3.6° to 5.4°F warmer, and sea level was 50 to 80 feet higher than today

Carbon dioxide is a heat-trapping
greenhouse gas and the leading driver of man-made climate change.

“It’s essentially as simple as that,” he added.

Keeling told the Washington Post that Earth’s breaching of 1.5 or 2°C—the two temperature limits included in the Paris climate agreement—is not committed yet, but could get closer with time.

“It’s not going to be a sudden breakthrough, either,” Keeling added. “We’re just moving further and further into dangerous territory.”

Climate scientist Katharine Hayhoe tweeted, “As a scientist, what concerns me the most is what this continued rise actually means: that we are continuing full speed ahead with an unprecedented experiment with our planet, the only home we have.”