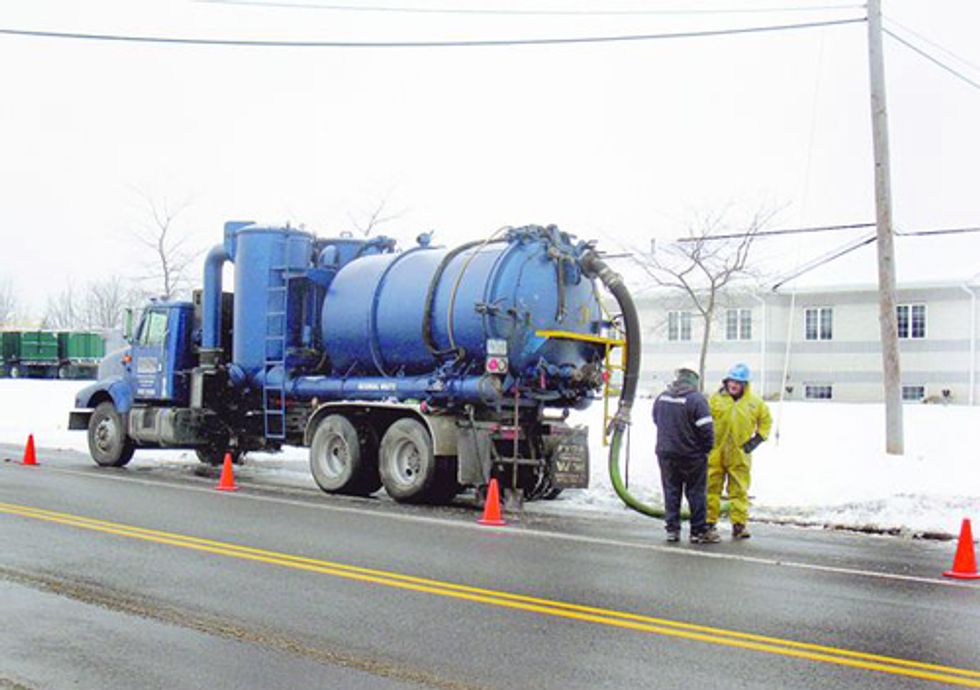 Employees of Tom’s Septic and Sewer in McDonald, who declined to give their names, clean brine Tuesday morning from a storm sewer along Salt Springs Road in Youngstown. In the background is the D&L Energy office building. The spill occurred last week on the property. Photo by Brenda J. Linert

A week after the dumping of at least 20,000 gallons of toxic and potentially radioactive fracking waste into a storm drain that empties into a tributary of the Mahoning River in Youngstown, Ohio, by Hard Rock Excavating, state regulators have yet to disclose information about the quantity of waste and the chemicals involved. Environmental advocates are urging the state to act quickly to prosecute the perpetrator and look beyond the one incident to take more aggressive steps to protect the state’s public health and environment from future threats.

“The degree of chutzpah exhibited by Hard Rock in this instance is astounding—but it’s almost what you would expect in a state where we have one enforcement staffer for every 2,000 oil and gas wells,” said Julian Boggs, Environment Ohio state policy advocate, noting that it was a company whistleblower, not state regulators, who uncovered the flagrant violation.

“We have a legislature that seems more interested in greasing the wheels for fracking companies than protecting public health and the environment—that only enables reckless behavior.”

As a case in point, last year’s major oil and gas bill, SB 315 was opposed by most of the state’s environmental groups. The bill nominally strengthened some drilling rules, but dealt a huge deal to public right-to-know by banning medical professionals from disclosing information about fracking chemicals.

Boggs lauded State Rep. Bob Hagan of Youngstown for his response to the spill. Rep. Hagan has personally investigated the site of the dumping and pushed state regulators to deal with the problem quickly and thoroughly. “If all our lawmakers showed the level of dedication and commitment to their constituents’ public health and the environment of their constituents that Rep. Hagan has during this process, Ohio would simply be a safer, healthier place to grow up and raise a family,” Boggs said.

“This oil spill, and the state’s inability to give handle the problem right away, is just further evidence that Ohio dove in head first to the fracking rush without really looking at all,” said Boggs. “Industry and policymakers seem to have no credible plan for what to do with all this waste, and how to keep Pennsylvania’s trash out of our backyard.” More than six million barrels of fracking waste from Pennsylvania and West Virginia were dumped in Ohio in 2011.

Fracking waste is a mixture of injected chemicals, sand and water, and corrosive salts and radioactive heavy metals that bubbles up from deep underground. As a result, waste presents an even broader array of health risks than fracking fluid itself, including radiation levels up to 3,600 times what is allowable in drinking water.

Some of the lenient regulation for fracking waste can be attributed to its exemption from the nation’s hazardous waste law—the Resource Conservation and Recovery Act. Environment Ohio and others believe that as a matter of course, Congress and the U.S. Environmental Protection Agency should move quickly to restore this loophole.

“Ultimately, this waste dilemma should really make our leaders stop and think twice about whether this whole fracking business is a good idea at all.” concluded Boggs.