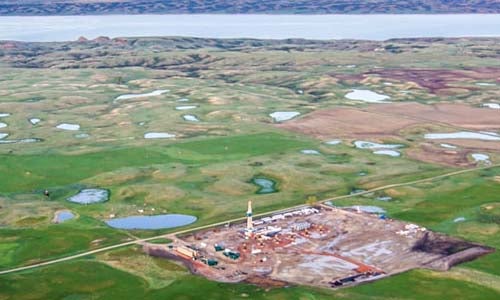 Thousands of oil and gas industry wastewater spills in North Dakota have caused “widespread” contamination from radioactive materials, heavy metals and corrosive salts, putting the health of people and wildlife at risk, researchers from Duke University concluded in a newly released peer-reviewed study. 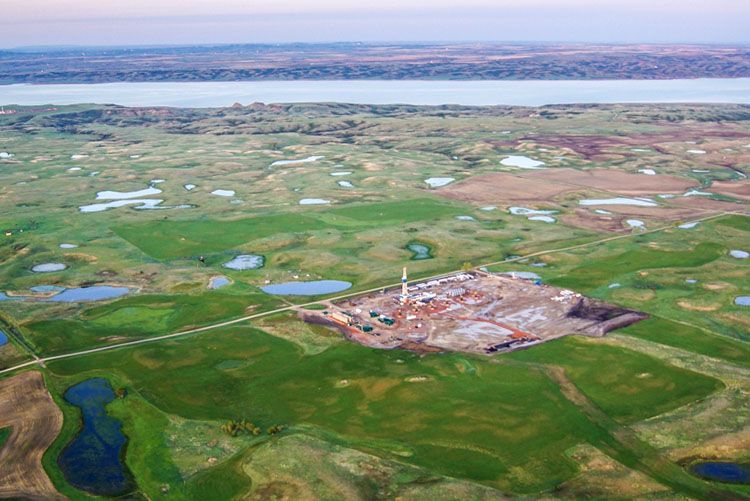 High levels of lead—the same heavy metal that infamously contaminated water in Flint, Michigan—as well as the radioactive element radium, were discovered near spill sites. One substance, selenium, was found in the state’s waters at levels as high as 35 times the federal thresholds set to protect fish, mussels and other wildlife, including those that people eat.

The pollution was found on land as well as in water. The soils in locations where wastewater spilled were laced with significant levels of radium and even higher levels of radium were discovered in the ground downstream from the spills’ origin points, showing that radioactive materials were soaking into the ground and building up as spills flowed over the ground, the researchers said.

The sheer number of spills in the past several years is striking. All told, the Duke University researchers mapped out a total of more than 3,900 accidental spills of oil and gas wastewater in North Dakota alone.

Contamination remained at the oldest spill site tested, where roughly 300 barrels of wastewater were released in a spill four years before the team of researchers arrived to take samples, demonstrating that any cleanup efforts at the site had been insufficient.

“Unlike spilled oil, which starts to break down in soil, these spilled brines consist of inorganic chemicals, metals and salts that are resistant to biodegradation,” said Nancy Lauer, a Duke University PhD student who was lead author of the study, which was published in Environmental Science & Technology. “They don’t go away; they stay.”

“This has created a legacy of radioactivity at spill sites,” she said.

The highest level of radium the scientists found in soil measured more than 4,600 Bequerels per kilogram [bq/kg]—which translates to roughly two and half times the levels of fracking-related radioactive contamination discovered in Pennsylvania in a 2013 report that drew national attention. To put those numbers in context, under North Dakota law, waste more than 185 bq/kg is considered too radioactive to dispose in regular landfills without a special permit or to haul on roads without a specific license from the state.

And that radioactive contamination—in some places more than 100 times the levels of radioactivity as found upstream from the spill—will be here to stay for millennia, the researchers concluded, unless unprecedented spill clean-up efforts are made.

“The results of this study indicate that the water contamination from brine spills is remarkably persistent in the environment, resulting in elevated levels of salts and trace elements that can be preserved in spill sites for at least months to years,” the study concluded. “The relatively long half-life of [Radium 226] (∼1600 years) suggests that [Radium] contamination in spill sites will remain for thousands of years.”

Cleanup efforts remain underway at three of the four sites that the Duke University research team sampled, a North Dakota State Health Department official asked to comment on the research told the Bismarck Tribune, while the fourth site had not yet been addressed. He criticized the researchers for failing to include any in-depth testing of sites where the most extensive types of cleanup efforts had been completed.

The four sites the researchers sampled instead included the locations of two of the biggest spills in the state’s history, including a spill of 2.9 million gallons in January 2015 and two areas where smaller spills occurred in 2011. The samples from the sites were collected in June 2015, with funding from the National Science Foundation and the Natural Resources Defense Council, an environmental group.

Over the past decade, roughly 9,700 wells have been drilled in North Dakota’s Bakken shale and Bottineu oilfield region—meaning that there has been over one spill reported to regulators for every three wells drilled. 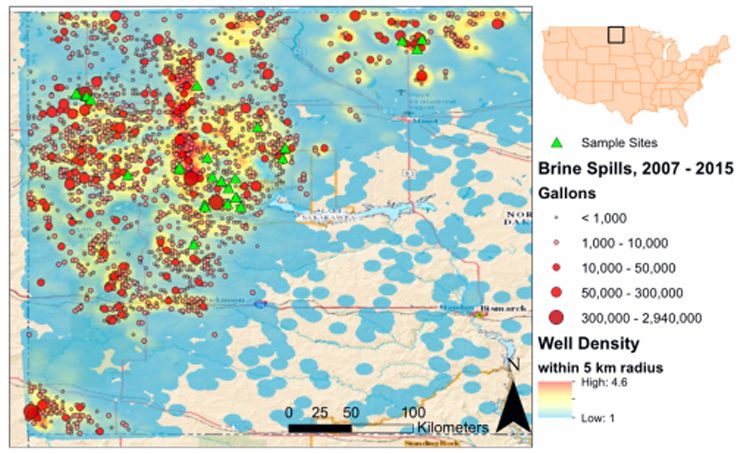 “Until now, research in many regions of the nation has shown that contamination from fracking has been fairly sporadic and inconsistent,” Avner Vengosh, professor of geochemistry and water quality at Duke’s Nicholas School of the Environment, said when the study was released. “In North Dakota, however, we find it is widespread and persistent, with clear evidence of direct water contamination from fracking.”

Dealing with wastewater generated by drilling and fracking has proved to be one of the shale industry’s most intractable problems. The industry often pumps its toxic waste underground in a process known as wastewater injection. Every day, roughly 2 billion gallons of oil and gas wastewater are injected into the ground nationwide, the Environmental Protection Agency estimates. Wastewater injection has been linked to swarms of earthquakes that have prompted a series of legal challenges.

The sheer volume of waste generated by the industry—particularly from the type of high volume horizontal hydraulic fracturing used to tap shale oil and gas—has often overwhelmed state regulators, especially because federal laws leave the waste exempt from hazardous waste handling laws, no matter how toxic or dangerous it might be, under an exception for the industry carved out in the 1980’s.

This leaves policing fracking waste up to state inspectors and not only do the rules vary widely from state to state, but enforcing those rules brings its own difficulties.

State inspectors have faced escalating workloads as budgets have often failed to keep pace with the industry’s rapid expansion. In North Dakota, the number of wells per inspector climbed from roughly 359 each in 2012 to 500 per inspector last year. In other states, the ratios are even more challenging, with Wyoming oil and gas well inspectors being responsible for more than 2,900 wells in 2015. And now, with the collapse of oil and gas prices, funds earmarked for oil and gas inspection have also nosedived in many states.

Lax enforcement may help explain why wastewater spills are so common across the U.S. More than 180 million gallons of wastewater was spilled between 2009 and 2014, according to an investigation by the Associated Press, which tallied the amount of wastewater spilled in the 21,651 accidents that were reported to state or federal regulators nationwide during that time.

The naturally occurring radioactive materials in that wastewater have drawn particular concern, partly because of their longevity in the environment and partly because the drilling industry enjoys looser federal standards for their radioactive waste than many other industries.

In January, North Dakota regulators further relaxed their standards for the dumping of radioactive materials, allowing many landfills in the state to accept drilling waste at levels higher than previously permitted, citing tough economic times for drillers.

The spills the Duke University researchers identified often resulted from a failure to maintain infrastructure including pipelines and storage tanks. Roughly half of the wastewater spilled came from failed pipelines, followed by leaks from valves and other pipe connectors and then tank leaks or overflows.

Risks associated with fracking in flood zones have drawn the attention of some federal agencies in the past, but perhaps not in a way that locals in affected areas might find helpful.

In 2012, the Federal Emergency Management Agency’s Hazard Mitigation Grant Program—a program designed to help people move away from areas subject to recurring floods—ran into a series of conflicts over oil and gas leases on properties that would otherwise be offered buy-outs. Some homeowners in Pennsylvania were denied the chance to participate in the program because of oil and gas leases or pipelines on their properties, as DeSmog previously reported.

In other words, it may be harder for those who have signed oil and gas or pipeline leases to abandon flood-prone areas, meaning that homeowners whose properties frequently flood could potentially face battles over cleanup costs without aid from the Federal Emergency Management Agency.

And the newly published research from North Dakota suggests that the less visible brines may ultimately be more of a long-lasting environmental hazard than the spilled oil.

Even though their study included only leaks that were reported to state regulators, the researchers warned that little is currently being done to clean up sites where spills have occurred—or even to track smaller spills, especially on reservation lands, where roughly a quarter of the state’s oil is produced.

This means that the real amount of wastewater spilled is likely even higher than currently reported.

“Many smaller spills have also occurred on tribal lands,” Prof. Vengosh said, “and as far as we know, no one is monitoring them.”