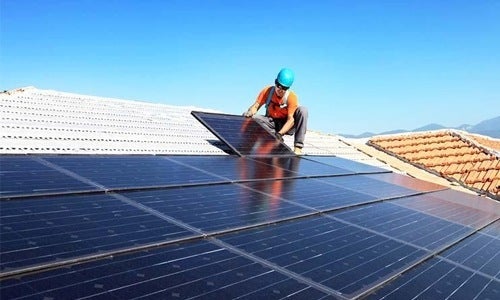 Around the nation, big utility companies are successfully lobbying lawmakers and regulators to restrict individual and corporate access to solar power, denying people significant savings on electricity bills and the opportunity to take part in the growing green energy economy.

In third-party solar financing, a non-utility company installs solar panels on a customer’s property at little or no up-front cost, sometimes selling the solar energy back to the customer at rates typically lower than a utility would charge.

Duke Energy, the largest utility in the U.S., has so far succeeded in keeping third-party solar illegal in North Carolina, but conservative and liberal factions alike are trying to change that, in different ways.

At least four states—Florida, Kentucky, Oklahoma and North Carolina—currently ban third-party sales of solar energy. Twenty states have murky laws and in the remaining 26, companies are allowed to install solar panels on customers’ roofs and sell energy generated from these panels to the customer. But major electric utilities that burn coal or natural gas are ill-equipped to change their business models to accommodate renewables, which explains their frequent opposition to state initiatives that expand solar access.

“When you get fully disrupted, you’ve got to find a new model,” Zach Lyman of the energy consulting firm Reluminati told Rolling Stone. “But utilities are not designed to move to new models; they never were. So they play an obstructionist role.”

Duke Energy has claimed that rooftop solar hurts the poor by causing rate increases and has even targeted black leaders with this misleading message.

Meanwhile, Duke Energy purchased a majority stake in California-based REC Solar, which operates solar projects and sells the energy to commercial customers in other states where third-party sales are legal.

A Conservative Push for Solar Freedom

Rep. Szoka hopes to pass something similar to the Energy Freedom Act next year. Seventy-nine percent of North Carolinians support third-party solar sales, but at least some in the legislature prefer to ignore the citizens’ preference. North Carolina lawmakers have also allowed the state’s solar tax credit to expire.

Rep. Szoka, a mortgage lender, was stationed at the largest military installation in the country, Fort Bragg, during his career as a Lieutenant Colonel in the U.S. Army. Now representing a district that surrounds the city of Fayetteville and includes Fort Bragg, Szoka first spoke of the military’s energy consumption when explaining why he proposed the bill.

Third-party solar sales to the military would save money while increasing energy security, Rep. Szoka argued, noting that on-site power generation would decrease the military’s dependence on the electric grid, which is vulnerable to attacks. Rep. Szoka also says his bill would help the military base to fulfill a Department of Defense mandate that facilities get 25 percent of their energy from renewable sources by 2025.

The state representative says there’s a strong free-market argument for third-party solar. “What made America great is free enterprise,” he says. “We need to unleash entrepreneurs in our state to do what they do best.”

Rep. Szoka’s 2015 bill to legalize third-party contracts had wide support from major corporations with business in the state including Wal-Mart, Target, Volvo and Macy’s. These and other businesses wrote a letter to all state legislators, saying that power purchase agreements (third-party sales) would allow them to avoid major up-front expenditures, the risks of operating solar arrays and fluctuating energy rates.

The legislature’s Joint Legislative Commission on Energy Policy had scheduled a March 1 press conference to announce the formation of a subcommittee that would study renewable energy issues such as third-party solar, net metering and the state’s Renewable Energy and Energy Efficiency Portfolio Standard (REPS). But on Feb. 29, they canceled the announcement because Rep. Mike Hager “reconsidered his position and withdrew his support for … the comprehensive study,” said Szoka.

Rep. Szoka had “a long conversation” with Hager this week but hasn’t yet succeeded in changing Hager’s mind.

Rep. Hager, who worked for 17 years at Duke Energy prior to his election as a Republican state representative, has been a staunch opponent of renewable energy, as Facing South’s Sue Sturgis has consistently reported.

Duke Energy is the top corporate contributor to Hager’s political campaigns, with Piedmont Natural Gas in second, according to the National Institute on Money in State Politics. Hager is also tied to the controversial corporate bill mill, American Legislative Exchange Council (ALEC), which has played a key role in attacks on solar in North Carolina and other states.

With Hager a vice-chair of the House committee on public utilities and co-chair of the Joint Legislative Commission on Energy Policy, renewables-friendly legislation will continue to face an uphill battle in the North Carolina General Assembly.

“Hager and I are on opposite sides of a few energy issues on solar, wind and REPS, but we’re in agreement [a study] is what’s good for the state,” Szoka told DeSmog earlier this month, before Hager cancelled the announcement. “I hope and pray we can negotiate.”

While Szoka has tried to free North Carolina from utility monopolies via legislation, environmental nonprofits have tried to affect change through activism. Seeking a clarification to state law on third-party financing, NC WARN installed solar panels on the roof of Faith Community Church in Greensboro, selling the electricity to the church at a rate much lower than Duke Energy would charge.

The case is now before the North Carolina Utilities Commission. NC WARN Executive Director Jim Warren says that the law does not strictly prohibit sales between nonprofits. Additionally, the state constitution prohibits monopolies, he says and Duke Energy is just that.

Despite Duke Energy’s calls for a $1,000-per-day fine on the small nonprofit, NC WARN continues defying the energy giant and maintains that it is acting lawfully.

SolarCity, other solar companies and NC Interfaith Power and Light (represented by the Southern Environmental Law Center) have joined the case as interveners on NC WARN’s side and the Christian Coalition of North Carolina has submitted a letter of support.

“It’s tragic and infuriating, at the very time when climate science experts are demanding that we begin making big reductions in carbon, for Duke Energy to use its clout in the wrong direction,” says Warren. “We’re going to continue throwing everything we can at changing their business model. We have no choice.”

Greenpeace is also standing up to Duke Energy and last year protested Duke Energy’s opposition to rooftop solar outside its annual shareholder meeting.

Monica Embrey, who leads Greenpeace’s national campaign on Duke Energy, says, “It’s incredibly problematic that Duke Energy is denying access to homeowners, churches, schools and small businesses while reaping all of the benefits for itself … Everyone deserves access to solar and renewable energy options.”